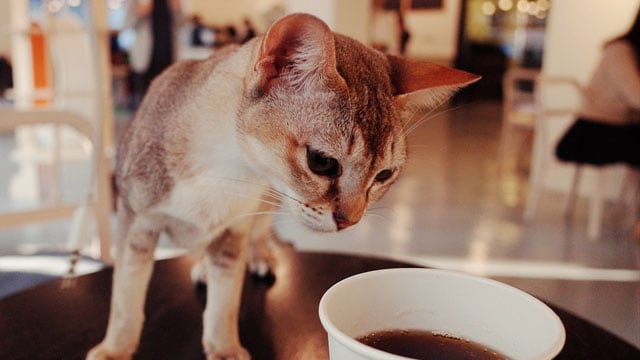 Mississauga has a pretty strong roster of exceptional indie cafes that offer everything from excellent brews to tasty bagels to impressive vinyl selections. When it comes to the coffee scene, the city has a lot to offer.

That said, the world (and even just Toronto) has a lot in the way of really wild cafes that stand out because they’re, well, crazy.

Or at least some are.

Here’s a look at some crazy nearby cafe concepts that we might want to consider co-opting, just because most people are into cats, a lot are into tiny teddies and some are very, very into Japanese French maids.

If you travel east to Toronto, you’ll find Uncle Tetsu’s Japanese Angel Cafe. There’s no other way to say it, the concept–exported from Japan and watered down a little for the typical North American palate–is straight up bizarre and full of fetishistic sexual undertones. While the Canadian incarnation is still a little…unique, it’s more fun than anything else and involves French maid outfits and live musical routines. Uncle Tetsu’s particular brand of cafe also includes its very famous cheesecake, so it would be nice if Mississauga residents could get an opportunity to sample the brand’s spongy wares closer to home and enjoy a little live J-Pop while they’re at it.

This concept is straight up adorable and ideal for anyone who wants to enjoy a latte while keeping their children entertained. It’s also a pretty cutesy date idea. Basically, a strange cafe called Teddy Story, a Thailand export, just set up shop in Toronto and is inviting guests to enjoy coffee and snacks and its collection of pretty precious Teddy House teddy bears. If you’ve ever wanted to enjoy some dessert while selecting an outfit (and perhaps even some accessories) for a teddy, this place might appeal to you. Perhaps one would do well in the Square One area in the city, as it’s basically a quainter Build-a-Bear with food and beverage.

In all honestly, it’s hard–nay, impossible–to argue that any city needs a poop cafe, but it’s amusing to reflect on their existence and wonder what the appeal is. This Asian export recently set up shop in Toronto’s Koreatown and it’s more toilet centered than anything else. Basically, poop cafes offer desserts served in toilet-style dishes (and not just any toilet–you can eat your food out of a western-style toilet, an old-world squat toilet, a urinal or a bathtub). The concept is pretty shocking, but despite the exceedingly off-putting theme, these types of establishments do boast a certain novelty factor that attracts an audience. Perhaps a place like this, tucked away in an industrial area, might draw out some locals who want to tee-hee at a sundae in a tiny urinal.

2) A Sizeable Board Game Cafe

If you have a hankering for beverages and Cards Against Humanity expansion packs, you can visit Snakes and Lattes in TO and get a tasty vanilla soy latte (or a beer, if that’s what you’re in the mood for). While Mississauga has a board game spot in Studio 89 and a few other select restaurants and cafes, it could use a cafe/bar that offers a sizeable and varied game selection. I’m not personally that into board games, but I have a few favourites and games are almost always better when accompanied by cocktails. A walkable area like Clarkson, Port Credit, Cooksville or City Centre would be perfect for a Scattegories and coffee hotspot.

We need one of these. Cat cafes are common in Asia and basically fuse friendly domestic cats and cafe-style offerings. Toronto has a small selection of cat cafes and they typically separate the kitties from eating/drinking customers for sanitation purposes. While North American cat cafes may not be quite as authentic as their Asian counterparts, they offer customers the opportunity to interact (and potentially adopt) cats who need a little TLC. Although the cafes are popular because they’re novel and cute, they can also connect transient felines with families who can give them forever homes. Also, all coffee tastes better when there’s an adorable animal nearby.