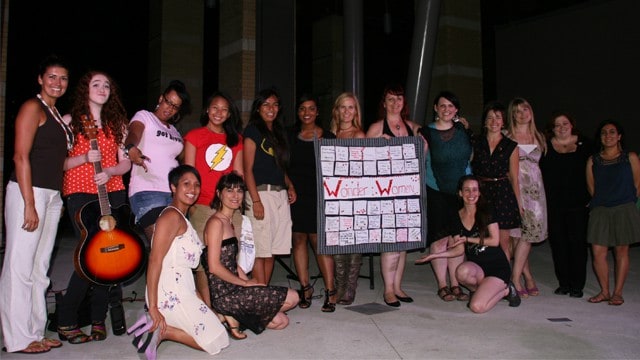 I had no idea of the Colombian population in Mississauga until I saw all the vocal fans that gathered at Celebration Square to watch their team play in the World Cup this past summer.

One of the most delicious street foods in Colombia is the empanada. If you have never had one, you don’t know what you’re missing.

These tasty empanadas have an outer crust made of cornmeal and the filling is usually beef and chicken with potatoes seasoned with a hogao (Colombian tomato and onion sauce) or hot sauce. Empanadas are usually deep-fried, which gives them a crispy yellow exterior, but the cornmeal pastry is deliciously soft and creamy on the inside.

After looking all over Mississauga, it’s no surprise that I found quite a few places that sell these delicious creations. Also, at many of these places you’ll see pre-made empanadas in a tray, and if you can wait for seven minutes, ask them to make them fresh for you.

Here are the top 5 places to get Colombian Empanadas:

5 – Todo Rico
Located in a plaza on Rathburn just west of Mavis is a Colombian Bakery directly beside Long & McQuade called Todo Rico Bakery. This place is a full-out Colombian restaurant with about 20 seats and a menu that features soups, rice with chicken and salad or beefsteak with chicharron (fried pork rinds, tastes so good) with rice and plantain or fish and more. But we were there for one reason and that was the empanadas. The empanadas were huge with the filling completely packed in. As you can see, the way they fold their empanadas are a little different than the way the rest do them, but they taste just as good. Eat them as soon as you get them or at least when thy cool down a bit, as that is when they taste the best. 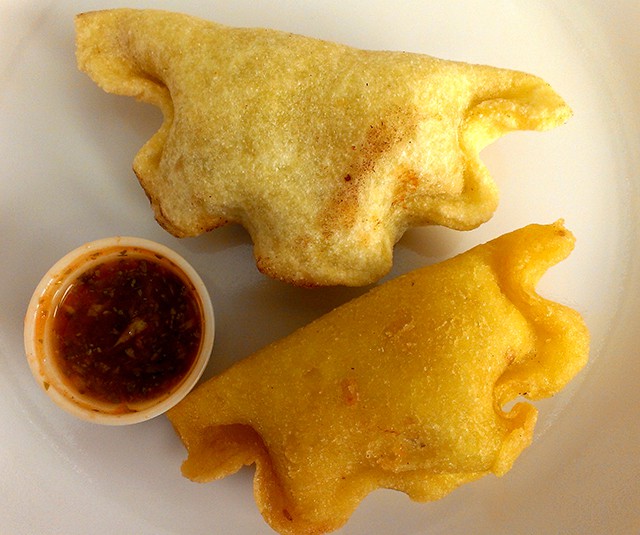 4 – My Empanada
New on the Colombian empanada scene is another 5/10 gem. Located in a plaza across the street from my old high school TLK is a place called My Empanada. They have been open for four months now and things are going really well. On the sign it says take out, dine-in or catering. This place is tiny, so there won’t be much room for dining in. The empanadas themselves are very flavourful and generously sized. The deep-fry was really good with the cornmeal crispy on the outside and soft on the inside. 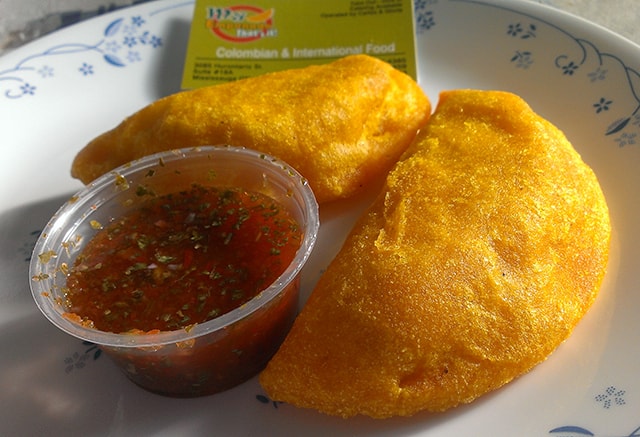 3 – Mississauga Flea Market
There is a lady at the international Food Court at the Mississauga Flea Market that serves latin food we always get our Colombian empanadas from. She fries the empanadas to order, so when you get them you have to wait a couple of minutes before you put them in your mouth. She also has the best hogao, as she makes it fresh that day since she is only open on weekends. She will throw in some peppers to make it interesting, so watch out for the heat. I cut the empanada in half and pour in the hogao to cool it down and eat it right away. 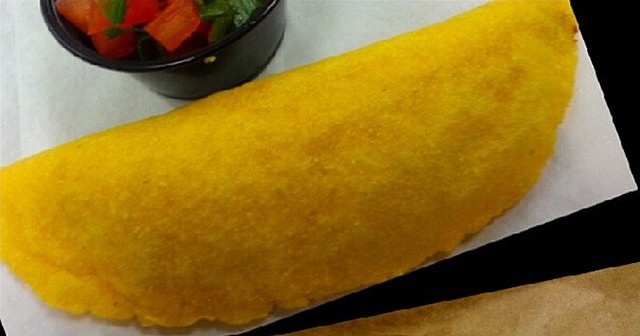 2 – Antojitos
Located on the eastern outskirts of Port Credit on Lakeshore is a little Colombian tuck shop called Antojitos. I love these types of places. These are the places that give Mississauga some character. When you walk in, there is a wall full of South American food products that you wouldn’t see in your every day grocery store. On the other side are the baked goods that we went there for — the empanadas! Antojitos sells a wide assortment of empanadas with different fillings, including beef, chicken, eggplant and even a Hawaiian pastry. Stick with the first three, as they are delicious and straight from the fryer. 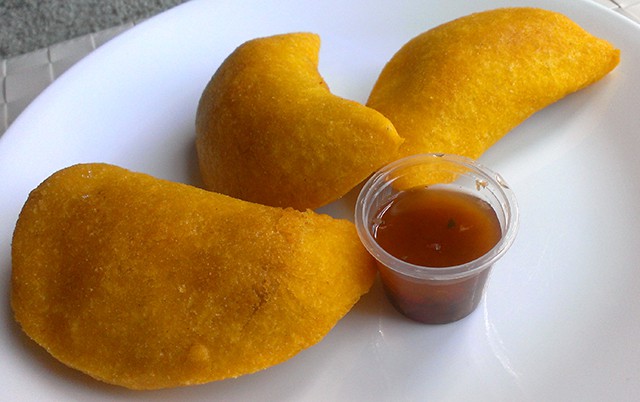 1 – Las Delicias
Las Delicias is located in a plaza near 5/10 (Dundas and Hurontario) where I spent most of my high school days at Mickeys (I just aged myself). As you drive in, you can tell the parking lot has not been resurfaced since the plaza was built in the early…I have no idea. But as you walk in, you can smell that this is a bakery at heart. They serve everything from empanadas to Buneulos and Pan de Bono to Arepas. We ordered two chicken and two beef empanadas and they were absolutely delicious. Their beef and chicken filling was the best tasting and deep-fried to perfection. A great balance.