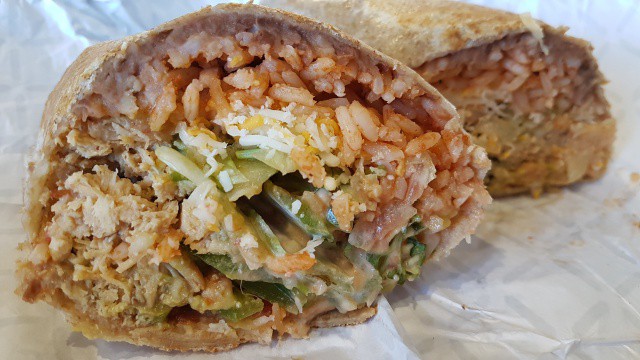 Whether you’re one of those people who cuts their burrito in half and saves the rest for later, or who must demolish their burrito in a solid 10 minutes or less, burritos are a staple in fast food, equally as awesome for a Wednesday afternoon lunch as they are for a 4 a.m. treat after partying.

But some burrito spots make ’em better than others.

Here are the top five burrito spots in Brampton:

MexiCados is a burrito joint in Brampton located in an industrial area near Steeles and Torbram, and walking in there was exciting! There are sombreros on the walls, it’s well-lit, and the customer service in on point – everyone working here is kind and helpful, to the point where they’ll recommend the best things to put on your burrito and go out of their way to give you things like a sample of extra sauce (try the butter chicken sauce!). Hopefully that’s not just because they’re new! Regardless, MexiCados serves a delicious burrito. It’s piping hot, fresh, enough to fill your stomach without going overboard and leaving you feeling bloated, and the toppings are portioned nicely. You can get burritos like grilled chicken, steak, fired up shrimp, turkey carnitas, veggie softrito, veggie and guac, ground beef, and bean and cheese. The chicken on mine was tender and plentiful. If you like your spice, get them to put extra hot sauce on your burrito. Over all a solid burrito experience here.

Down Main Street on Gillingham Drive is where you’ll find good ol’ Fat Bastard. Hands down the best part about Fat Bastard is their variety. There are so. Many. Different. Kinds. Of. Burritos! Jerk chicken, butter chicken, pad thai chicken, sauteed shrimp, organic tofu, battered fish the burrito of your dreams is likely at Fat Bastard. With unique toppings like chips and noodles for your burrito, they even have homemade hot sauce, free guac (I repeat – GUAC IS FREE), Mexican Coke that’s actually imported from Mexico, and you can top off your meal with a deep fried mars bar or churro chips for dessert. There’s also a small seating space here, but it’s clean and surprisingly comfortable. The service is also friendly, you’re usually greeted with a smile here.

Fresh Burrito is exactly that – fresh. They pride themselves on fresh toppings and are pretty impressive seeing as they’ve been open right beside Burrito Boyz on Queen Street for some months now. This burrito joint, which also operates a location in Kitchener, makes all of its dishes in-house from scratch and offers such traditional Mexican fare as burritos (of course), quesadillas, tacos, and even churros! The restaurant also serves homemade guacamole and its very own signature red salsa and salsa verde (better known as green salsa), and they make their own burrito sauce with sour cream and mayo. The regular-sized chicken burrito is massive – it’s all you can eat and then an extra inch or two. The burrito contains huge chunks of chicken, so you’ll likely be taking larger bites than normal, but it’s all good because the burrito is on point, though they could ease up on the rice. This super casual spot has very little seating space, so be prepared to grab and go.

Chico Burrito just opened in March at Steeles and Kennedy in the same plaza as Brewster’s Roadhouse, and it has already won our hearts! Here you’ll find burritos and quesadillas stuffed with chicken, steak, shrimp, veggie soy, and fish. Then, there are giant portions of nachos that you can top with similar things and even “Salad Fiestas” with your choice of chicken or shrimp with avocado. Chico Burrito also serves up bacon burritos, quesadillas, nachos, and more! So if you’re a bacon-lover, you’ll want to head over ASAP. The service is also quick and kind, so that’s a bonus. As for seating space, the burrito joint is quite small, but there are two tall tables and some stool-style seating along the wall if you choose to chow down at the resto. Overall, Chico Burrito makes a great burrito in a clean space and a prime location – yum! Honestly, it rivals Burrito Boyz…

Brampton is blessed to have a few Burrito Boyz locations, like one at Hurontario and Steeles and one approaching Queen and Kennedy, right beside Fresh Burrito. Burrito Boyz has perfected the concept of organized and fast service, which is a big plus. Though most places on this list are on a food delivery service like Skip the Dishes or Just Eat, Burrito Boyz blatantly advertises that you can call in your order and swing by to pick it up. Any way you grab your burrito from here, it’s bound to be fast and delicious. The Queen location, in particular, serves the best burritos. There’s the perfect amount of every ingredient in here, making each burrito solid with not too much or too little of anything. Burrito Boyz boasts classic burritos with tasty burrito sauce and sour cream, a hot sauce that will burn your mouth if you put on too much, there’s always a good amount of guac on the burrito if you ask for it, and the meat is well-seasoned, tender, cut into manageable chunks, and you can mix up the meat in your burrito. I highly recommend the chicken and shrimp. And one of the best parts? The location on Queen is open until 4 a.m. on Fridays and Saturdays so you can kick your burrito craving almost 24 hours a day on weekends. Yum!