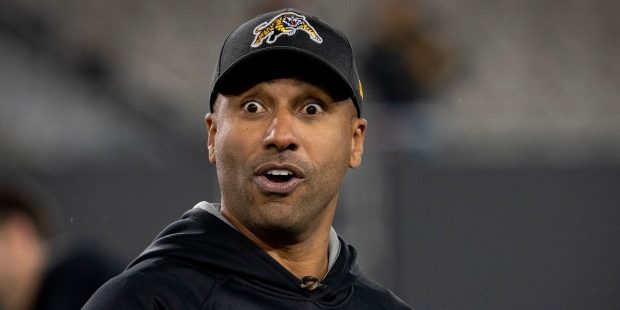 Hamilton Tiger-Cats coach Orlondo Steinauer is one of 13 inductees into the Canadian Football Hall of Fame in 2022. (The Canadian Press)

Orlondo Steinauer will feel right at home when the Canadian Football Hall of Fame and Museum honours the Tiger-Cats’ head coach and president of football operations, as well as 12 others on June 18, 2022. The 13 inductees will be on-hand when Hamilton opens its home CFL schedule against the Calgary Stampeders at Tim Hortons Field.

The honourees will officially be inducted into the hall of fame on the eve of the Ticats’ home opener.

The six inductees from the 2020 class and the seven from 2021 will formally join the CFHOF following two years of delays due to the health and safety concerns posed by the COVID-19 pandemic.

The previously announced 2020 class includes offensive linemen Clyde Brock and Freddie Childress, as well as quarterbacks Henry Burris and Greg Vavra. Former Calgary Stampeders head coach and current president and general manager John Hufnagel will be one of two inductees in the builder category — the other will be former Saint Mary’s University coach and athletic director Larry Uteck, who died in 2002.

The 2021 class will include defensive linemen Will Johnson and Mike Walker, wide receiver Nik Lewis, and defensive backs Orlondo Steinauer and Don Wilson. In the builder category, the hall will welcome former Montreal Alouettes head coach Marv Levy and the sixth commissioner of the CFL, Doug Mitchell.