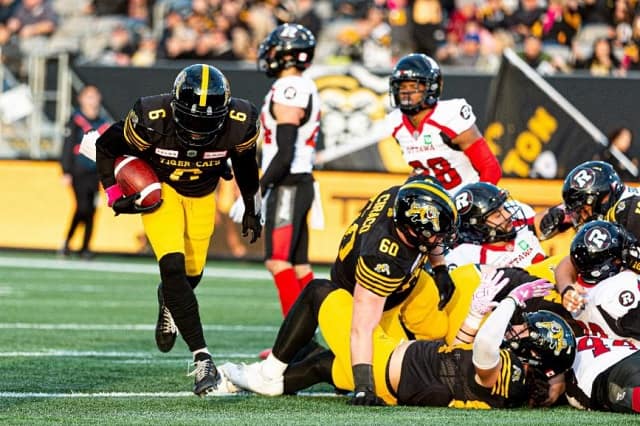 Quarterback David Watford is back with the Hamilton Tiger-Cats, who have also added offensive lineman Travis Vornkahl.

Both American players have been added to the suspended list while they complete their quarantine periods, the Canadian Football League team announced.

The Tiger-Cats (0-2) are on the road this week for their first divisional game, visiting the Montreal Alouettes (1-1) on Friday. Hamilton is the only CFL team that has yet to earn a victory.

Watford, 28, appeared in 12 games with the Tiger-Cats in 2019, registering five completions on eight attempts for 74 passing yards. He had 16 rushes for 40 yards and was tied for sixth in the CFL with a team-high six rushing touchdowns. The six-foot-two, 215-pound native of Hampton, Va., also suited up in both of Hamilton’s playoff games, including the 107th Grey Cup in Calgary.

Watford has appeared in 30 career CFL games with the Saskatchewan Roughriders (2018) and Tiger-Cats (2019), completing 20-of-40 pass attempts for 242 yards, one touchdown and two interceptions.

Vornkahl, 25, spent time on the Tiger-Cats offseason roster earlier this year prior to the start of training camp. He attended training camp with Saskatchewan in 2019 before NFL stints with the Cleveland Browns (2019), Washington Football Team (2019) and Indianapolis Colts (2019-20).

The six-foot-six, 298-pound native of Sealy, Texas played 32 games at both guard and tackle for West Texas A&M University over three seasons (2016-18). He earned all-conference recognition in all three seasons at the NCAA Division II program.