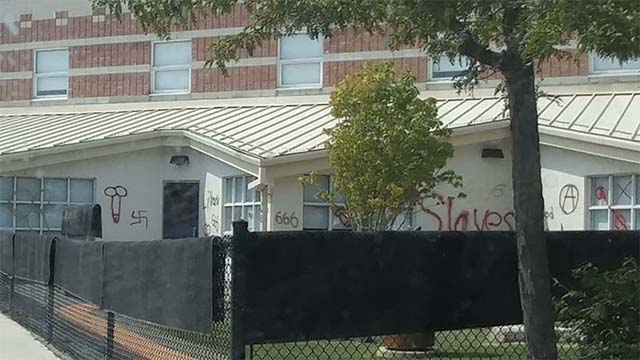 Three teens are facing charges in connection with a hate-motivated crime in Mississauga.

A Twitter user named Danielle Davidson reported the graffiti to both police and the City of Mississauga.

Sad day for my kids elementary school. This should be investigated as a hate crime, not just some juveniles having fun. Swastikas, 666’s, vulgarity and honestly disturbing things written all over the KINDERGARTEN yard pic.twitter.com/ExaWn8wndP

Davidson wrote that the graffiti included images of swastikas.

They accused teens have been charged with mischief over $5000.

All three suspects were released and will appear in court in September.

“Community safety is our number one priority. The Region of Peel is one of the most diverse and inclusive communities in Canada and hate motivated crime or incidents will not be tolerated,” said Chief Jennifer Evans.