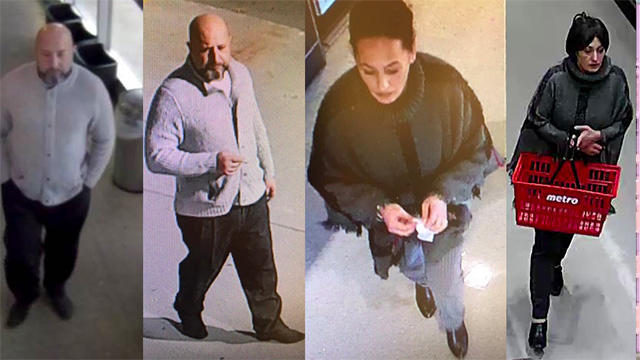 Three Mississauga residents are facing charges in connection with a series of “despicable” purse thefts – allegedly targeting seniors – at grocery stores in Oakville and Burlington.

At least 16 reports have been made since early last month, say Halton police, adding senior citizens were targeted and had their purses and/or wallets were stolen from their shopping carts while they weren’t looking.

Two arrests were made on Dec. 16 — both in Mississauga.

A third suspect was arrested Dec. 17 when investigators executed a search warrant at an apartment on Hurontario St. in Mississauga.

Loss prevention officers helped identify the suspects, whose images were released by police.

Investigators say the relationship they have with local loss prevention officers (LPO’s) has “proven to be invaluable and this is just one example. We are committed to continuing to work with LPO’s to identify and apprehend offenders, which thieves should take note of before deciding to steal in Halton Region,” said Hansen.

While the victim left her buggy unattended for a short time, the female suspect stole the victim’s wallet while her male counterpart appeared to be acting as a look-out, investigators allege.

This time, the suspects stole the victim’s purse – while she left her shopping cart unattended – and the suspects quickly fled the store.

Burlington shoppers were targeted next on Nov. 27.

The suspects stole the victim’s purse while she grabbed a carton of milk in Food Basics at 3365 Fairview St.

Once again, the suspects fled the store immediately after the theft, say police.

Barbara Grabowska, 45, of Mississauga, is facing nine counts of theft under $5.000.

Mariusz Zelinski, 44, of Mississauga is facing five counts of theft under $5.000 and one count of obstruct peace officer

Beata Parczewska, 37, of Mississauga is  facing three counts of theft under $5.000.

Anyone with information regarding this incident is asked to contact Detective Constable Derek Gray of the 3 District criminal investigations bureau at 905-825-4747 ext. 2344.

Police are reminding residents to keep a close eye on their purses and wallets.

Residents should be aware of their surroundings and be alert for distraction type thefts when shopping in the grocery stores, malls and other retail business.

Residents are reminded to only carry the necessary identification such as a driver’s licence or health card, and should try to minimize this potential loss by leaving their SIN card, birth certificate and passports securely at home.

If you become a victim of a purse or wallet theft, here’s what to do: Contact your bank, cancel your cards, and then call  police to file a report.