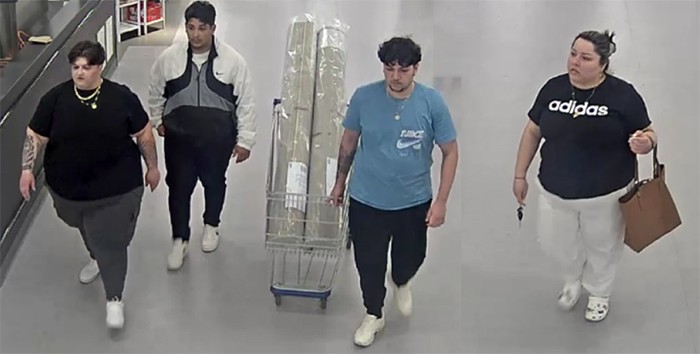 Halton Regional Police are hoping the public can help them identify four suspects who stole items from a Burlington Ikea store earlier this month. HRPS PHOTO

Halton Regional police are asking for the public’s help in identifying four suspects who stole items from a well known Burlington furniture store.

On May 16, three females and male walked into Ikea, located at 1065 Plains Road East, and loaded their cart with two rugs, a set of duvet covers and other concealed unknown smaller items within these.

The four paid $1.76, but had approximately $600 of known stolen items when they left the store.

The four suspects are described as:

Suspect 1: Is a female in her early 30’s with a heavy build and dark brown or black hair. She was wearing a black Adidas shirt with white writing, white track pants and white crocs.

Suspect 2: Is a male in his early to mid 20’s with a medium build, black hair and a minimal mustache/beard. He was wearing a grey, black and white Nike jacket, black pants and white shoes.

Suspect 3: Is a male in his early to mid 20’s with minimal facial hair and dark brown hair. He was wearing a blue Nike shirt, black pants and white shoes. Suspect was also wearing necklaces and has a tattoo on his right forearm.

Suspect 4: Is a male with a heavy build. He was wearing grey pants, black shirt and white shoes. Suspect was also wearing gold necklaces and has tattoos on both forearms.

Anyone with information on this case can contact Halton Regional Police Service at 905-825-4747.