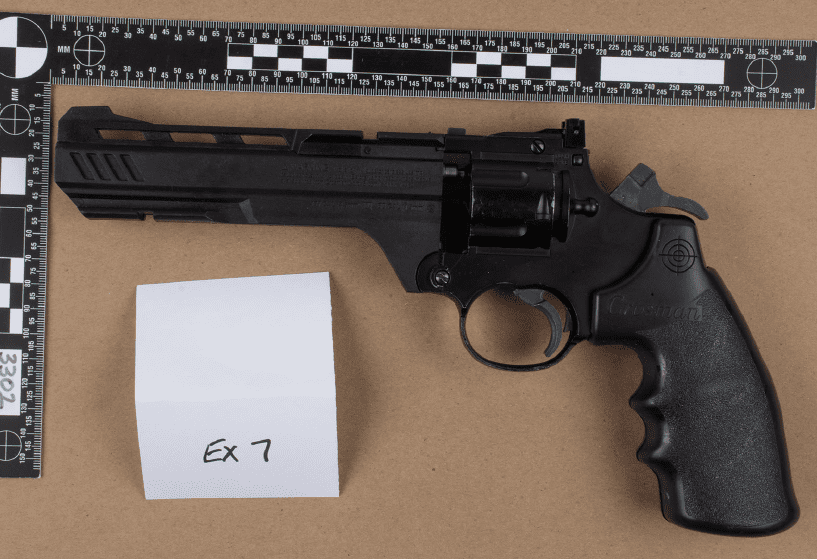 Police recovered this imitation firearm after a months-long investigation into a string of robberies across the Region of Peel. (Photo courtesy of the Peel Regional Police)

Three teens from Brampton are facing dozens of charges after a string of armed robberies, and police say there are more suspects at large.

Between August and December, police say there were nine robberies at various retail locations across the Region of Peel, including pharmacies.

Police say the suspects demanded cash, prescription pills, cologne, perfume, and cigarettes during the holdups, and knives were used to intimidate the victims in several of the robberies.

The suspects also allegedly used stolen vehicles during the robberies.

While no victims were injured in the incidents, police say a 58-year-old man in Brampton was carjacked at gunpoint on Dec. 15 in the area of Kings Cross Rd. and Clark Blvd.

Police said the driver was in the area to provide transportation services to a potential customer when three suspects – two male and one female – entered the vehicle and were driven to the area of Fleetwood Cres. in Brampton.

When they reached the destination, police say one of the suspects pointed a firearm at the victim’s neck and demanded the keys to the vehicle.

The victim reportedly handed the keys over and the suspects fled in the vehicle.

After months of investigation and a conduction search of a Brampton residence, police have charged three teens in connection to the crime spree.

Camryn Douglas, 18, of Brampton has been charged with:

Meghan Vargo, 18, of Brampton has been charged with:

A 17-year-old youth from Brampton who cannot be named under the Youth Criminal Justice Act has been charged with:

The accused were held pending a bail hearing and attended the Ontario Court of Justice in Brampton on Thursday.

Police say there are still multiple suspects remain outstanding and anyone with information regarding these incidents is asked to contact investigators from the Central Robbery Bureau at 905-453-2121 extension 3410. Information may also be left anonymously by calling Crime Stoppers at 1-800-222-TIPS (8477) or by visiting www.peelcrimestoppers.ca