Hamilton is a sports town, even if it is not part of the ‘big four’ North American leagues or Major League Soccer, the NWSL, PHF or WNBA.

Quarterback Dane Evans seems to be saying “peace out” to Hamilton and the Tiger-Cats.

On his Instagram story, the 29-year-old passer whose 2022 season teemed with trials and tribulations shared a video clip of two U-Hauls and two vehicles packed and ready for departure on Saturday morning. The video was captained with a peace sign emoji and a Hamilton location tag, leaving supporters of the team to read into it whatever they will. Evans’ bio also now says, “Pro QB #9,” without mentioning the Tiger-Cats. 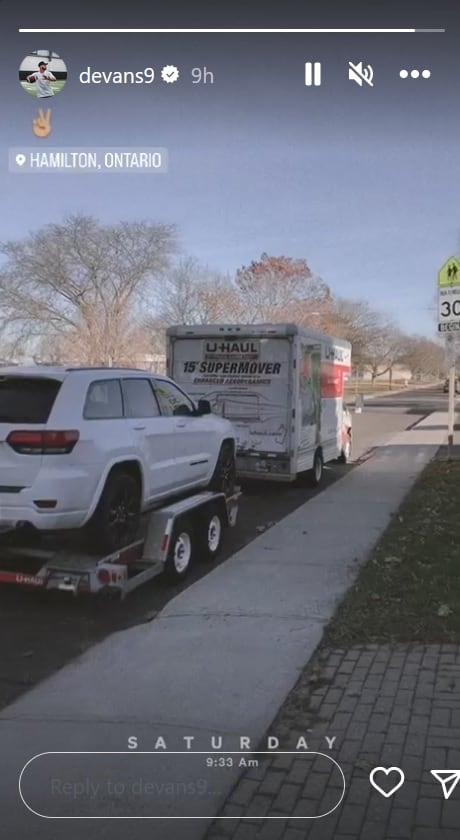 The Ticats, coming off a losing season and a first-round playoff defeat, traded for the negotiating rights to two-time Most Outstanding Player-winning QB Bo Levi Mitchell. That gives Hamilton a chance to sign Mitchell before he can become a free agent on Feb. 15. It also creates questions about the future Evans, who is due to earn $455,000 in 2023, has in Hamilton.

The quarterback always gets too much credit for success and too much blame for defeats. The Tiger-Cats committed to Evans as QB1 after he was central to their runs to 2019 and ’21 Grey Cup berths, after Jeremiah Masoli (who is now with the Ottawa Redblacks) opened the season as a starter.

Evans had a rotating group of blockers, rushers and depth receivers beyond 1,000-yard men Tim White and Steven Dunbar Jr. over the first half of the season. Tallying a league-most 16 interceptions left him with the 10th-best passer rating in the nine-team CFL (among QBs with at least 100 attempts), and he was also charged with more fumbles than any other quarterback. He was also replaced by backup Matt Shiltz during the East semifinal playoff defeat against the Montréal Alouettes on Nov. 6.

Shai Gilgeous-Alexander, of Hamilton, is the third-leading scorer in the NBA, averaging 31.1 points for the Oklahoma City Thunder. His "ho-hum 32-point night" last Saturday — as The Daily Oklahoman termed it — made the UPLAY Canada alumnus the second-fastest Canadian to 5,000 career points. Gilgeous-Alexander, monikered SGA, did so in 262 games. Andrew Wiggins did so in 246. Only five other Canadians have reached that mark.

Gilgeous-Alexander has had only four games this season where he has scored fewer than 30 points. He ranks sixth in the league in PER (player efficiency rating), according to Basketball-Reference.

The Cathedral Gaels are golden again

Call it a Daly double for the Cathedral Gaels, who have run the table to win back-to-back Ontario AAA girls basketball gold medals.

It took a team effort for Cathedral to complete the feat of going undefeated two seasons in a row. The combined 48 points from twins Keira Daly and Nicole Daly, whose father Kevin Daly is the Gaels’ coach, went a long way toward defeating the hometown Windsor-Holy Names Knights 85-73 in the Ontario final in Belle River, Ont., on Saturday. With the win, the Gaels are 51-0 over the last two seasons.

The Gaels of November had to weather the early storm from Holy Names, which swished 16 three-pointers. Keira Daly scored 26 of her game-high 35 points during the first half, and Kylie Rosos (15 points), Maya Flynn (14) and Nicole Daly (13) chipped in consistently to stretch a five-point halftime to 20 by three-quarter time. Amy Varasso also contributed eight points.

The Daly twins and their teammate-cousin, Rachel Daly, are in Grade 11 and still have another season of high school hoops. Their grandfather, Jim Daly, has also helped with the coaching. Suffice to say, #runitback2023 was one of the hashtags that the Gaels proudly included in a post about the win.

It is the ninth time in 11 seasons that a Hamilton team has won the Ontario Federation of School Athletic Associations (OFSAA) AAA girls basketball banner. Prior to the pandemic pause in 2020-21, the St. Thomas More Knights won in 2019 and the Westdale Warriors won in ’18.

The St. Mary Crusaders also won six titles in a row from 2010 to ’15. The first came in the since-discontinued quad-A division, before they ran off a five-peat in AAA.

The Mohawk Mountaineers, and lead guard Daniel Graham, finish the fall schedule with a top-of-the-table tilt against the Sheridan Bruins on Thursday (women’s game 6 p.m., followed by the men’s matchup).

Jorian Donovan scored as many goals on Sunday as he did in his entire rookie season with the Hamilton Bulldogs, scoring thrice during a 10-6 scorefest against the Sault Ste. Marie Greyhounds.

It was the first hat trick by the 18-year-old defenceman over 95 career games in a season-plus with Hamilton, but it’s hardly out of place with the progress Donovan is making in his second go-round in the Ontario Hockey League. The heavy graduations that the Bulldogs had after their OHL championship season has created opportunity to get involved in the offence, and Donovan’s current eight-game point streak has put him among the OHL’s top defenceman scorers with 17 points in 18 games. The Ottawa Senators draft choice is also third in scoring on the Bulldogs.

The @Senators prospect scored three in a high-scoring affair in Hamilton part of a 10-6 @BulldogsOHL victory! 🎥 pic.twitter.com/u63eZqPMX6

The big picture for Hamilton, which is seventh in the Eastern Conference after 20 games, is likely not as bright as it was while the 2021-22 Bulldogs. However, part of the draw of the OHL is seeing teenage players develop individually. As a 2004-birthdate player, Donovan was in the cohort that had to wait a season to jump to the OHL due to COVID-19 health protections icing the 2020-21 season, which possibly adds an extra degree of difficulty to the quest to go to the next level of pro hockey.

The Ticats were a Jeopardy! clue

Segueing to the home of the Daily Double, the Tiger-Cats and their stadium were incorporated into a clue on the long-running game show Jeopardy!

The $600 clue in the “Let’s Play Sports There” category stated, “Home of Alex Trebek’s beloved CFL Hamilton Tiger-Cats, the field named for this donut company hosted a 2022 NHL outdoor game.” The contestant knew the question: “What is Tim Hortons?”

The late Trebek’s rooting interest in the Tiger-Cats was apparently confirmed eight years ago on the June 3, 2014 episode. Hamilton offensive lineman Peter Dyakowski was a contestant. Trebek mentioned that to Dyakowski during the out-of-the-commercial-break banter session with the contestants.

It is not the first time that a Hamilton sports stadium has been referenced on a popular U.S. series. The former Ivor Wynne Stadium — “in a Hamilton, just outside of Guelph” was mentioned — by a character played by Dundas native Dave Thomas — in a 2013 episode of the comedy How I Met Your Mother.

Old footage of Copps Coliseum (now FirstOntario Centre) also appeared in the “ESPN Classic” sketches on Saturday Night Live ca. 2009-10. The arena appeared as an establishing shot in a string of sketches featuring future Ted Lasso star Jason Sudeikis and Will Forte as tuxedoed commentators from a 1980s or ’90s ESPN presentation of an obscure women’s sports event. Kristen Wiig always played a competitor whose always had the same last name as a major North American city.

(“This weekend in Hamilton sports” appears on many Mondays throughout busier times in the sports schedule. There is a lot happening, and no doubt something gets missed. Feedback may be sent to [email protected].)