This weekend in Hamilton sports: McMaster runs off with national title, Bulldog scores an A. Hayes-ing goal 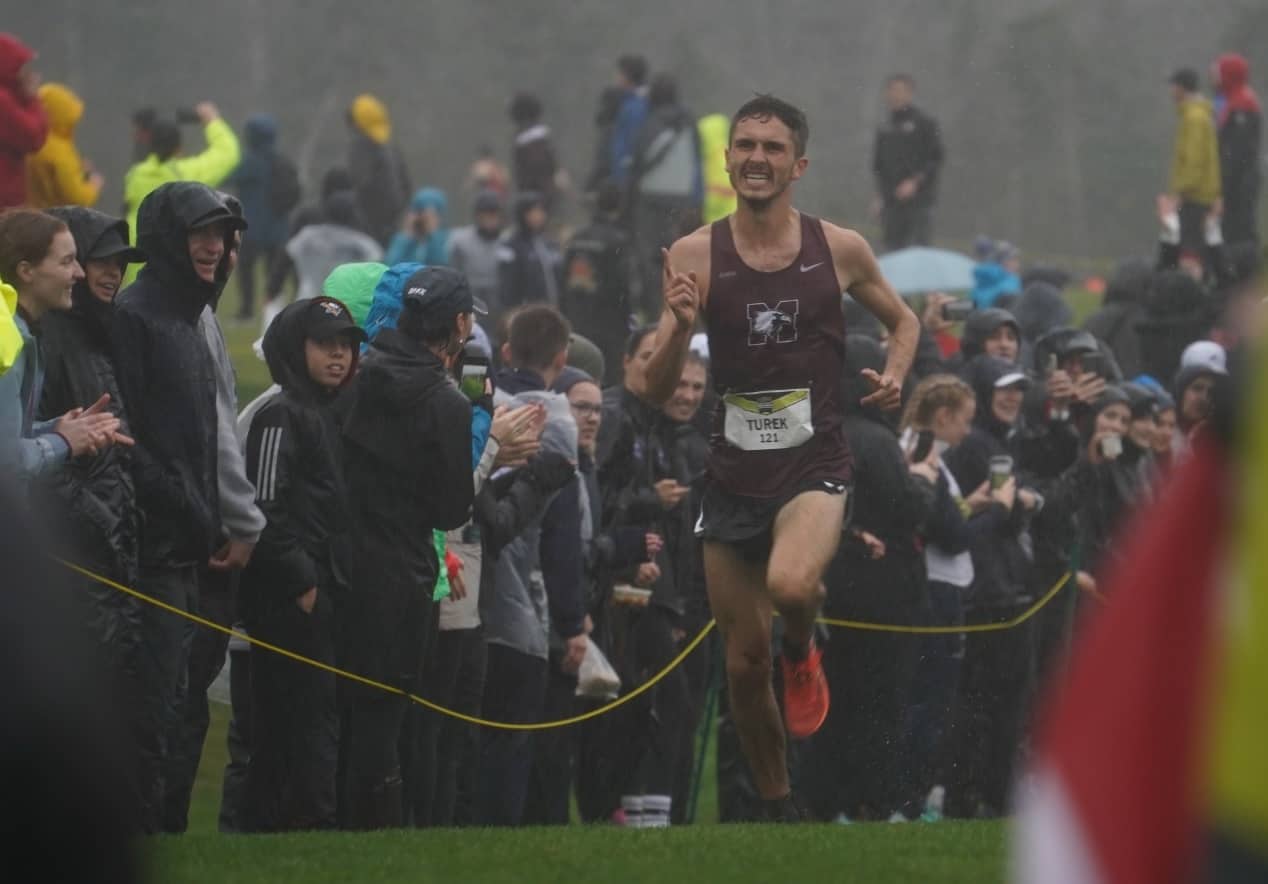 Hamilton is a sports town, even if it is not part of the ‘big four’ North American leagues, Major League Soccer, or the NWSL, PHF or WNBA.

Starting this Monday, and most Mondays during the peak of the sports schedule, inthehammer will shoot its shot with a Monday-morning sports wrap.

Here is what went down as it pertains to Hammertowne and local teams and sportspeople last weekend.

Turek (pictured, top) and fellow seniors aced their final exam, their last race together on Saturday, to bring McMaster its first U Sports men’s cross-country title in 59 years. Illustrating how cross-country runners might well be the heartiest souls in U Sports — they race in a singlet and shorts in nasty mid-November weather, after all — Mac’s top five runners all placed in the top 16 to secure a gold.

On a rainy, muddy morning at The Links at Brunello golf course in Halifax, Turek covered the 8-km race in 24 minutes 21 seconds. The Whitby native, who is a mechatronics engineering and management student, also earned national Athlete of the Year honours.

“This has been five years in the making for us,” stated Schnurr, the two-time Olympian who was named both U Sports and OUA coach of the year. “They worked really hard and I’m really thrilled for our men. This is the last season for our top five runners, so it’s a really good way for them to finish their university careers.”

The women’s cross-country Marauders finished seventh as a team, with Rosalyn Barrett placing 30th. The women’s race was run after the men had been on their four-lap tear through the 2-km course. In the mud, Barrett ran 3-or-4 laps with one of her shoes off. Hamilton natives Kaitlyn Treleaven and Emma Waddington were also point-scorers for the Marauders.

THE NATIONAL CHAMPS ARE BACK! 🏆👟🥇

The Marauders secure the national title and U SPORTS banner for the first time in 59 years! 👀

Neither Grey Cup rooting option — the hated Toronto Argonauts, or Zach Collaros leading a Winnipeg three-peat? — seems great for Hamilton fans. The matchup has plenty of Hamilton connections, though.

The Blue Bombers boast one ex-Tiger-Cats quarterback behind centre in Collaros — pending a clean bill of health after he left the West final on Sunday — and another in the front office. Danny McManus is the assistant general manager.

Blue Bombers’ franchise QB Zach Collaros tried to come back into the West Final but could not do it.

Winnipeg head coach Mike O’Shea and GM Kyle Walters wore the black-and-gold in their playing days. Fellow Blue Bombers assistant GM Ted Goveia was also an assistant coach at McMaster when it was an OUA powerhouse in the early 2000s.

On the field, Alden Darby Jr. chipped in a late fourth-quarter sack on Sunday when Winnipeg defeated the B.C. Lions 28-20 in the West final. The Tiger-Cats moved Darby to Winnipeg at the CFL trade deadline

On the 4½-point underdog Argonauts, former Ticats star Brandon (Speedy B) Banks has another chance to finally win a Grey Cup.
The veteran receiver was part of the Hamilton teams that lost Grey Cup games in 2013, ’14, ’19 and ’21 before moving down the QEW as a free-agent signing in February.

The Argos have two McMaster alumni. Sixth-year fullback Declan Cross will be seeking his second Grey Cup victory. Cross was the Marauders’ offensive MVP in 2014, the last time Mac played in the Vanier Cup. Another ex-Marauder, Tommy Nield, is one of Toronto’s reserve wide receivers.

The fifth-year guard heated up early, shooting an effective 79.6 per cent on 18-of-27 with seven triples while fighting through physical York Lions defending. Gates is leading OUA with 30.8 points per game for the Marauders (4-5, 1-3 OUA).

Mac has one basketball homestand left before OUA’s exam break. The Marauders teams have the TMU Bold (defending women’s national champions) in on Friday. The Brock Badgers (defending OUA Wilson Cup men’s champions) pop in on Saturday. Both doubleheaders tip at 6 p.m. at Burridge Gym.

A. Hayes of brilliance

Hockey has “the Michigan.” Then there is the no-move deke, a brilliant breakaway manoeuvre that Bulldogs wing Avery Hayes pulled off on Saturday.

On a mid-second period penalty kill, Hayes won a puck race for a breakaway. Bearing in on Mississauga Steelheads goalie Alessio Beglieri, Hayes pulled his stick away from the puck and it whipped through the five-hole for a highlight-reel shorthanded goal.

The 20-year-old Hayes is fourth in OHL goal scoring with 12 among his 16 points through 15 games. He has also made a specialty out of the shorty, since nine of his career 89 goals for Hamilton have come during penalty kills.

Last season, then-Bulldogs wing George Diaco pulled off “The Michigan” during a game in Hamilton. Oddly enough, both that tally and Hayes’ on Saturday came while the game was tied 1-1.

The Bulldogs (.433 point pct.) are taking a two-win streak into a span of a five home games in a row that begins with a school day game against the Barrie Colts on Wednesday. Hamilton sits eighth in the Eastern Conference after winning the OHL title last season, so the next run of results might dictate how the club would approach the trade deadline in January.

The Vanier Cup contender with the most favourable setup in U Sports’ final four has Hamilton ties. The No. 1-ranked Western Mustangs, however, are also a long-standing rivalry with McMaster.

The Mustangs have grads of St. Thomas More in Hamilton calling signals on each side of the ball, with quarterback Evan Hillock and middle linebacker Riley MacLeod. Hillock’s favourite receiver, all-Canadian Savaughan Magnaye-Jones, also played at STM. Hillock passed for three touchdowns, including a 57-yard opening score to Magnaye-Jones, during Western’s 44-16 win against the Queen’s Gaels in the Yates Cup (Ontario championship) last Saturday.

Western now hosts the No. 2 Laval Rouge et Or in the Mitchell Bowl national semifinal on Saturday (3:07 p.m. ET, cbcsports.ca). It will be the two powerhouses’ fifth postseason meeting in 14 years, but the first to be held in London. And, of course, the winner will play in the Vanier Cup on the same field on Nov. 26.

The U Sports football semis begin with the No. 6 St. Francis Xavier X-Men hosting the No. 4 Saskatchewan Huskies in the Uteck Bowl in Antigonish, N.S. (12:07 p.m. ET, cbcsports.ca).

Any soft-spot sentiment for St. FX should be tempered by awareness of Atlantic University Sport teams’ recent run at this stage. The Atlantic reps have lost 13 semifinal games in a row, with an average margin of defeat of 46.3 points since 2015.

Regionalism and a rotating schedule determines the matchups in U Sports. That is why the No. 1 and No. 2 teams are playing this week, while No. 6 hosts No. 4.

(“This weekend in Hamilton sports” will appear on many Mondays throughout busier times in the sports schedule. There is a lot happening, and no doubt something gets missed. Feedback may be sent to [email protected]