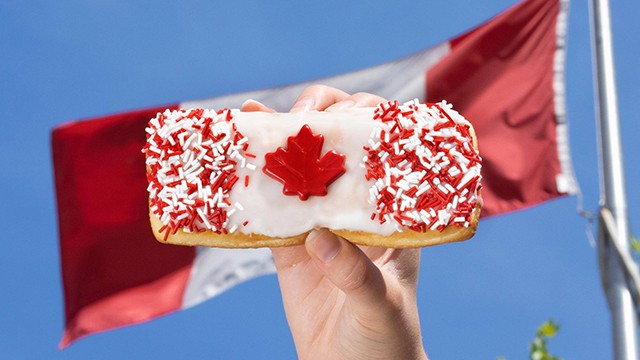 What do you normally get when you go to Tim Hortons?

Canada’s most iconic coffee chain just released the items Canadians purchased most throughout 2020, and you probably won’t be surprised at the top two items.

When it came to beverages, the most-often purchased item was, unsurprisingly, a double-double, while the most-sought donut was the Boston Cream.

On the east coast, Boston Cream reigned supreme—it was the most-purchased donut for the Atlantic provinces, and the second-most purchased donut in Ontario, Quebec, and Western Canada.

“It’s a filled, soft, yeast donut and has delicious chocolate and creamy vanilla flavours. The concept for the donut comes from a Boston Cream Pie recipe that’s over 100 years old—it’s so cool to me to see how dishes evolve over time,” Tallis Voakes, Culinary Lead for Tim Hortons in charge of overseeing quality improvement across the menu in 2021, said in a news release.

In Quebec, though, the honour of most-purchased donut belonged to the Honey Cruller, while both Ontario and Western Canada prefer the Apple Fritter.

When it came to beverages, it appeared all Canadians agreed Tims’ best was the double-double, while the second choice for Canadians was the “regular”—one dairy and one sugar—followed by a simple black coffee in third.

Nationwide, the most popular donuts among Canadians were the Chocolate Dip in fifth, the Honey Cruller in fourth, the Old Fashioned Plain in third, the Apple Fritter in second, and the Boston Cream in first.

In Ontario, the five-most popular donuts were the Honey Cruller in fifth, the Chocolate Dip in fourth, the Old Fashioned Plain in third, the Boston Cream in second, and the Apple Fritter in first.