The Trash Walking Mom That Picks Up Your Litter in Mississauga 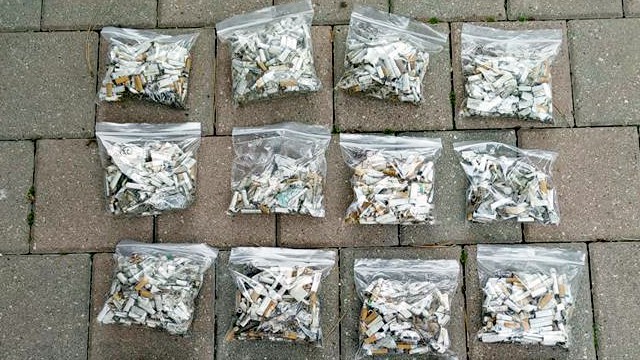 Not all heroes wear capes, as the old saying goes.

In fact, one of the most noble, heroic things you can do is pick up trash that’s just lying on the ground.

Cindy Wilding is a Mississauga mom who does exactly that, in an effort to keep her community looking clean and beautiful.

Wilding, who has lived in Port Credit for 12 years, first realized how much litter there was about three years ago.

“I was walking my son to school and spotted broken glass all over a sidewalk,” she said. “I was worried that a young child or a dog would be injured, so after dropping my son off, I returned with a pair of gloves and picked it up.”

After that she began noticing litter more and more, and got into the habit of picking it up.

“I didn’t want to be the kind of person who just complains about everything, yet does nothing to create change,” she said.

Prior to realizing how much trash there was outside, Wilding said two important things happened to her.

The first was that she read a book titled “Me to We: Finding Meaning in a Material World,” written by Craig and Marc Kielburger. She said the book changed her way of thinking about her place in the world, as well as her need and ability to affect change.

The second thing: Seven years ago, against the odds, she survived a raptured brain aneurysm.

“I guess that brush with death sort of kicked me in the butt in a lot of ways, and made me understand that time waits for no one, and that I had better get moving and become a better contributor to the world.”

She slowly began to involve herself with more and more causes she felt strongly about – including picking up litter, of course.

Now Wilding has “dedicated trash walks”. For about an hour, she’ll go out specifically to find and pick up garbage from the ground. Most weeks, she does a minimum of two trash walks.

“It’s amazing how much I will pick up in an hour.  I have a couple of spots that I know are regularly littered, so I have sort of unofficially ‘adopted’ these places as my responsibility,” she said. “I confine myself to the Port Credit area, because that is where I live, but I know that all of Mississauga could use the help.”

However, her trash walks aren’t the only times she’s picking up litter. She makes sure to pick up at least three pieces of trash daily as part of her regular day. For example, if she’s heading to the store and she sees litter on the way, she’ll dispose of it.

“I try to get this message across that if everyone made it their habit to pick up three pieces a day… what a difference it would make,” Wilding said.  “It’s just math, really.”

Wilding currently has a large social media presence – not only does she run a WordPress blog detailing her trash walking and general thoughts, she’s also built a community on Facebook called Trash Walking Moms.

She learned that running a successful Facebook page takes time and care, as well as creating regular content for it by providing visual documentation of the litter in her neighbourhood. In doing so, she said she “developed a deeper understanding of the wasteful, disposable nature of our culture.”

“I’ve come to a point where I’m not just concerned about litter on the streets, but to a shift in my way of thinking about my choices as a consumer.  I have made some small changes in my purchasing and in my habits in order to try to reduce my use of disposable plastic.”

She believes there are three important things that anyone can easily start doing: bring a reusable coffee cup, water bottle, and grocery bag with you when you go out. This makes it easier to refuse single-use items that often become litter, such as plastic water bottles.

To those who feel inspired by Wilding’s actions and also want to dedicate time to cleaning their neighbourhood, she has this to say:

“Don’t worry about the weird looks you think you are getting from others as you pick up trash.  First, they probably aren’t really looking at you at all, and if they are, who cares?  If you are picking up litter, you are doing the right thing.”

She advises people not to do more than they’re comfortable with, and not to be overwhelmed by the litter they will always see.

“Sometimes I get a bit down about it all, and think ‘what’s the point?’  But when I do go out and trash walk, I know I have made a difference.  However small it may be in the larger picture, it is still doing something.  Which is always better than doing nothing.

“Picking up trash is easy to do, it requires no special permit, and no high tech gear, no great investment. A pair of gloves, maybe a “picker” and a receptacle for what you gather is all you need to get going.  It’s good exercise, and it gets you out in to nature if you go to a park to do a cleanup,” she said. “Just do it, and you’ll feel good, you really will!”

To support Wilding and stay up to date on her trash-cleaning experiences, check out her blog and her Facebook page.