The Straddle Bus: An Alternative to LRT in Mississauga? 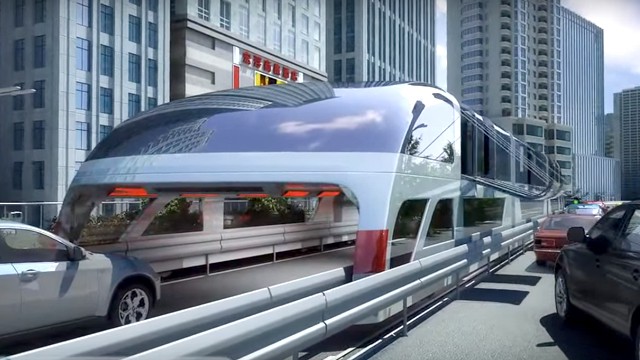 The Hurontario-Main LRT is scheduled to begin construction in 2018, slated to finish by 2022. Of course there are inevitable questions about potential cost overruns and construction issues, but those I believe would not even be the main issues.

During construction, it has been mentioned several times — by city officials and elected ones — that there will be inevitable interruption of the normal usage of Hurontario as they convert one lane of traffic to accommodate the LRT vehicle.

There is construction work being done on Hurontario right now, and trust me it’s very disruptive for the average driver. They’ve narrowed Hurontario to two lanes starting around Fairview, and gradually to one lane until Burnhamthorpe Road, so I’m getting a taste of what it will be like when lanes are taken away permanently.

I am still convinced the LRT is the best option for Mississauga in terms of moving people around within the city, but there are always alternates to improve upon existing infrastructure.

When I saw this, I was really intrigued. It solves the issue of sharing space with vehicles on the road, is innovative, and actually looks quite fun to ride. This idea was conceived sometime around 2013 and was proposed to be installed in some Chinese cities and could soon be coming to the United States.

Basically, the vehicle would straddle the road, hence the name, and it has a hollowed out area where automobiles can pass through without interrupting the operations of the bus as it picks up and drops off passengers. Also, it’s 85% cheaper than paying for a subway, which someone on this publication also proposed around the same time last year.

If we adopted this plan instead of the LRT, what would the construction procedure look like? If we picked this Land Airbus idea, most construction could conceivably only be on the side of the road as infrastructure gets installed for the side wheels, because there would be little or no need to put anything on the road itself. At full capacity, the Land Airbus can fit around 300 people.

I’m not saying change the current plans that are on the books, but looking at long term strategies is part of the human experience and trying to make things better is what society should always be striving for. It’s an intriguing idea worth exploring. It seems more realistic than the constant demand for subways, and it’s doable with the current technologies and engineering expertise we have in Canada.