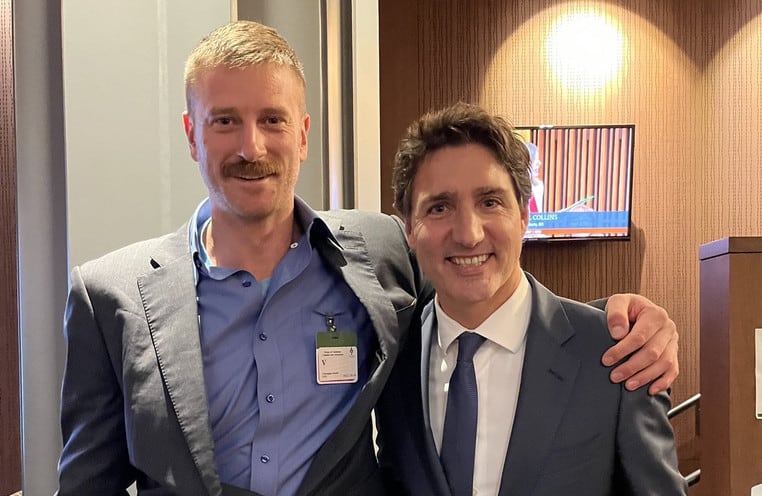 Canadians for Nuclear Energy president Chris Keefer, whose organization can rightly take much of the credit for saving the Pickering Nuclear Generating Station from the chop, blitzed Parliament Hill Wednesday with a message for the federal government to “centre” nuclear energy in future international energy deals.

Keefer had a chat with Prime Minister Justin Trudeau and was able to bend the ear of several cabinet ministers before holding a press conference with a couple of dozen MPs from both sides of the House in attendance.

He cited Romania, which has two CANDU nuclear reactors that are finished “and two that should be finished” and has received overtures from the U.S. to finance the upgrades using Canadian technology.

“This is a no-brainer,” he said. “Canada has to be involved and has to invest in order to maximize Canadian content.”

Romania is not the only European nation looking for help from Canadian nuclear technology, Keefer noted, naming Ukraine as a country where CANDU nuclear can “fill the gap” in the absence of the Russian market.

“Nuclear contributes so much here domestically … and our European allies are crying out for Canada to step in.”

In the United States nuclear and other clean energy projects taking over coal-powered sites have their environmental assessments and other measures fast-tracked. “That’s the kind of bold thinking we need here,” Keefer said, adding it takes 7-9 years to green-light a nuclear site in Canada.

(It’s also worth noting that while Canada is the world’s second-largest producer of uranium – the fuel source needed for nuclear reactors – American nuclear technology requires uranium made commercially by just one supplier in Russia, which is persona non grata on the world stage right now.)

Keefer also called on Ottawa to end its “contradictory approach” to nuclear energy financing in the Green Bond framework, where nuclear is lumped in with alcohol, tobacco, tobacco and gambling. “Bond funding is essential to funding, he said. “Candu is the gold standard for nuclear.”

Keefer relished the chance to bring his message to Ottawa. “It was great to chat with the Prime Minister about the need for the Government of Canada to end its contradictory approach to nuclear energy and embrace it as the proven solution for climate, clean air, medical isotopes and lastly energy security for our beleaguered European allies.”

Now it’s all about Canada continuing to spread the message about the benefits of nuclear energy, particularly Canadian CANDU technology, he added.

“Pickering was a litmus test for politicians worried about being boldly pro nuclear in their communications.”

Hard to believe that an advocate not directly paid for what he does, representing a group which operates on a few thousand dollars per year at best, has accomplished so much in a couple of years.

The secret is that the facts strongly support our position.#NuclearEnergy https://t.co/0UpvvqiUre