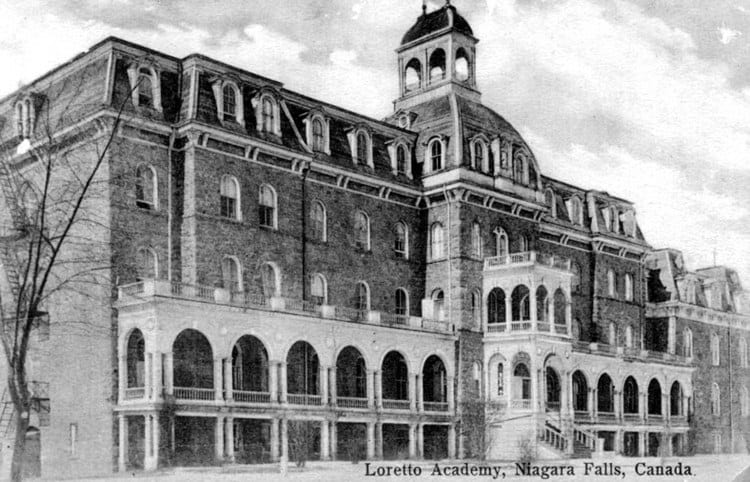 As majestic as it comes, the Loretta Academy, built in 1861 will soon become part of a massive three-tower development in downtown Niagara Falls.

A Niagara Falls building that was once a tavern in 1861 eventually turned into a convent and school run by nuns and will someday soon become the historical base of a massive new development.

The Loretto Academy had some colourful days in his history and through negotiation, the building’s facade will remain as part of a three-building complex that will soar into the Niagara skyrise.

Back to the beginning, however. In the 1820s, a wee Irish lad by the name of John Joseph Lynch saw a picture of the Horseshoe Falls and decided that it was a natural place for people to worship God.

Eventually, Lynch became a priest in Texas and worked his way up to the Archbishop of Toronto in 1860. It was in that position, he bought up six acres of land overlooking the Falls on the Canadian side in 1861, which he then deeded it to the Loretto nuns, an established order in Toronto.

One small catch: On this land was a tavern known as The Canada House. Like all good Catholics of yore, they instantly turned ‘sin’ into sanctuary by renovating and converting the tavern into a convent and school for the nuns.

The Loretto Academy opened in September of 1861, watched over by the first Mother Superior, a woman named Joachim Murray. This school attracted day students from Chippawa, Clifton, Drummondville, and Niagara Falls New York, and boarders from Toronto, Guelph, Buffalo, Rochester and Lockport.

The yearly tuition at Loretto was $80 to $100, a huge amount in those days. In 1869, a sturdy stone structure known as the North Wing was built and plans for a new main building were drawn up in 1879-1880. The new building was completed by the beginning of the 1900s, and was called the Loretto Convent of the Blessed Sacrament. 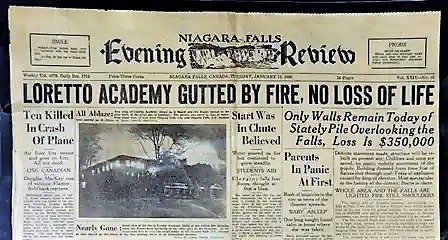 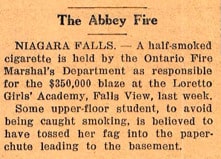 The local newpaper from January 1938 blamed the fire on a student throwing a lit cigarette into the garbage chute.

On January 19, 1938, a fire destroyed the interior of the South Wing. None of the sisters or boarders were injured and because all the walls were stone, the structural part of the building remained intact, allowing for reconstruction.

According to one historian at the Niagara Falls Public Library, “The evening of the fire was a typical one for Niagara, clear, cold and windy, with some snow on the ground. At 9 p.m., 65 children aged five to 17 and 40 nuns had just settled down in their beds for the night. Thankfully, the fire was discovered early and all residents were successfully alerted. All the children were wrapped in warm blankets and evacuated to safety.”

The reconstruction was completed by September of 1938, and the school reopened. While a headline above suggests there was $350,000 in damages – a king’s ransom at the time – it turns out it was have been far worse. The true damage might have been in the $650,000 range. 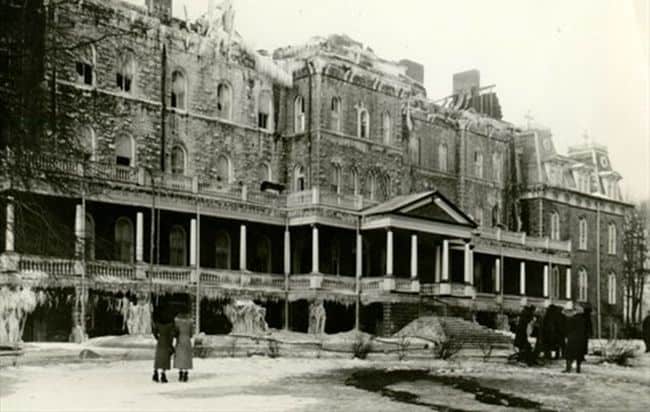 While the damage from the January 1938 fire looks bad, the building was restored
by that September.

The Loretto Academy went on to celebrate its 100th anniversary in 1961.

In 1970, the boarding school was closed and Loretto became the Catholic High School of Niagara Falls until 1982 when St. Paul High School was converted from a senior school. The building operated as The Loretto Convent and Christian Life Centre as a site for religious retreats for many students within the (Catholic) Separate Board until its closure in 2006.

So what now? As it turns out, the building remained vacant until the “Loretto Lands,” as they were known in Niagara Falls, were bought from from the Loretto Sisters, a Roman Catholic order of nuns, in 2006 by a land holding company.

That company, in turn, sold the 7.4 acres of land to a developer, 3Bridges, who will now, as part of their agreement with the city, incorporate the existing Loretto Academy building into the Falls-facing facade of the central tower.

Parts of the Loretto Academy will be cleaned up and incorporated into part of the three-tower complex, coming in the future to the “Loretto Lands” in downtown Niagara Falls.

So, in essence, to recap. The building began as a tavern in the 1850s. It then got turned into a convent and a school for young women, which then got hugely expanded and then, of course, nearly burned down. Then it became a high school and for a brief while, a convent again. Then it got shut down for good, remaining empty.

Now the facade of it will gain a second life as part of the hugest development to ever see downtown Niagara Falls. Got all that? It’s a lot of history with a peek into the future. In the meantime, here’s Niagara Falls Museum’s three-minute look back at the Loretto Academy.