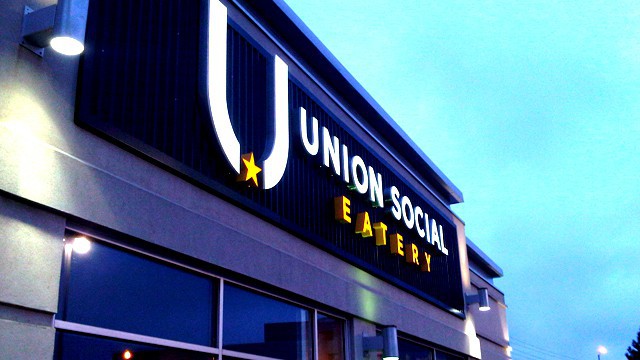 From what I’ve heard, the group of owners are a close-knit group of friends with ample amounts of industry experience working and running SIR Corp restaurants who decided to break free from the ball and chain of chain dining to start their own one-of-a-kind casual eatery.

Union Social Eatery feels like a higher end (than average) pub in an open concept style space, with the bar on centre stage, lined with large flat screen TV’s, a perfect spot to catch a game and have a pint. The lounge area is to the right and the dining area to the left.

Our waiter was very helpful and knowledgeable about what goes on in the back of the house, which caught my attention. I would have never expected a local casual eatery to house a chef who literally makes everything in-house, including their own signature sauces, in-house smoked wings, and something as simple as their own hand-cut Yukon fries. He further explained that the meat and fish were all fresh, nothing was frozen, and that the special of the night was a black cod filleted in-house. It was definitely my entree for the night. The menu is a mesh of global fare and includes something for everyone, with flavours that span from the Eastern to the Western hemisphere, and I love the creative menu sections such as Social Starters for the appetizers, Two Handers for their burgers and The Main Event for the entrees.

The starter of the night was from their Flatbread Heaven section of the menu called Symphony of Protein ($10.75) which includes smoked chicken, smoked bacon, shiitake mushrooms, and sausage with a fire roasted tomato sauce. You can’t really go wrong with a simple flatbread and it’s usually nothing to write home about, but I must say that this flatbread was really good. The combination of ingredients worked well together and the house made fire roasted tomato sauce was the hit, as it tied all the flavours in together. 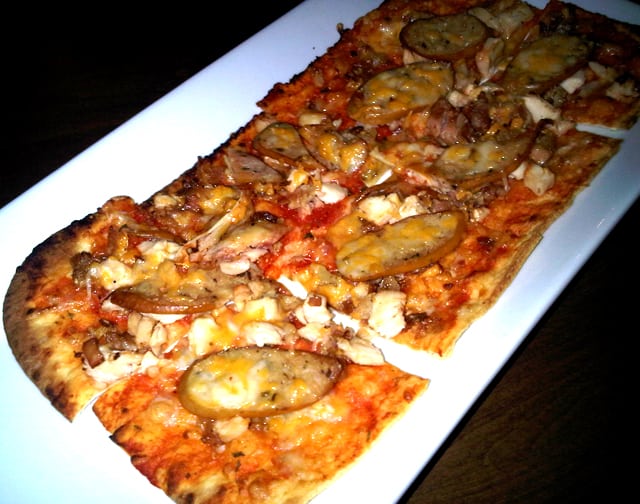 I opted for the special of the night instead of a dish on the Main Event. The special was an in-house filleted black cod in a miso sauce, garnished with a mango salsa and pea shoots, served with a barley mushroom risotto, and a mixture of asparagus and grape tomatoes ($21.95). I just had to try Executive Chef Michael Rame’s creation since it wouldn’t last too long on the menu. The dish was well presented, and all of the flavours worked extremely well together. The freshness of the mango balanced well with the miso flavoured cod, and the fresh veggies paired well with the hearty risotto. The only thing missing for me in this dish was more cheese in the risotto (I like it cheesy!), and less oil on the fish since it is a very fatty fish. Overall, I appreciate a well-created menu and specials and enjoyed this dish. 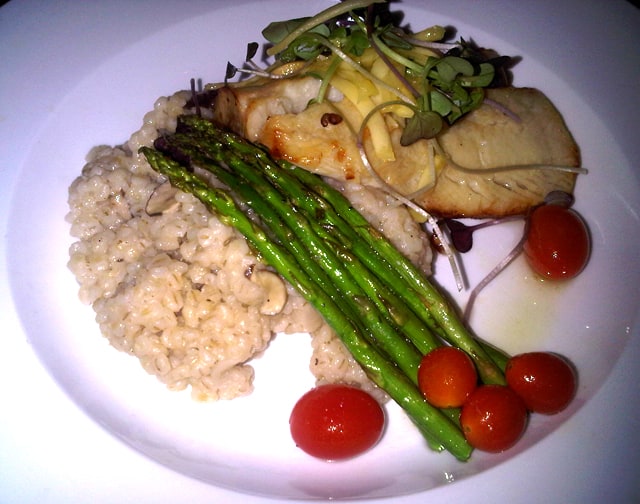 I also had a taste of The Epic Cheeseburger ($11.95) which is a homemade and hand-pressed sirloin and brisket topped with house smoked cheddar, havarti and provolone cheeses, served with their hand-cut Yukon fries. Most definitely an epic cheese smothered burger that nixed my fix for cheese. I have a feeling that this burger will rank in the top 5 list insauga for best burgers. 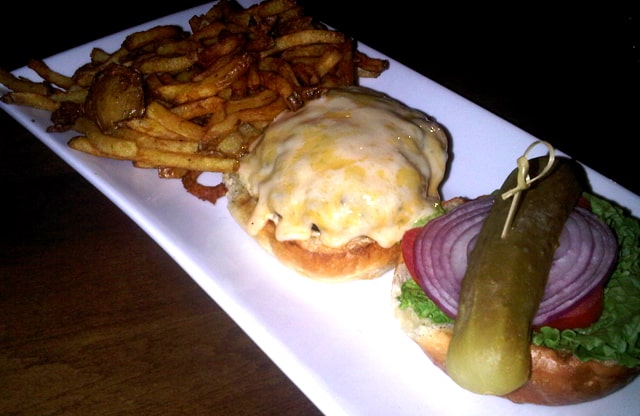 You can’t go wrong with their in-house made desserts, and at $4.95, it’s definitely a sweet treat to end the night; something I look forward to trying on my next dinner at Union Social.

The only negative was the decor and the overall ambiance. It felt as if they had not finished decorating despite having been open for a couple months now, or that they had hired an interior designer who is a newbie to the scene of restaurant designing, or even worse, that they did it themselves and didn’t hire a designer at all. I think that if they tie up a few loose ends like getting rid of the cables that run from the ceiling to the hostess station, paint the front entrance so it blends into the restaurant, get rid of the black and white photo mural of people on the side wall, and add some art work throughout the restaurant, it will help polish off the look nicely. In any case, I’m all about the food and that they brought to the table.

Union Social Eatery claims to have a well-crafted menu, using quality ingredients at reasonable prices, and in my opinion, they definitely delivered!