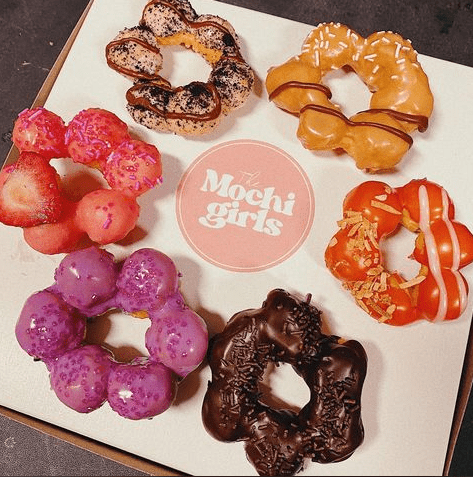 It may be half-a-year later than first expected, but @themochigirls are finally opening their downtown Oakville donut shop next week.

Insauga.com first wrote about the anticipated opening last April, but some unforeseen circumstances forced the delay.

Crispy and fresh with the chewiness of mochi on the inside, the bubble-ring shaped donuts became popular in Japan and are also known at “pon de ring.”

Mochi donuts have a deep-fried crust and a chewy texture on the inside. They are different from regular donuts in both texture and taste.

While regular donuts, made with all-purpose flower, are denser and bread-like, the texture of mochi donuts is chewy and light, making them much easier to eat.

Mochi is a type of rice cake made of short-grain glutinous rice, sugar, water, and cornstarch. After the rice is cooked, it’s pounded into a sticky paste and formed into different shapes.

The donuts are drizzled with all sorts of tasty flavours including peach, strawberry, raspberry, durian, mango, watermelon, chocolate strawberry, vanilla and much more.

The Mochi Girls have already developed a following thanks to their pop ups.