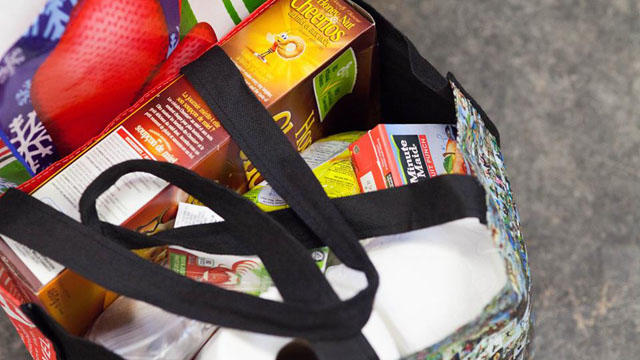 With Christmas just a few short days away, charitable giving is top of mind for many and it’s not unusual for families to start stockpiling canned foods for a generous food bank donation.

While all help is appreciated, food bank representatives from all over Canada would be just as happy–perhaps even more happy–with a monetary donation instead of a canned one.

“There have been great articles about [the issue] online, but we hesitate to put the word out on official channels because we don’t want to seem ungrateful,” says Meghan Nicholls, director of marketing and development with the Mississauga Food Bank. “Eighty per cent food we give out is donated.”

Nicholls is right that the Mississauga Food Bank isn’t putting out an official call for monetary donations. On its official website, the organization calls for canned protein (fish, meat, peanut butter and beans) and canned vegetables (along with pasta sauce and healthy soups and stews).

At this juncture, food banks are still encouraging donors to bring canned goods to their food drives and facilities because the donations do make their way into the kitchens of families in need. So while the organizations are not attempting to discourage food donors, some have come forward to say that they can do a lot more with cash rather than boxes upon boxes of canned cranberry jelly.

“If we got out of donated food business and got into the bought food business, if all those people spending money on donated food gave money instead, we wouldn’t require a 21,000 sq. ft. warehouse and piles of snack food and tens of thousands of hours of volunteer work,” Nicholls says.

While that might seem strange, it’s not. Sorting through piles of donations requires hours of work and thousands of square feet of space. It’s also true that a donor’s dollars don’t stretch quite as far. Case in point: the average consumer could spend approximately $3.99 on one jar of peanut butter, while the Mississauga Food Bank spends significantly less because it can purchase food at wholesale prices.

“We’d prefer to purchase ourselves,” says Nicholls. “We purchase from wholesale at sometimes less than wholesale prices and we’re able to buy exactly the items that are needed and don’t require the time and effort to sort. We can buy food for less and make sure that food gets out to people who need it. I would say volunteers spend 8,000-10,000 hours a year with us just sorting and inspecting food.”

Monetary donations are also preferable because they ensure the food bank can select the foods that will distributed to people in need. According to Nicholls, the Mississauga Food Bank doesn’t need leftover Halloween candy, discarded Christmas treats and packages of crackers and cookies–items that many benevolent and well-meaning donors believe will be a nice treat for food bank clients.

“People think it’ll be nice to give treats, but we don’t need cookies, candies or empty calories. We need fruits, vegetables, proteins and healthy grains. We want to feed people what we feed our families. We want to provide the healthiest food possible.”

To be fair to the average donor, it’s unrealistic to expect (and food banks understand this) people to drop off perishable items like dairy products and fresh vegetables. For that reason, the Mississauga Food Bank would prefer to receive resources that will allow it to purchase necessary items and distribute them accordingly.

[“If we had less donated food] we could spend more time managing fruits and vegetables and proteins,” she says. “In the warehouse, if we have more than we need, it takes up space. Twenty-five per cent of our warehouse fills up with [unneeded] items and it takes the rest of the year to distribute them. If we purchase food, it’ll go in and out right away. We won’t have to store things long-term.”

For many donors, there’s added comfort in offering a product rather than cash. Some residents fear money won’t make it people in need and therefore prefer to put an actual can of tuna or beans in a volunteer’s hands.

That said, Nicholls says monetary funds won’t only go to purchasing food–they’ll also go to distributing it to clients and raising awareness of local poverty.

But while the organization is clear that monetary donations can better serve the community’s needs, they’re not about to turn anyone away–nor are they ungrateful for food donations.

“At this point, we continue to rely on donated products that come from people and companies and sources across the city, so if it’s give canned goods or nothing, we definitely appreciate them,” says Nicholls. “We would say consider cash donations because we can stretch money and purchase more food with it and make sure it’s food we need. We don’t want to be ungrateful, the community has given us food for 30 years and we need that for the foreseeable future. But if people can make the switch, it means we can buy healthier products for people who are hungry in Mississauga.”

So, if you want to donate to your local food bank–especially if you plan on making a Christmas time donation–you may want to consider giving money instead of food. The Food Bank’s dollars stretch further and they know better what products clients are looking for.

That said, if you have some cans of healthy proteins ready to go, don’t hesitate to give them to people in need. Something is always better than nothing, especially this time of year.