The garden at the Niagara Parks Floral Clock is changed twice a year with coloured stones filling the spot during the winter.

It remains one of the most photographed fixtures in Niagara Falls – part clock, part garden, part pond and 100 per cent tourist attraction.

The Niagara Parks Floral Clock, on Niagara Parkway as travellers head from the falls to Niagara-on-the-Lake, has been a fixture for 72 years as steady and regular as the chimes in the tower behind it sounding off every quarter hour. 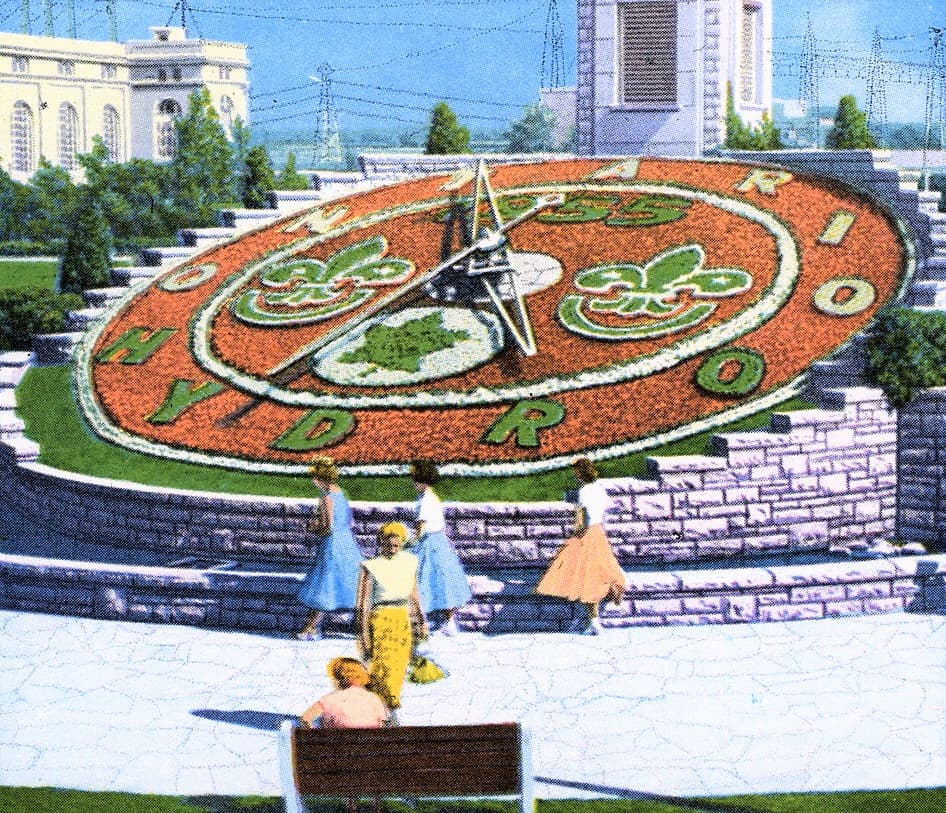 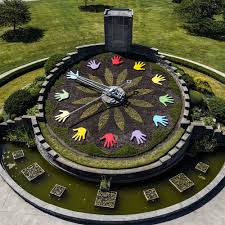 Above left, in 1958, the clock honored the Boy Scouts of Canada while to the right, the hands of children around the world.

Originally created and maintained by Ontario Hydro in 1950, the planted face of the clock is now tended to and changed twice-yearly by by Niagara Parks horticulture staff, while the mechanism inside is kept in working order by Ontario Power Generation.

As befits 72 years of existence, the clock has its own colourful history.

“The idea for the Floral Clock originally came from Scotland,” said Niagara Falls Public Library (NFPL). “Dr. Richard Hearn, Ontario Hydro’s general manager and chief engineer, visited Scotland on a business trip in 1950. He was told to visit a smaller floral clock in the Princess Street Gardens in Edinburgh that was originally constructed in 1903.”

According to the library, “He took many photos of the clock and thought that it might be a welcome addition to the landscaping project that was taking place at the Sir Adam Beck Generating Station. He thought that it would be both practical as well as being a unique diversion for anyone touring the plant.” 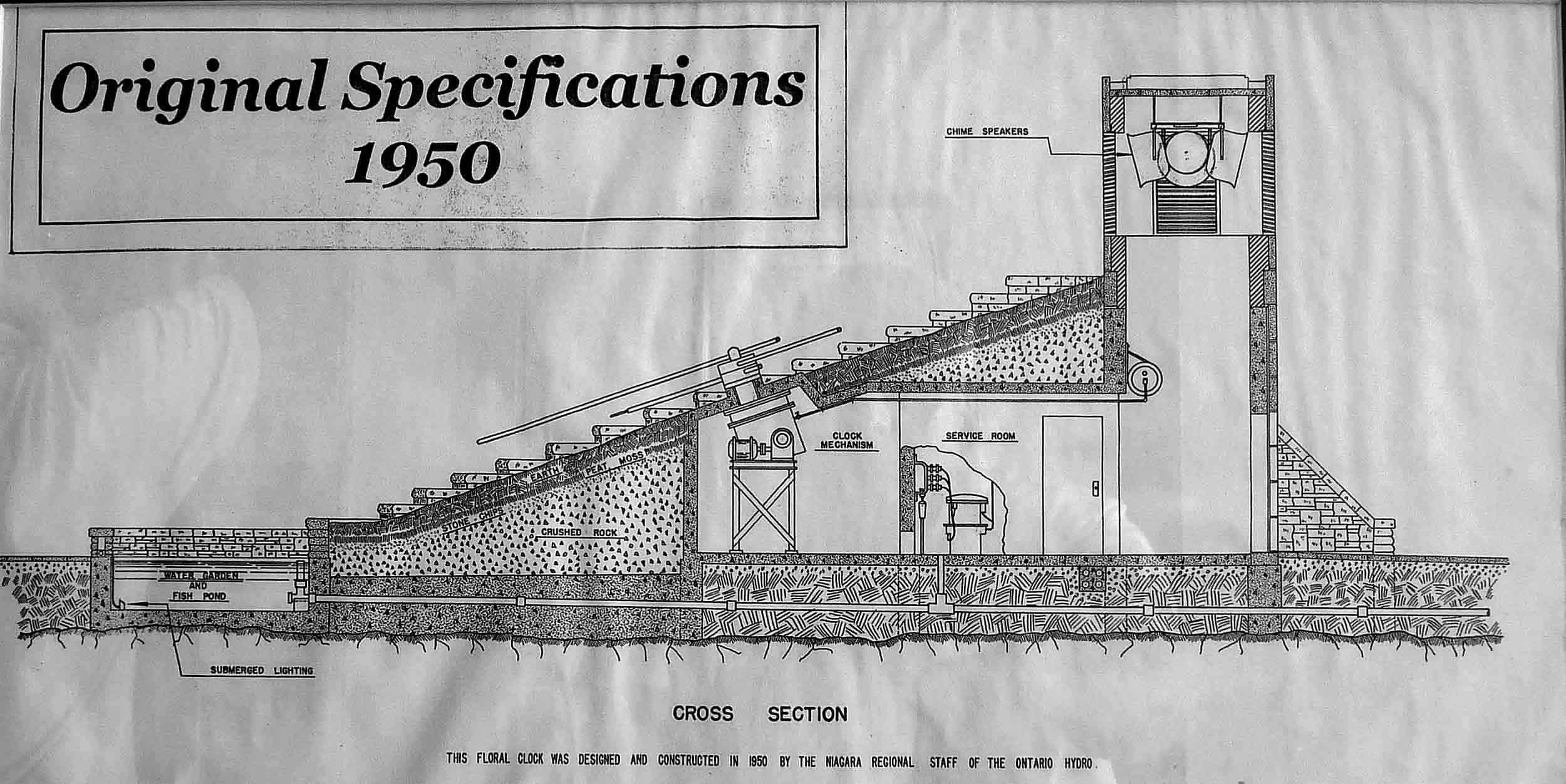 The original schematics of the Ontario Hydro Floral Clock in 1950.

“It took the entire summer season in 1950 to build the clock and all of the construction work was done by Ontario Hydro staff. The clock is three times larger than its Scottish predecessor, measuring 40 feet in diameter,” said the NFPL.

Constructed of steel tubing, the hour and minute hand each weigh in at 500 pounds. Measuring in as the longest at 21 feet, the sweep second hand weighs 250 pounds. The clock mechanism is driven by a two-horsepower motor and the entire mechanism system for the clock was designed and manufactured locally by Ontario Hydro staff.

Said the NFPL, under the clock, there is a reinforced concrete structure consisting of three rooms. One room houses the clock mechanism and motor, the middle room holds transformers and switches and the third room is used to store garden tools and other maintenance equipment.

Rising 12 feet above the clock immediately behind it is the 24 foot stone tower where the Westminster chimes ring on the quarter hour. 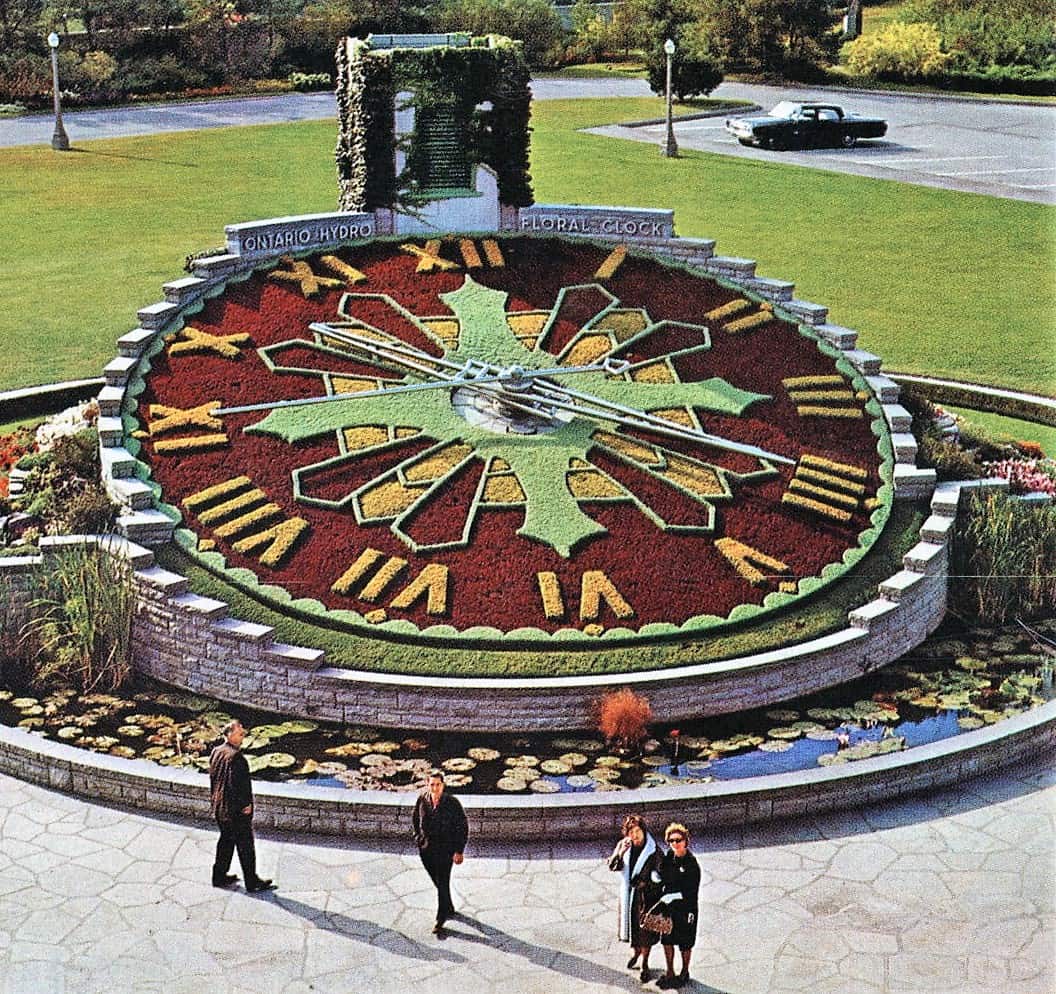 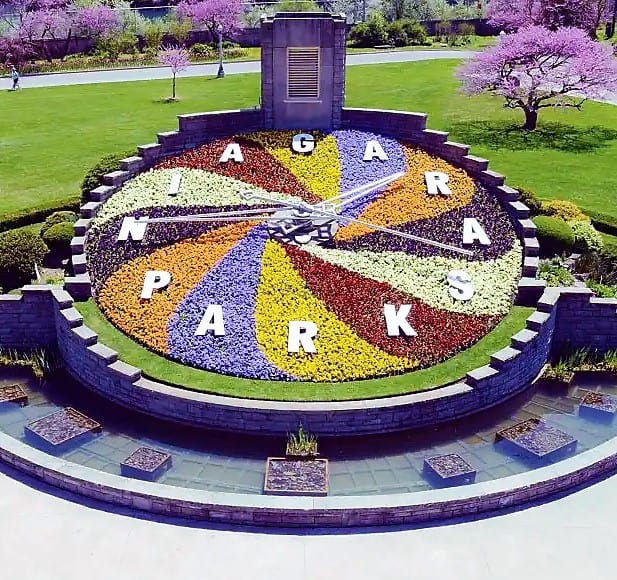 The left photo from the 1970s shows Ontario Hydro still maintaining the clock while to the right, it’s clear that Niagara Parks is the caretaker at that point.

“Curving around the front of the clock, the large pond is approximately 85 feet long and 10 feet wide and is stocked with various marine plants and even some goldfish!” said the library.

“Throughout the years this pond was a popular place where visitors could make a wish after tossing a coin into the water. Coins from many different countries are found in the fountain every year and when the money is pulled from the pond, it is distributed to various local charities.”

But the real draw is, of course, the thousands of flowers and plants that are used to fill the Floral Clock. As many as 24,000 plants are used by expert horticulturalists and students of the Niagara Parks School of Horticulture to create the different designs that are selected each year.

Every year, there is an annual spring planting and a second planting for the summer season. “Staff and students from the School of Horticulture work hard to maintain, water and trim the clock at regular intervals.”

During the winter, decorative stone chips replace the plants on the face of the clock. “The next time that you need to check the accuracy of your wristwatch, the Floral Clock just might be the perfect place to be,” said the NFPL.

The hands of the clock prior to installation in 1950. The three hands weigh 1,250 pounds between them.