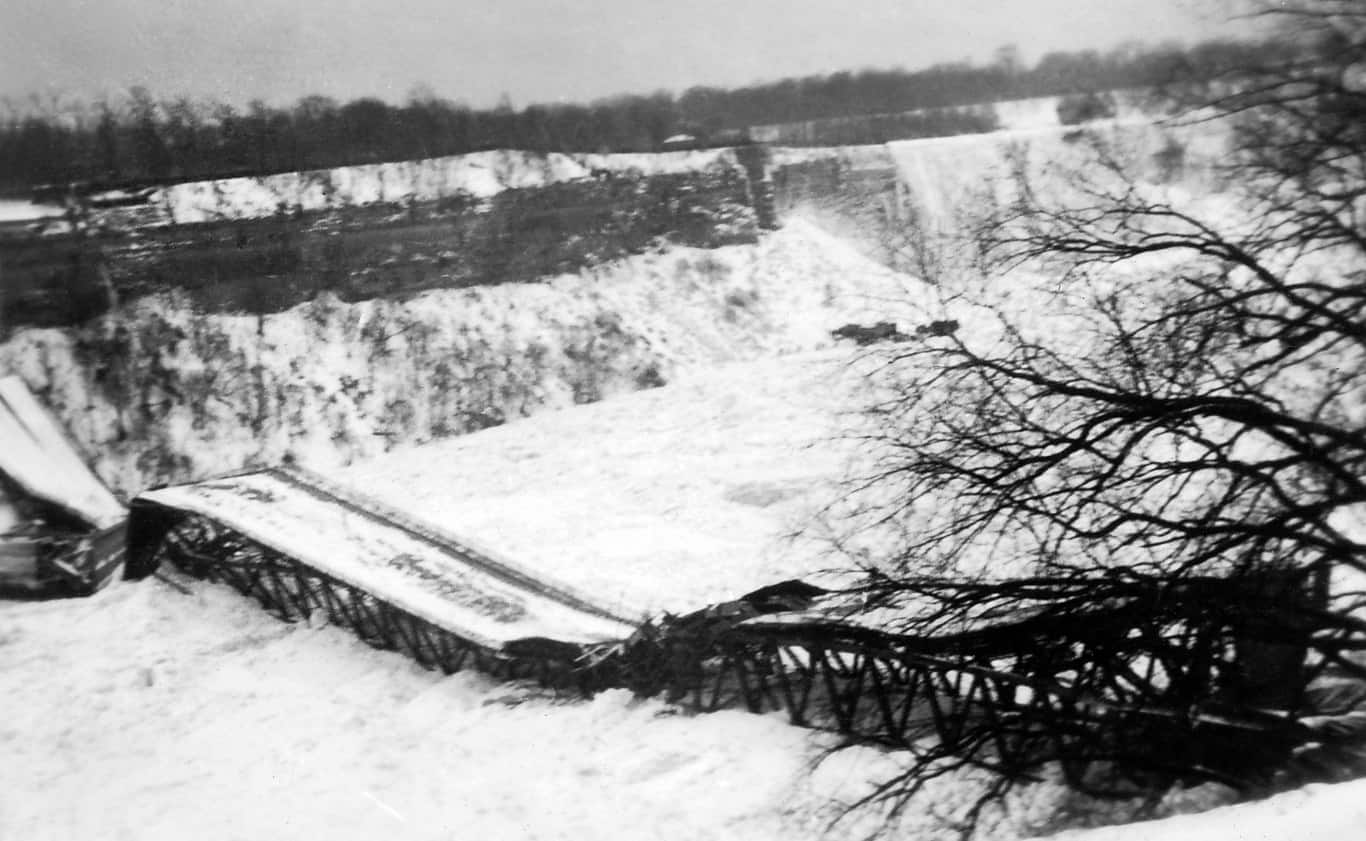 This was the scene when the Honeymoon Bridge connecting Ontario to New York State collapsed on January 27, 1928. (Photo by Frank O. Seed of Niagara Falls, New York)

When the Niagara Falls border bridge was built and opened early 1898, it was at 840 feet (260 metres) the longest bridge in the world.

Some 40 years later, it lay as the world’s longest pile of rubble on the Niagara River after an unexpected collapse.

Known as both the Honeymoon Bridge and the Falls View Bridge at the time, cliftonhill.com described it as “a lovely and graceful structure that provided a breathtaking perspective of the Falls.”

How it collapsed has to be preceded by his history. According to niagarafallsinfo.com, the bridge was built in 1897-1898 by the Pencoyd Bridge Company of Philadelphia, under the direction of Engineer R.S. Buck.

“At that time it was the greatest steel arch bridge in the world,” the website said. “The bridge was a two hinged arch with a latticed rib and its span was 840 feet long with trusses connecting the main span to the top of each shoreline. The abutments for this bridge extended to the base of the gorge and were situated next to the rivers edge.”

Those abutments and their proximity to the Niagara River would eventually prove to be the bridge’s undoing. The fourth bridge at this site – the previous ones all being less-stable suspension bridges – the main structure was all steels, pillars, cross-beams, everything as you can see in the below drawing from the year 1898. That portion was referred to as the Upper Steel Arch Bridge.

However, because asphalt was not yet used at the time (roads were still crumbled gravel or just earth), the actual crossing portion of the bridge was made entirely of wood. That often made conditions on the bridge for pedestrians, horse-and-buggies (later cars) and electric rail somewhat precarious, especially when it was wet.

In 1930, an American motorist crossing the bridge into Canada hit the brakes of his car, skidded completely off the bridge, into the gorge and fell to his death.

High winds also wreaked havoc on the bridge which many times was lined with sight-seeing pedestrians. In one instance, watching the 1925 Festival of Lights deeply lined the bridge, standing side-by-side with street cars and cars to see the many lights and fireworks.

In the high wind, the bridge started swaying so much that pedestrians had trouble walking and several of the bridge lights broke. The bridge was completely cleared without a single incident but cracks in the bridge’s veneer were seriously starting to show.

However, in actual fact, those cracks started one year after it was built. In 1899, the ice climbed some 80 feet up the abutments, going so high up the legs that it was also forming on the archway of the bridge. Some of the steel abutments started to bend under the pressure from the ice.

Workers on both the Canadian and American sides were brought in to blast the ice off the steel. Later when the weather warmed in the summer, protective walls were built around the previously-exposed beams. That seemed to do the trick – or at least for 39 years.

Fast forward to January 23rd, 1938 when a sudden wind storm on Lake Erie sent huge chunks of ice down the Niagara River and over the falls. Within 12 hours, the foot of the falls had so much ice that it wasn’t flowing into Lake Ontario. Instead, it kept building up, climbing up the abutments and well onto the hinge supports.

Traffic was eventually halted on the bridge as it became apparent that it was bound to collapse. Knowing it was due to fall, thousands of spectators lined the rails on both sides of the falls, waiting to see it fall.

That’s precisely what happened four days later on January 27. Ice damage cause the abutments on the American side to come loose. Within minutes, the Canadian abutments, even further strained, also snapped and at 4:20 pm, the entire structure crashed into the river below.

The Maid of the Mist is shown in a 1920 photo below the old Honeymoon Bridge connecting the two Niagara Fall from Canada to the United States. (Photo taken by Ian Sutton of Australia)

Eventually, pieces of the collapsed bridge were either salvaged or simply sunk where they were.

Wisely, when the present-day Rainbow Bridge was built and opened on November 1941, it was 500 feet further away from the falls, giving ice the extra distance to avoid build-up at the base of the structure.

But because people knew for days that the Honeymoon Bridge was going to collapse in January 1938, film crews set up on the side of the gorge, film rolling until the fall. Below is a 1939 film that they would show audience as a newsreel before movies started in the theatres.