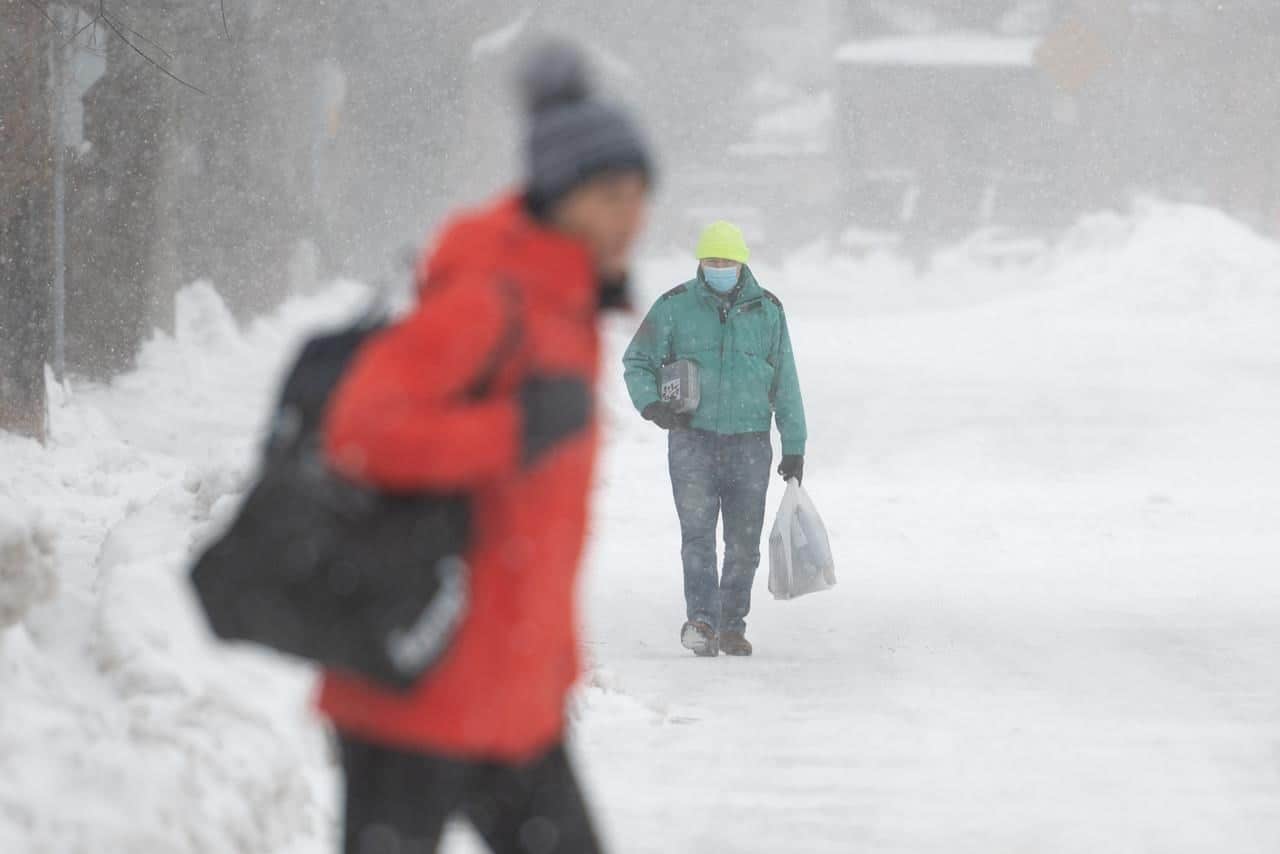 The latest news on storms and other extreme weather shutting down power and creating difficult travel conditions at the peak of the holiday season across Canada:

Ontario Provincial Police say the first traffic fatality since the start of the storm has been reported in the province, and officers are investigating whether or not extreme weather conditions played a part.

Sgt. Kerry Schmidt of the provincial police’s Highway Safety Division says Queen Elizabeth Way is closed in both directions between Niagara Falls and Fort Erie due to whiteout conditions.

Schmidt says closures are ongoing on Highway 401 between Tilbury and London as well as Highway 402 between Sarnia and London.

He says Highway 417 in the eastern part of the province and the 401 onto the Quebec border are now closed as well.

As well, there are smaller road closures and detours all across the province, and some municipalities are instituting states of emergency.

Lights are out for more than 35,000 power customers across Atlantic Canada.

New Brunswick has about 23,000 customers in the dark this afternoon following the high winds and rain that hit the province yesterday.

In Nova Scotia, where wind speeds were recorded as high as 115 kilometres an hour, about 9,600 customers are without power.

On Prince Edward Island, Maritime Electric says about 2,000 customers are without electricity.

Snowfall warnings have been issued for northern Alberta, stretching from Peace River in the province’s northwest and extending into Saskatchewan south to Saskatoon on Christmas Day.

Environment Canada says between 10 and 15 centimetres of snow are expected.

The City of Saskatoon warns that wind gusts could reach 60 kilometres per hour and that anyone who’s outside should watch for blue and amber lights on snow-clearing equipment.

Strong winds, freezing rain and snow are also forecast for parts of southern Alberta and Saskatchewan.

Canada’s Minister of Transport Omar Alghabra has taken to Twitter to call the situation with Via Rail “unacceptable,” as many passengers report massive delays and cancelled trips due to the storm.

Alghabra says his office is in touch with Via Rail in hopes of resolving issues “safely and efficiently.”

He says the unprecedented weather has caused delays in Canada’s transportation system and the safety of passengers and crew is top priority.

Some passengers on Via Rail trains that were immobilized overnight en route to Toronto say they are being forced off trains in Oshawa ahead of their final destinations.

Hydro One says more than 76,000 customers across Ontario are still without power due to the winter storm and it may take multiple days to restore power to all customers.

The utility says its crews have made significant progress restoring power to more than 230,000 customers in the province affected by outages, but it anticipates more outages will be reported today as severe winds and extreme conditions persist.

Hydro One’s chief operating officer David Lebeter says it is using every available resource to restore power as soon as it is safe to do so, but road closures and hazardous driving conditions make it unsafe for crews to respond immediately.

The utility is reminding residents to stay at least 10 metres away from fallen power lines, even if they do not appear to be live.

Transport Quebec is urging people to remain prudent on the roads.

While most roads in the province are open, blowing snow and icy conditions can make driving dangerous.

Spokesperson Gilles Payer says snow squalls can bring snow back onto roads that have been cleared by road crews.

He says regions north of the St-Lawrence river are most affected by the weather conditions.

Some passengers who have been stuck on Via Rail trains between Quebec and Ontario say they are finally moving toward their destinations, nearly 24 hours after boarding, after being picked up by rescue trains from Toronto.

Passenger Vee Grunda on Via rail train 55, which had been stuck in Cobourg, Ont., since 11 p.m. last night, says she was given one oat bar, a small water bottle and a choice between coffee or tea on the replacement train after going without food and water for hours.

Grunda says passengers were helped onto the replacement train by firefighters, who also offered medical support to some.

Via Rail has cancelled more than 20 trains scheduled to run today due to extreme weather, and it says significant delays are expected along the Quebec City-Windsor corridor.

Most of southern British Columbia remains under winter storm or rainfall warnings with Environment Canada suggesting the Metro Vancouver area could see 25 to 50 millimetres of rain today.

On Vancouver Island, as much as 125 millimetres of rain is expected.

The weather agency warns that the heavy rainfall could lead to localized flooding in low-lying areas.

B.C.’s river forecast centre has issued a flood watch for the Englishman River and South Vancouver Island and a high streamflow advisory for Vancouver Island, the south coast, the lower mainland.

Environment Canada says weather alerts remain in effect for Newfoundland and Labrador, as well as parts of Prince Edward Island and Ontario as the effects of a major winter storm that hit six provinces continue to be felt.

Meteorologist Gerald Cheng says the centre of the storm is now just south of James Bay, but the large storm continues to cause high winds in regions where it passed through yesterday.

He says Newfoundland and Labrador can expect a “wintery mix” of snow, followed by ice pellets and freezing rain, and then by rain.

In parts of Southern Ontario along the great lakes, blizzard conditions are continuing and some effects of the storm may last until Wednesday.

A Halifax woman visiting her parents near Campbellton, N.B. is eagerly awaiting the arrival of her sister and young nephew who have been on a Via Rail train since Friday evening.

Killa Atencio says her sister and four-year-old nephew were scheduled to depart Montreal around 7 p.m. Friday, but due to extreme weather they were stuck on an unmoving train for 13 hours.

The train eventually got moving around 8 a.m. Saturday, which is an hour after they were scheduled to arrive in New Brunswick.

Barring any further travel disruptions, Atencio says the mother and son will have spent more than 24 hours on the train.

Roads and stretches of highway are also closed in many parts of the province, including all roads in the townships of Woolwich, Wilmot and Dufferin County.

OPP says no traffic fatalities have been reported since the start of the storm but is warning residents to avoid travel until conditions improve.

Hydro-Québec says it’s too soon to say when it will be able to restore power to people across the province, as icy conditions continue to slow work.

The utility says around 300,000 customers are currently without power, many of whom lost power overnight as the storm reached new parts of the province and snow accumulations downed branched and trees, leading to outages.

Sophie Brochu, the Crown corporation’s CEO, told reporters that it has reconnected more than 200,000 people since yesterday afternoon, but that another 200,000 people have lost power during the same period.

Tens of thousands of customers are without power as a major storm continues to batter parts of Ontario.

Hydro One is reporting more than 1,500 power outages as of 11:30 a.m. affecting more than 78,000 customers, with the largest outages affecting regions near Ottawa, Toronto and Kingston, Ont.

Smaller pockets of outages are also affecting northern and central regions in the province, with outages stretching from Chatham-Kent to Cornwall.

Nova Scotia Power says lights are back on at more than 90,000 households in the province, leaving fewer than 14,000 homes in the dark.

The private utility’s storm lead Matt Drover says that outages are mostly concentrated in the western and central parts of the province where wind speeds topped 115 kilometres an hour last night.

Drover says 300 Nova Scotia Power crew members have been working on restoring power through the night, and he expects the majority of homes will have power restored by the end of the day.

Via Rail says nine trains running between Quebec City and Windsor have been immobilized due to extreme weather conditions, and some passengers on social media say they have been stuck for over 18 hours without food or water.

The rail service says nine trains are currently stuck due to power outages, trees on tracks and even a tree falling on a locomotive.

Passenger Vee Grunda on Via train 55, which left Ottawa at 3:30 p.m. on Friday for Toronto, says she has been stuck in Cobourg, Ont., since 11 p.m. last night without food, water or communication from staff onboard.

Grunda says some passengers are jumping off the train into the snow, and police and paramedic services are onboard as they wait for an emergency train to arrive with food.

Via Rail says to expect significant service delays in the Quebec City-Windsor corridor today and is urging passengers to check its website before going to Via stations.

More than 320,000 Hydro-Québec customers remain without power this morning, including nearly 80,000 in the Quebec City area.

In the Côte-Nord region of northeastern Quebec, more than half of Hydro-Québec customers are without power, while in the Saguenay–Lac-Saint-Jean region, power outages continue to affect around a third of the utility’s customers.

Quebec City and the city of Saguenay have opened warming shelters for residents without power.

Several provincial roads remain closed and a number of ferry crossings along the St-Lawrence River have been cancelled due to continued poor conditions.

WestJet says 60 flights scheduled to fly out of Toronto Pearson Airport today have been cancelled, as well as one flight scheduled for Sunday that’s been cancelled ahead of Christmas Day.

WestJet cancelled all flights at airports in Ontario, Quebec and British Columbia on Friday with affected airports including those in Toronto, Ottawa, London, Ont., Waterloo, Ont., and Montreal.

WestJet’s Chief Operations Officer Diederik Pen says the company apologizes for the disruptions to holiday travel plans and its teams are trying to recover operations on the ground and in the air.

Pen says the extreme and prolonged weather impacting regions across B.C., southern Ontario and Quebec are unlike anything the company has ever experienced.

Lights are out for more than 90,000 power customers across Atlantic Canada.

About 41,000 customers in Nova Scotia are still without power as of late morning after high winds reaching more than 115 kilometres an hour had knocked out electricity for about 104,000 customers.

In New Brunswick, 669 regional outages had about 41,051 customers in the dark.

And on Prince Edward Island, Maritime Electric says about 10,250 customers are without electricity.