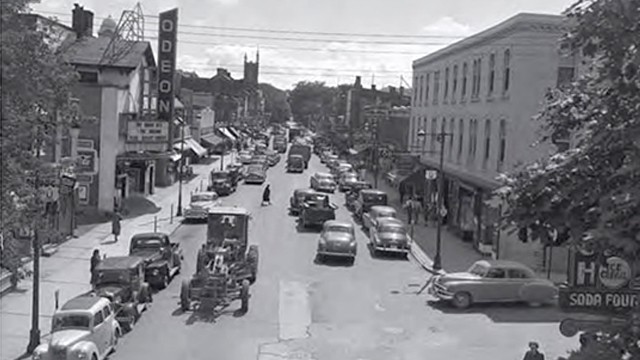 The city of Brampton has plans to sell its iconic–but currently unoccupied–Heritage Theatre. Here’s a walk through its incredible history!

The city of Brampton has plans to sell its iconic–but currently unoccupied–Heritage Theatre. Here’s a walk through its incredible history!

A recent city report argues that the three-story property, part of a continuous stretch of buildings known as the Heritage Theatre Block, is worthy of designation under Part IV of the Ontario Heritage Act because of its cultural value. But while the city and residents understand the value of the classic structure, the fact remains that it’s not currently in use (or, to put a more positive spin on it, could be put to better use).

But while the structure isn’t much to look at right now (hence the city is looking for a buyer who can work with a heritage building), it has a long and storied history that’s outlined in fascinating detail in the city’s report.

According to the report, the three-storey building–constructed in 1922 and officially opened in 1923–was designed by acclaimed Toronto architects Herbert George Duerr and B. Kingston Hall. In 1919, Duerr (who was known for building theatres) and Hall formed a partnership focused on theatres–a venture that made sense at a time when movies (better known as motion pictures at the time) were starting to catch on. The theatre can seat up to 714 people, a size that was apparently quite rare for theatres outside of major cities in the 1920s. That said, the report notes that Brampton had the population to support the Capitol Theatre (which it was called at the time), along with the Giffen Theatre on Queen Street.

The theatre was initially built to host vaudeville performances, but went on to play silent films.

“Unlike many of the surviving theatres designed by Duerr and Hall, which were built after the end of the silent film era, the Heritage Theatre was adapted to conform with the changing arts and culture fabric of North America during the crucial transition to ‘talkies’,” the report reads.

Because you cannot enter the theatre as it is right now, it’s nice to remember (or learn about) what it looked like in its heyday. According to the report, the interior features an auditorium that was designed with perfect acoustics in mind. An orchestra pit was originally located near the stage, but was removed after the silent film era ended to allow for more seating. Interestingly enough, the ceiling still has its original decorative pressed tin frieze in the Liberty Torch pattern (the walls also match the ceiling).

The theatre was owned by Thomas H. Moorehead, who was a Peel magistrate. According to the report, he started a theatre chain with the Capitol and expanded to Ottawa, Orillia, Midland, Welland, St. Thomas, London and Belleville. Moorehead later sold the theatre to Les Gregory, who later died in a private plane crash. After Gregory’s death, the theatre was sold again and went on to survive a historic 1948 flood.

In 1949, the Canadian Odeon Theatre chain took ownership of the building and re-named it the Odeon Theatre, which it remained until it was purchased by the city of Brampton in 1981. After the city took ownership, it was transformed back into a live theatre venue and reopened as such in 1983. In 1989, the city, with help from the province, restored the structure and re-named it the The Heritage Theatre for the Performing Arts.

The theatre has been unoccupied since 2006 (the year the Rose Theatre opened).

Interestingly enough, the report notes that the theatre was the site of large and heated political rallies. It was also home to a number of high school plays.

As far as performers go, the theatre hosted a few notable ones over the years. The Dumbells, a troupe of World War One veteran entertainers, played at the theatre in 1926.

At this point, the future of the theatre is unclear. The city is currently discussing the prospect of selling it–ideally to a buyer who can manage a heritage property appropriately.

It’ll be interesting to see what becomes of the almost-century old structure.

All photos courtesy of this report.