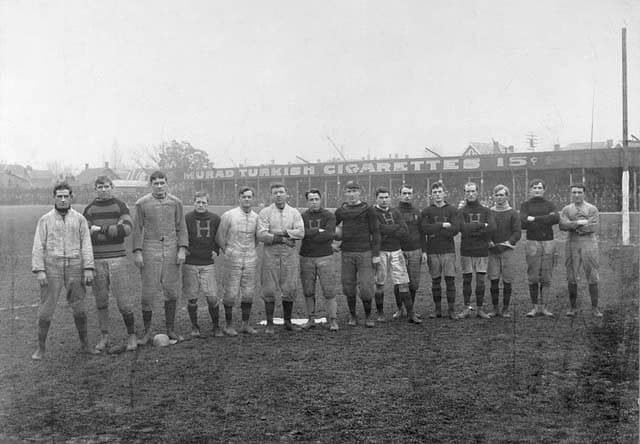 The 108th edition of the Canadian Football League championship game will take place at Tim Hortons Field, the same hallowed ground that hosted three-down gridiron’s holy grail in 1996 when Ivor Wynne Stadium occupied the same property between Balsam and Melrose.

The 2021 Grey Cup will mark the 11th time Hamilton has hosted, but only three of those games have been played in the city’s iconic stadium. The other seven games were played at the cusp of the city’s west end at the Hamilton Amateur Athletic Association (HAAA) Grounds.

The 7-acre park is the oldest sports park in the City of Hamilton and hosted seven Grey Cup championships between 1920 and 1935.

Located within the Kirkendall Neighborhood on the north side of Charlton Ave., just east of Locke and west of Queen, it was home to the Hamilton Cricket Club (1874-1910) and the Hamilton Rugby/Football Club (1872-1949).

When the Grey Cup was played at The Grounds, the game didn’t look like the brand of football Canadians have become accustomed to. Instead, the sports resembled something closer to rugby.

The park was called the AAA Grounds and Hamilton Cricket Grounds in 1910 and it saw the University of Toronto Varsity Blues defeat the Hamilton Tigers, 16-7 in the 2nd Grey Cup.

U of T won a championship so you know it’s unlikely they were playing football.

The 2nd Grey Cup took place in front of a large crowd of 12,000, which posed a problem for event staff as a mob of people stormed through the admission gates. It was estimated that several thousand watched the game for free. According to reports at the time, all of those extra fans crowded the sidelines and blocked sightlines for paying customers.

While I can’t confirm, I feel confident in speculating that those unruly fans were entirely from Toronto as almost 5,000 Varsity fans travelled to Hamilton for the game.

The 4th Grey Cup was historic for Hamilton as the hometown Alerts beat the Toronto Argonauts, 11–4 at the Hamilton Cricket Grounds, but it wasn’t without controversy.

The Toronto Rowing and Athletic Club protested a penalty call in the loss and the Ontario Rugby Football Union (ORFU) ordered that the game be replayed. Hamilton, though, refused to field a full team as they already had a game scheduled against their inner-city rivals, the Hamilton Tigers. So the Alerts sent their backups to play Toronto and lost the rematch 39-7, resulting in the league suspending the Hamilton Alerts for “flaunting the authority of the Union,” according to FootballCanada.com

Regardless, the record books have been written and the Hamilton Alerts are the winners of the 1912 Grey Cup.

The 5th Grey Cup was such a predictable mismatch on paper that it only drew 2,000 fans to the Hamilton Cricket Grounds in 1913.

The game went exactly as expected as the experienced Hamilton Tigers mauled the young Parkdale Canoe Club, 44-2. I mean, just the name’s of the teams could have tipped you off to the result, which to this day stands as the biggest blowout in Grey Cup history.

The win marked the first Grey Cup victory for the Hamilton Tigers.

“Tigers showed up with everything a football team should have – everything. They had speed, strength, tackling ability, trick plays along the line, and was backed up by a faultless catching and kicking and running half-line, and above all, they had superb team play.”

It was the final time Parkdale advanced to the Grey Cup game while the Tigers’ success continued for decades.

The 16th Grey Cup was played before 4,767 fans at the A.A.A. Grounds as the game returned to Hamilton for the first time since the first World War.

The Hamilton Tigers shut out the Regina Roughriders, 30-0; a win especially impressive considering the Riders hadn’t lost a game in three years and hadn’t allowed a single touchdown during their streak.

Those streaks came to a crashing end in Hamilton as the Tigers opened the scoring with a Brian Timmis touchdown and the team never looked back.

The 1928 Grey Cup marked the first time a play-by-play broadcast of the game was available on the radio.

The Grey Cup returned to the AAA Grounds in Hamilton for its 17th installment and featured a rematch of the 1928 game.

It was the first time in the championship game’s history that the same two clubs met in consecutive seasons. It was also the first time a forward pass was permitted in Grey Cup competition.

The elements ensured this one was much closer than the previous game but still resulted in a Hamilton win, as the Tigers beat the Regina Roughriders, 14-3.

“Weather was a factor as a driving snow and freezing temperatures forced fans to run for shelter prior to the game,” according to the Canadian Football League official website. “Only 100 fans witnessed the opening kickoff. In total, less than 2,000 braved the elements at the Hamilton Amateur Athletic Association Grounds, with a playing surface as hard as pavement.”

“Regina’s Jersey Jack Campbell made Grey Cup history in the second quarter, throwing the ball downfield for the first time. Hamilton’s Jimmy Simpson knocked the ball down in front of the intended receiver, but rules allowed the ball to still be playable. A mad scramble ensued with the Roughriders recovering the ball.”

It’s unfortunate this game wasn’t televised because the referee was reportedly knocked out of the game for a short period after running straight into the goal post following a play.

The weather may have played a factor.

Three years removed from their last championship encounter, Hamilton hosted Regina in the 20th Grey Cup in front of 4,806 fans at the AAA Grounds.

The Riders made history by playing in their fifth consecutive Grey Cup game, a record that would last 50 years. However, it also marked their fifth straight defeat in the national final.

Three years removed from their last championship encounter, Hamilton hosted Regina in the 20th Grey Cup in front of 4,806 fans at the AAA Grounds.

The 23rd Grey Cup was played at what is now known as the Hamilton Amateur Athletic Association Grounds with 6,405 fans in attendance.

It marked the first time that a team from west of Ontario won the cup with the creatively named Winnipeg ‘Pegs defeating the Hamilton Tigers, 18-12.

Winnipeg had seven imports in their lineup, making it the first Grey Cup game to feature non-Canadian players.

End of an Era

1935 marked the last time the HAAA Grounds hosted a Grey Cup game. The next time the big game would be played in Hamilton would be 1944 at Civic Stadium (later renamed Ivor Wynne Stadium). In that game, the St. Hyacinthe-Donnacona Navy defeated the Hamilton Flying Wildcats, 7-6 as the country dealt with the final years of World War II.

Today, the HAAA Grounds is in the early stages of a municipal renewal plan expected to take shape in 2021.

You can still run on the same field as the Hamilton Alerts and Hamilton Tigers, only it likely won’t be in front of thousands of fans from across Canada. Instead, you’ll run past an elementary school, a garden, a playground, a splash pad, a basketball court, and the Hamilton Tennis Club.

If you’re curious for more information, the grounds’ entrance off of Charlton features a plaque outlining more than 150 years of history at the Hamilton Amateur Athletic Association Grounds.