The Dry (Wet) Cleaners of Hollywood Right in Mississauga 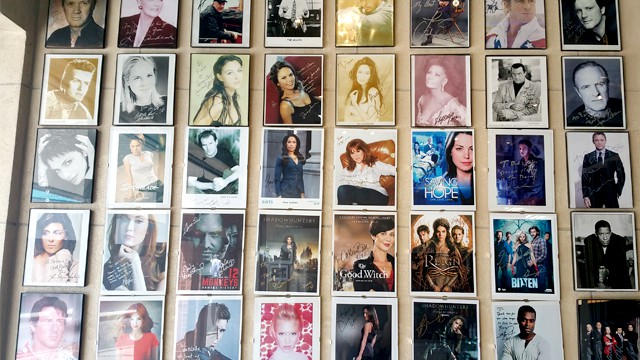 Mississauga is full of family-owned mom and pop shops that have stood the test of time, but few places can boast a serendipitous but long-standing connection to Hollywood.

TSC Wet Cleaning, a garment cleaning company located on Dundas St. E. that was established by a couple in 1988, has undergone its fair share of exciting transformations since its late 80s inception. Once a traditional dry cleaning operation, the company — now under the control of brothers Dino and Petro Kantzavelos (the sons of the original owners) — transitioned to wet cleaning technology back in 2009 to avoid the use of potentially dangerous, more toxic solvents and chemicals. It also continues to serve Toronto’s booming Hollywood North film industry, but more on that later.

“We heard that the chemicals we were using had negative things associated with them,” says Dino Kantzavelos. “Up until then, the majority of cleaners were using solvents and we were always investigating new solvents and there was a push towards wet cleaning and we were intrigued by it. We didn’t want to invest in a magic trick, so we did our research and went to seminars.”

When Kantzavelos began investigating the eco and health-friendly alternative to dry cleaning, he discovered that, at the time, only three facilities in Ontario were using wet cleaning technology. Fortunately for him, the companies were able to demonstrate that not only did wet cleaning remove toxic chemicals from the cleaning process, it was just as effective as traditional dry cleaning.

“We thought, ‘this is a no brainer.’ We used it to clean wool and cashmere and other materials usually kept out of water and thought it was amazing. We had heard that some of the chemicals [we once used] were linked to cancer and we were being exposed to them, so we wanted to get better for our staff and customers and the environment. It’s been the best thing we’ve ever done and we’re the only wet cleaners in Mississauga.”

Another thing that sets TSC apart is its Hollywood connection.

Over 25 years ago, TSC — then known as Trillium — did some work for the wardrobe department of a TV show called My Secret Identity, a series that ran from 1988 to 1991 and starred a very young Jerry O’Connell. Although there was no indication at the time that the work would lead to the development of a second business devoted to the film industry, a seed was more certainly planted.

“When we started, we had no exposure to the film industry, it fell into our laps,” Kantzavelos says. “When My Secret Identity was filming, a woman from the wardrobe department would come to us and we got things done and were convenient for her. When [filming ended], she left our business card on a bulletin board and basically wrote that if people were looking for a good cleaning service, they wouldn’t be disappointed.”

The kind and helpful note kick started the company’s involvement in film. Eventually, someone associated with the filming of Kung Fu: The Legend Continues saw the card and gave Trillium a call.

“That show blew up and became a huge part of our business,” he says. “I became close with Kung Fu staff and designers and we started doing pickups and deliveries for them.”

Eventually, Trillium launched a second business called Screen Clean that focused entirely on film clients. When the company switched over to wet cleaning in 2009, it merged the two companies, hence the name change to TSC (Trillium Screen Clean) Wet Clean.

Now, the company has provided garment care — often around the clock — to over 700 productions.

While celebrities do not typically pickup or deliver their garments personally, TSC has cleaned the clothes of some of the biggest A-listers out there. Some famous clients include Daniel Craig, Colin Firth, Halle Berry, Russell Crowe, Catherine Zeta-Jones, Denzel Washington and more.

While TSC has some big name clients, it is rare to get face time with stars. That said, it does happen.

“Most celebrities have never been in the store, but last year a really nice lady walked in and said her wardrobe department told her to come in. She gave us her name and number and it turned out she was Molly Ringwald. She’s probably the biggest star to walk in the door. I grew up in the 80s, so it was awesome. She’s on our wall of fame.”

Working with Hollywood clients has its challenges in terms of logistics, but Kantzavelos says nothing too crazy has happened beyond being asked to pick up a garment at midnight and have it cleaned and ready to go for a 5:30 a.m. call time.

In terms of requests, an unusual one once made by Steven Seagal actually signaled a forthcoming change in the wind in terms of cleaning technology.

“During the filming of Exit Wounds, Steven Seagal requested his clothes not be dry cleaned and this was before we were wet cleaners. He wanted his garments cleaned in water and we were able to do it for him. He’s big on environmental awareness.”

As for what the future holds for the company, TSC is always on the lookout for new technologies — and is active in helping create them.

“I developed our own soap with the help of a retired chemical engineer and we’re promoting it within the industry. We also partnered with a company called Green Dolphin to create Glide D and Glide C detergents and conditioners. We consult with other dry cleaning companies who want to switch over to wet cleaning. Dry cleaners reach out to us now.”

The fact that other industry insiders are interested in the new technology is a testament to TSC’s success, as their 2009 launch wasn’t met with much enthusiasm.

“When we launched Trillium Screen Clean, Hazel McCallion and city councilors came to the grand opening, but we didn’t have one person from our industry come out because it [wet cleaning] was considered a taboo thing. Now, there are three wet cleaners on the Ontario Fabricare Association Board and some of them trained in my shop.”

While the service obviously resonates with customers in terms of turnaround and quality, there’s also the personal touch that keeps people—famous and non-famous—coming back.

Recently, Kantzavelos cleaned a suit for a customer who had been coming to the shop with his father since he was a small child. Now, he’s in university.

“He followed where his parents went shopping,” he says. “He’s a second generation customer, it’s come full circle. We work hard for that. Without our customers, we’re nothing. We have to provide a good service. Coming in here feels like a hug.”