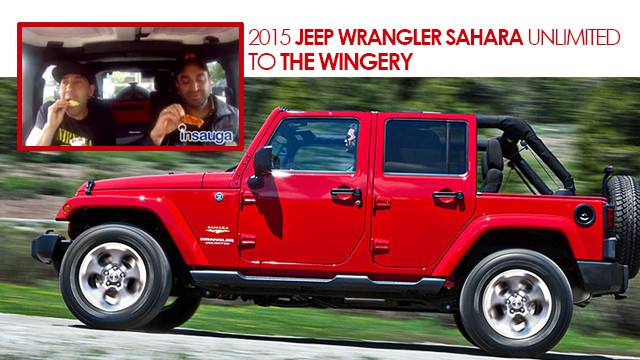 We have a new segment called Test Drives to Top Fives where we film Khaled and Jay test driving new cars while driving them to Top 5 restaurants in Mississauga. Check out Jay Kana’s in-depth car review and check out the video below.

One of my closest friends, Shaun drove a 1992 Jeep YJ in the late 90’s. It had seen better days, needed some TLC, the teal green paint job was being invaded by rust and some of the dials kept you guessing. But he loved it through and through.

He took it in for what was supposed to be an oil change and a couple of hours later, he came home with a brand new beautiful 2004 silver TJ. I asked how good the salesperson must’ve been (my friend is just as stingy as me) to have him give up the beloved “Teal Green Machine” as we called it.

Shaun explained that he had strong loyalty to the brand, genuine love for the product which was built on the reliability and duration of the YJ.

On an interesting note, Shaun now oversees a Nissan dealership but still has an affinity for the Jeep brand.

Fast forward to 2015, where Jeep continues to build loyalty among off roaders and urban folks.
The current offering of the Jeep Wrangler Sahara Unlimited 4×4 is built to do your city bidding and fulfil your off road commands.

In Transformer-esque fashion, the roof panels and doors are removable to allow for a true Jeep experience, at least in the warmer months.

I was asked to describe the Wrangler and my immediate response was “Wear your best jeans, a collared dress shirt, do your hair nicely, put your watch and ring on for a touch of class. And then put your hiking boots on”.

The consistent simplicity and handsomeness in the Wrangler’s body is augmented by the massive 18” inch Bridgestone Dueler tires, P255/70R 18 to be exact.

It’s those massive tires that help provide a smooth, comfortable ride when you’re dealing with the congestion of city driving or watching left land bandits on the highway.

In a surprise to nobody, Jeep has called upon Chrysler’s award winning 3.6-litre Pentastar V-6 engine with 285 horsepower and 260 lb.-ft of torque to keep this Jeep in motion.

In a great balance between brains and brawn, the Wrangler’s acceleration is smooth off the line and powerful. Yes, I realize that it’s up to the operator but even as I tried to do a jack rabbit start off the line, the response was fluid with minimal interruptions.

Finding a comfortable seating position was a breeze (kinda like the breeze when I had the top off for a couple of days toting around town) and the infotainment system, while new to me, was easy to operate.

So what happens when your Jeep Wrangler, doors and roof off, is driving a rural route or a 400 series highway and you want to enjoy some tunes?

You call upon the nine speaker, Alpine sound system complete with subwoofer and summon all 552-watts of power.

Putting the subwoofer in is the equivalent of getting surprise backstage passes to your favourite concert.
The sound quality rivals that of a luxury offering and for a music enthusiast such as myself, I tip my hat to Jeep. Even if you’re not a music enthusiast, talk radio cut through crisply.

Amongst seven model trims and two different wheelbases, there’s plenty of Jeep to go around, so be prepared to mull over several options to find what you need to be freewheeling and carefree.

Cruising in the city or rockin’ the rural roads, the Jeep Wrangler Sahara can be dressed up or down.
Just make sure you’re home by midnight and always listen to your mother.