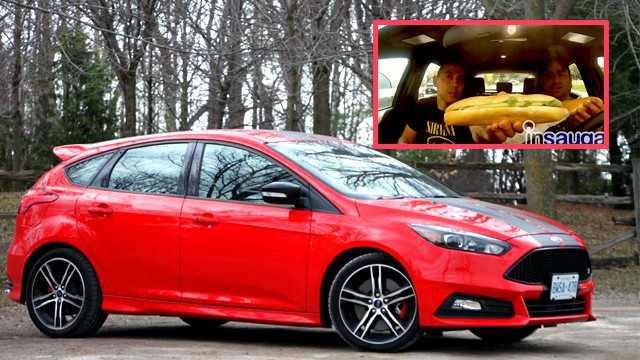 We have a new segment called Test Drives to Top Fives where we film Khaled and Jay test driving new cars while driving them to Top 5 restaurants in Mississauga. Check out Jay Kana’s in-depth car review and check out the video below.

The last time I was in an ST offering from the good folks at Ford, the Fiesta ST received a perfect 10. Heck, I’ll upgrade it to an 11. There was a perfect balance of power and driveability and fun.

When I checked my calendar and saw that I was due for the Fiesta ST’s big brother, the Focus ST, there was a bit of excitement in anticipation. Now with reviewing cars, you have to clean the slate every Monday (pick up day) to make sure you’re not favouring a car or having any preconceptions. And yes, I was able to do that. “Even Keel Kana” should be my nickname.

Even if I know I’m walking into bad or good news, I keep a clear mind and react accordingly and that has taken many years of practice to be able to do and say. I’ve walked into meetings where I know the company was downsizing, I’ve been on phone calls where I know I was getting a promotion. It’s all about keeping the expectation level at zero. Many a time in years past I was too sure of myself and the outcome has been dreadful.

I didn’t even check Ford’s website for the specs on the Focus ST. I treated it like every other vehicle I had; it’s four wheels and a body.  It’s a good thing I did that since my week was about to come to a roaring start.

The numbers are so impressive I have to lead with them: 252 horsepower. 2.0 Litre turbocharged engine, four cylinders. 270 lb.-ft. of torque. Base price $30,349. Three pedals. Six speeds and seven days.

The Titanium Ecoboost hatch has a respectable 160 horsepower so adding nearly another 100 on the same body is the pinnacle of a performance for the sport compact segment.

Boy oh boy this car is incredibly fast, fun and simply a joy to drive. There’s a balance of tremendous power at the wheels but it’s still good for booting around town and cruising on the highways and rural settings. And since it’s a hatchback, it’s got practicality stamped all over it. I only wish someone would’ve asked me to take them to Ikea or to move a ton of stuff.

I had to settle on moving myself and groceries and my girlfriend, Laura, around for the week. I took longer routes to and from places. I drove slower to spend more time in the car.

The shapely, centre-exit exhaust pipe adds a very aggressive look to the car’s rear.  The front end is equally handsome and has a strong yet subtle stance. 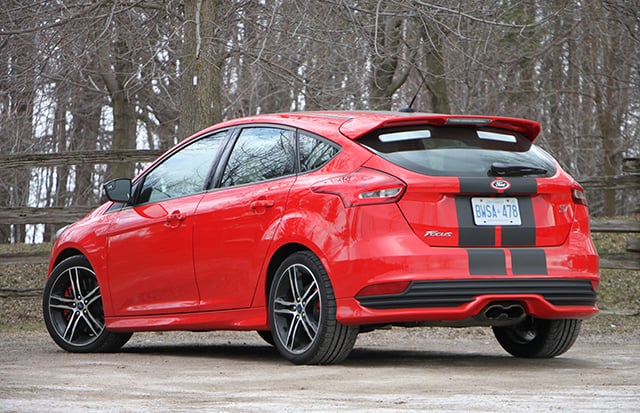 Put on some good looking shoes, your best jeans, a collared shirt, roll the sleeves up, thrown on a pair of sunglasses, make sure you have a 5 O’clock shadow (sorry Mats Sundin, that part doesn’t apply to you) and you’re perfectly matched for the car.

Oh I didn’t forget about the ladies. Jeans, blazer, heels and sunglasses.

Maybe it’s just me but it felt like the three pedals were slightly offset, meaning that instead of a straight line, there was curve to all three, kinda like an arc. It took me a few minutes to get used to it but once I did, it felt natural. I’m not quite prepared to challenge Michael Flatly, Mr. Lord of the Dance anytime soon but I can say that upshifting and downshifting was done with ease and delight. And often.

Speaking of shifting, the six-speed manual gearbox was so smooth that it felt like it was lined with velvet. The steering is responsive, accurate and hungry to take turns and curves as the approach you.

Power leather Recaro deep bucket seats will keep your backside in place and thigh and side supports ensure that, even for a robust fellow like myself.

The interior is typical “Focus-esque” except for the “ST” badging on the lower spoke of the flat bottomed steering wheel (how sporty and thoughtful, Ford!) 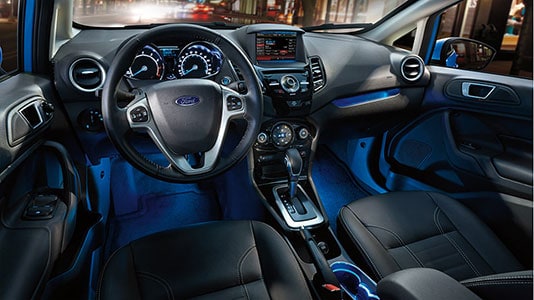 There’s the SYNC with MyFord touch technology which boasts an eight-inch screen and a sweet sounding audio system that makes the soundtrack to your exciting drive hit all the right notes.

I could easy top 2,000 words on this review but let’s be honest, it’s better if you take one out for a spin yourself to let the ST illustrate its power and practicality.

While I was able to contain my giddiness until I was handed the keys, there was no stopping my exhilaration for Ford’s remarkable sporty performance hatch.

Ford has created an excellent car with tons of power and utility and the price point is exactly where it should be.

No witty closing line this time. Simply a boring ol’ sign off. I suppose I can’t focus enough.
Oh, look, there it is.

P.S., Engineers at Ford; if I wore a hat, I’d tip it to you quite deliberately and often for the ST.