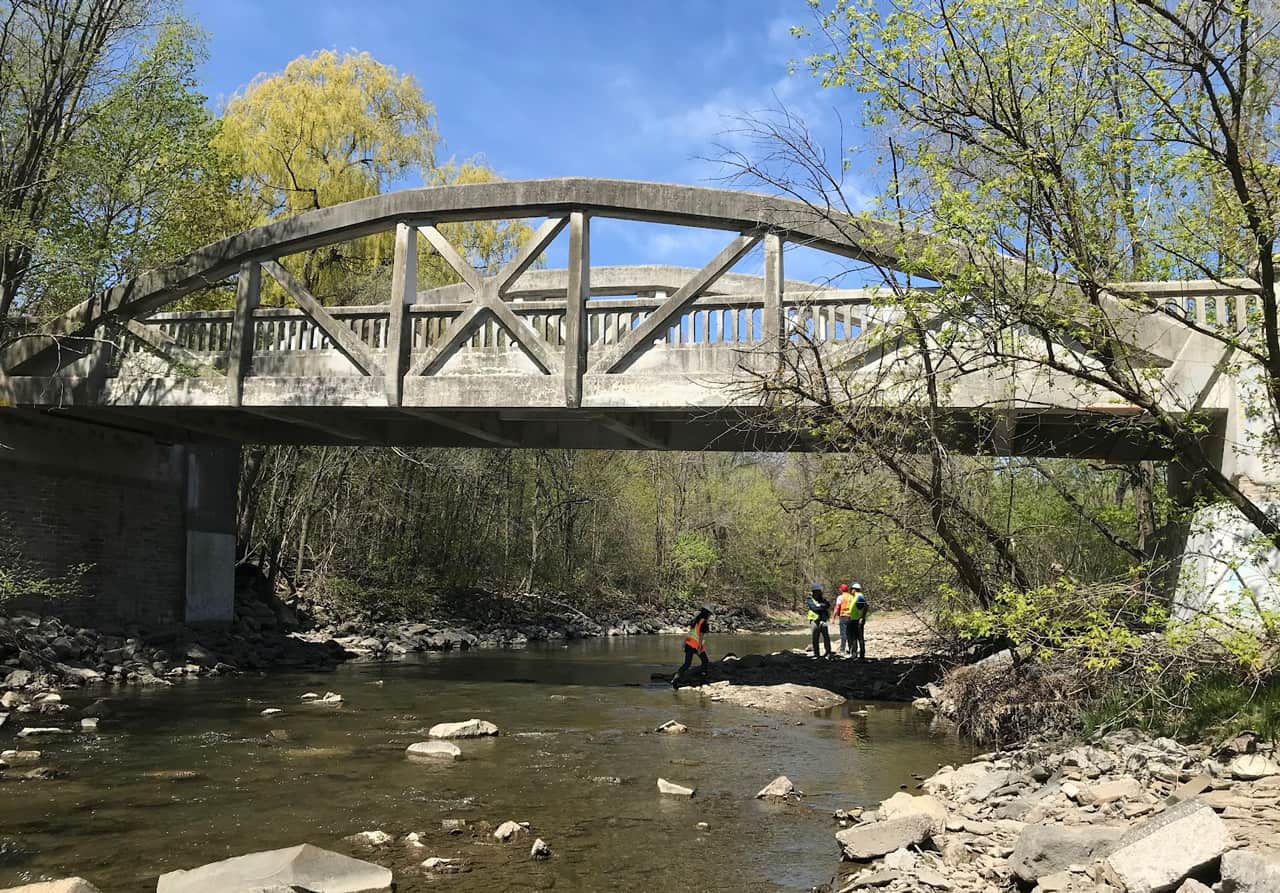 A crew who saved a historic Mississauga bridge was nominated for a restoration award.

A team contracted to save the Middle Road Bridge is up for the Architectural Conservancy of Ontario Peter Stokes Restoration Award: Small-Scale/Individual/Small Business for the rehabilitation of the historically significant bridge.

The bridge crosses the Etobicoke Creek between the Queensway and the QEW highway, connecting Mississauga and Etobicoke.

Built in 1909, the Middle Road Bridge (also known as Sherway Heritage Bridge) is the first example of a reinforced concrete truss or tied arch bridge in Canada, according to the Architectural Conservancy of Ontario.

Frank Barber of Barber and Young, a prominent bridge and structural engineer from Toronto, designed the bridge and O.L. Hicks of Humber Bay constructed it, according to Canada’s Historic Places Register.

It is now used as a footbridge but that wasn’t always the case.

“In the early 1900s, it was used by horses, carts and cattle to cross the waterway,” the register notes. “Later, automobiles used the bridge, although it only allowed for one lane of traffic.”

It needed some TLC recently and rather than tear it down AECOM, a construction engineering company, was contracted to extend the service life of the structure through rehabilitation. 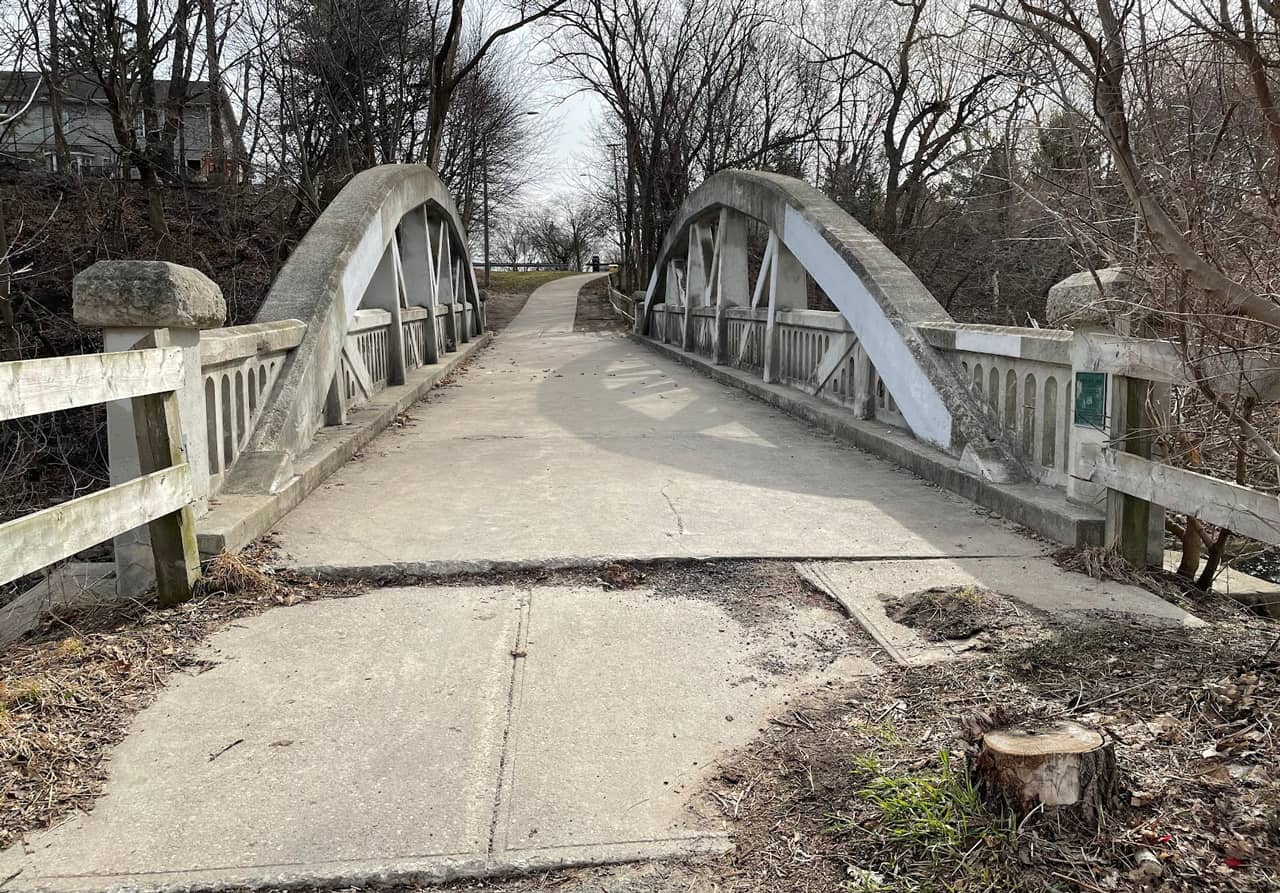 The Middle Road Bridge before repairs.

However, there are no original drawings from its initial construction and this presented a challenge for rehabilitation.

AECOM’s structural team used research from the Heritage Impact Assessment, including a 1909 article by bridge engineers, Barber & Young, to confirm how the bridge was intended to function.

“The project highlights the importance of a multi-disciplinary team including a heritage specialist, structural engineers, municipalities, and other stakeholders, working together to evaluate and rehabilitate the Middle Road Bridge,” notes the award nomination description.

“Understanding the bridge was the key to saving it.” 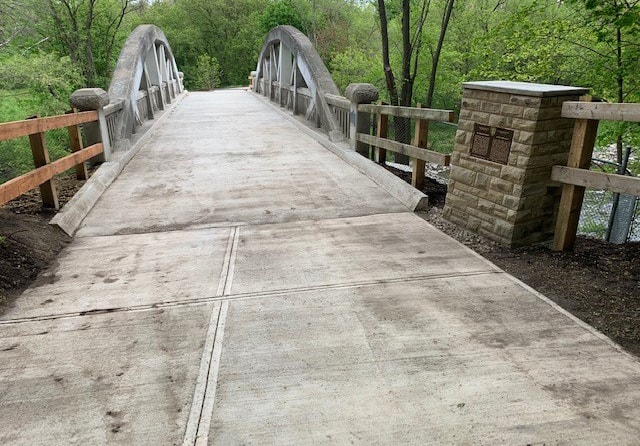 The Middle Road Bridge after repairs with a new plaque on a cairn.

The team reviewed historical documents and found a past repair was causing unplanned stress. The stress caused excessive cracking but the team worked to “unfix” the past work.

The project was completed in 2022 and the key pedestrian bridge is back in operation connecting the cities of Mississauga and Toronto over Etobicoke Creek.

Recently, the Canadian Society for Civil Engineering erected a plaque on a cairn made from stones like the stone abutment.