Mississauga has quickly grown from a bedroom community defined by sprawling single-family homes to an urbanizing hotspot that's home to chic and stylish residential skyscrapers that have fundamentally altered the city's once non-existent skyline.

But while 146 towers have been proposed for the City Centre core over the next 10 years, a development even more exciting has been kept secret from the masses for quite some time.

inSauga.com recently found out that two stunning towers that will almost match the CN Tower in height (in fact, one will actually have a few more storeys) are coming to the City Centre area.

You can see them here: 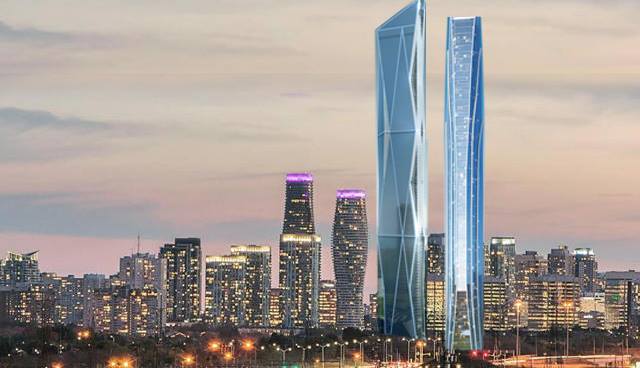 The striking glass towers, designed by April One Ltd., will be named The Hazel and The Bonnie. The Hazel—paying homage to one of Canada's most iconic mayors—will stand at a whopping 152 storeys.

The Bonnie will be just as spectacular, standing at 142 storeys.

While the towers are beautiful, the amenities will be something to behold. The Hazel will feature a seventh floor biodome that will function as the perfect recreation of an Amazonian rainforest. Some animals you can expect to find in the biodome? Howler monkeys, poison dart frogs, sloths, spider monkeys and toucans.

The Hazel will also be home to an extravagantly expensive restaurant helmed by a Michelin-star chef (and we can't reveal his or her identity, as that would spoil April One's big surprise).

Not to be outdone, the Bonnie will feature the city's largest and most luxurious spa, a multi-million dollar, diamond-encrusted chandelier, an Olympic-size swimming pool with an 100 foot water slide and a stunning aquarium.

In fact, the aquarium will be home to some of the world's most stunning tiger sharks.

Did you fall for our April's Fools joke ;)?