One of Mississauga’s most iconic figures is being celebrated with a huge historical exhibit opening this Tuesday at Erin Mills Town Centre.

Call her tough as nails, scrappy, persistent in aggressively dealing with the politicians of her day at the various levels of government and a fierce defender of all things Mississauga—but never call her a shrinking violet.

Most of all, you can call her Hurricane Hazel, the moniker by which she became widely known during her 36-year reign as Mississauga’s fifth mayor.

Leaders from across Canada and the community, local dignitaries, family, friends and McCallion herself will be on hand this Tuesday to officially open the sweeping exhibit of art and various displays that organizers describe as “an opportunity to remember, participate and celebrate interactively and immerse yourself in everything Hazel.

“The stories told through art and displays are an educational experience for our younger generation,” organizers continued. “A life journey of a remarkable woman who has broken barriers for most of her life as a daughter, wife, mother, athlete, businesswoman, humanitarian, politician and mentor. A true force to be reckoned with. Hazel has given so much to our city and continues to consult with renowned leaders who seek her counsel.”

McCallion, who turned 100 last Feb. 14 and remains active on advisory boards for several Mississauga-area organizations, rose to national and international prominence just one year after becoming the city’s fifth mayor, in 1978. 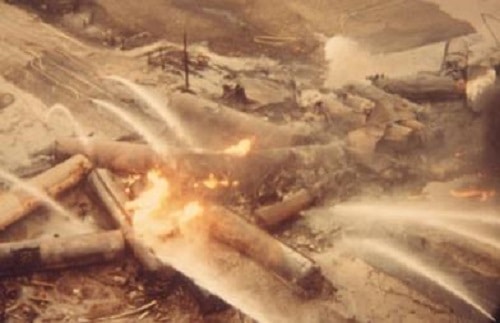 Emergency crews work to clean up in the wake of the 1979 train derailment. (Photo: Wikipedia)

In the days and weeks following the Mississauga train derailment of November 1979, you couldn’t turn on a TV anywhere without seeing McCallion, then 58, speaking to Mississaugans, Canadians and the world about the cleanup efforts and evacuation that forced some 200,000 people from their homes, some for as long as a week or so.

Many described her as a reassuring presence during that time. The evacuation was, at the time, the largest peacetime evacuation ever in North America. That distinction now belongs to New Orleans in the wake of Hurricane Katrina in 2005.

Exhibit organizers say community groups and businesses worked together to create the exhibit, which is funded in part by Community Foundation of Mississauga.