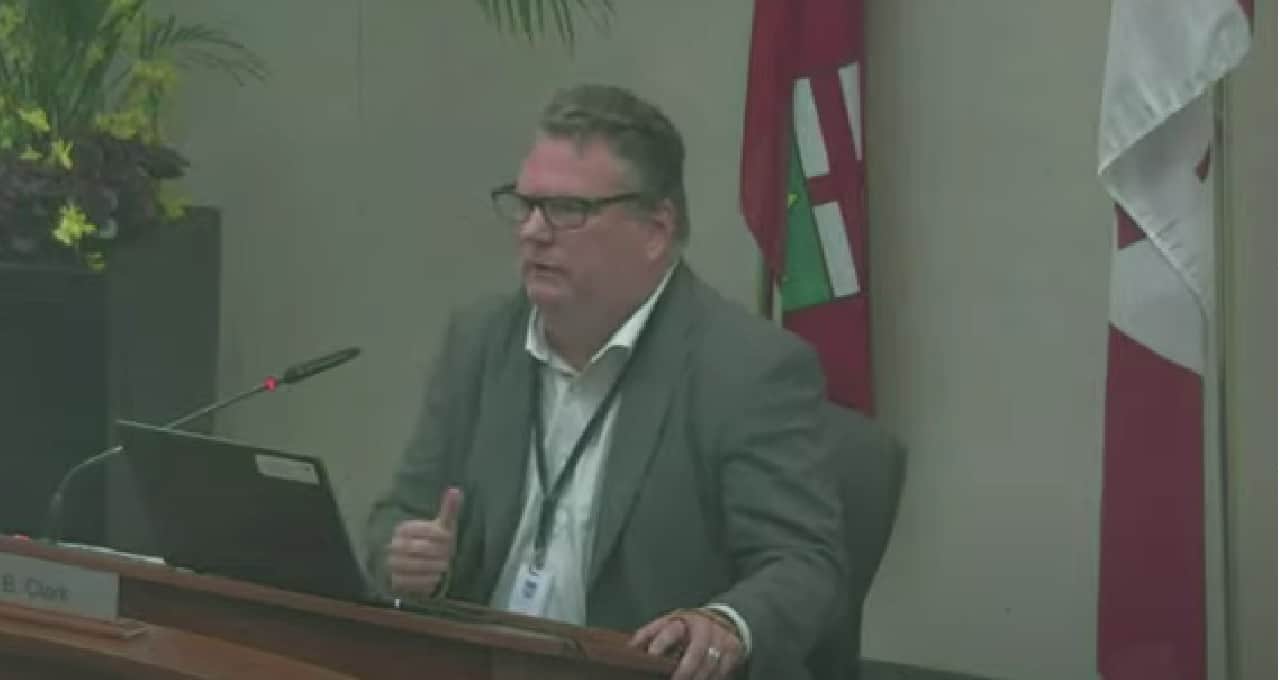 Hamilton Ward 9 Coun. Brad Clark asked for order 11 times, then had the gallery cleared after interruptions from unvaccinated city employees and their supporters on Thursday.

Clark, who was chairing a general issues committee meeting in his role of deputy mayor, also expressed disappointment that Ward 7 Coun. Esther Pauls would “disparage” other elected officials for how they have voted in regard to the sensitive public health issue of COVID-19 vaccination. Pauls is the only active councillor who voted against adopting the mandatory vaccine verification policy when it passed in January, while Hamilton was taking the brunt of the fifth wave of the pandemic.

The policy is still in place due to a deadlocked 6-6 vote on April 27. Even though Clark had asked councillors to stay on-point, Pauls veered into asking “one of the six” to change their mind.

“I know people are incredibly passionate on both sides of this equation, and I don’t fault six councillors on either side making a decision,” Clark said. “It was an informed decision. They had lots of evidence before them, and made the decision on what was before them at the time.

“We should never — never — disparage our council colleagues for making a decision that based on their research, their understanding of the issue or their personal feelings on the issue. That’s what we get paid to do. From time to time, we disagree with each other, but that is democracy. But let’s refrain from disparaging our colleagues and our staff.

“I’m hopeful that given the changes we have (with local COVID-19 activity decreasing), we may have a change, but I will not disparage anyone for their vote.”

Mayor Fred Eisenberger also said he thought “nine times over” about raising a point of privilege while Pauls was  speaking.

Thursday actually marked the first time in several weeks that the public health unit’s COVID-19 dashboard has listed local transmission status “as high and stable,” instead of increasing. That information was posted around 12 noon, during the meeting.

“Things have changed, and they’ve charged largely because people got vaccinated,” Eisenberger said. “And I will continue to speak on behalf of the vast majority of our population that did the right thing for the greater benefit of everyone.”

The possibility of termination if they are not vaccinated by Oct. 1 still affects about 230 employees in a workforce of over 7,500 people. That is less than half as many as the roughly 500 employees who were not fully vaccinated in January. After order was restored on Thursday, councillors agreed unanimously that they will revisit it at a full council meeting on Aug. 19.

The actual agenda item  was the estimated cost to taxpayers f the city follows through on terminating staff who are not vaccinated against COVID-19. That is estimated at $2.8 million to $7.4 million, human resources executive director Lora Fontana explained in a presentation.

That matter is currently in arbitration after the Canadian Union of Public Employees (CUPE) local 5167 and the Amalgamated Transit Union (ATU) filed policy grievances. The city also has partnerships with two other unions, and non-union employees are also affected.

The cost-estimate piece drew onlookers holding signs and flags containing messages such as “My dad is still essential,” “I will not be coerced” and and “F*ck Your Vaccine.” Horn-honking — a tactic used by many aligned with the anti-democracy, anti-public health protest self-dubbed the “Freedom Convoy” — from motorists passing by City Hall was also picked up by the microphones inside council chambers.

“I hope you will respect us, and we will get through this together,” Pauls told the onlookers before she started speaking.

Later she apologized for them. 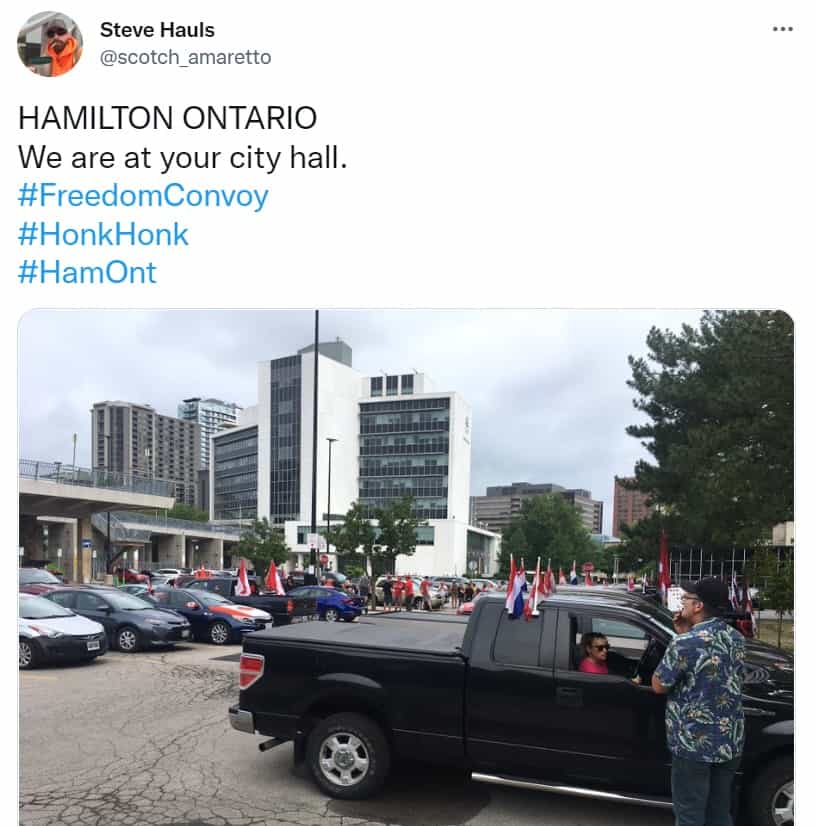 Clark had to give Pauls extra time to finish her second round of questions to Fontana, due to her having to pause or talk over the cheering of onlookers. He also warned the Central Mountain councillor about staying on-point.

Clark had asked councillors to limit questions and comments to the cost-estimate report Fontana was presenting.

Despite that, Pauls made pleas to councillors about people “who are worried about how they’re going to pay their mortgage.” She also asked Fontana whether vaccine verification is causing employees to leave the City of Hamilton “for better-paying jobs or taking early retirement,”  and claimed the policy was responsible for worker shortages at the city.

The five-page report says the estimate drew on both Employment Standards Act requirements as well as common law requirements. That was why two different figures were provided. The report says the city anticipates that the potential cost would be closer to $2.8 million, the lower of the two figures.

Pauls, using a pocket calculator, claimed the cost would be in the $5-million range. But she did not explain her math to Fontana.

“It is a very fluid process,” Fontana told councillors.

Pauls described the estimate as “guessing.”

Clark corrected her description: “Our staff are estimating — based on their professional experience.”

Onlookers yelled “censorship” at Clark at one point. He replied, “It’s not censorship, it’s respect for the decorum and the rules we have in this workplace — just like in your workplace.”

Clark asked for decorum at least five times before giving his “last warning” at 11:43 a.m.. Exactly a half-hour later, when jeering broke out after Ward 8 Coun. John-Paul Danko used the term “antivaxxers,” he ordered the gallery cleared.

“I’m not an anti-vaxxer — I’m vaccine-hesitant, stop using those labels!” a male voice shouted before the meeting feed went to a pause screen.

Pauls said, “I apologize for those people,” after the meeting resumed. Despite Clark’s prior instruction to stay on-point, she also addressed Danko directly, and later used a sports analogy in describing how councillors have approached local health protections during the worst global pandemic that the world has seen in a century.

“I ask one of the six that voted to terminate (unvaccinated employees) to reconsider because we’re at the last stage,” Pauls said. “It’s just like the last inning of a baseball game. Let’s think clearly.”

Clark and Couns. Brenda Johnson (10), Arlene VanderBeek (13) and Terry Whitehead (14) were not present for that vote three months ago.

Whitehead, alongside Pauls, did vote against the policy in January.  He is currently on a medical leave.

So far, the city has spent about $93,000 in legal costs during the arbitration matter brought by CUPE 5167.

The next dates for city and CUPE counsel to meet with arbitrator Jesse Nyman are on Sept. 23 and 30.