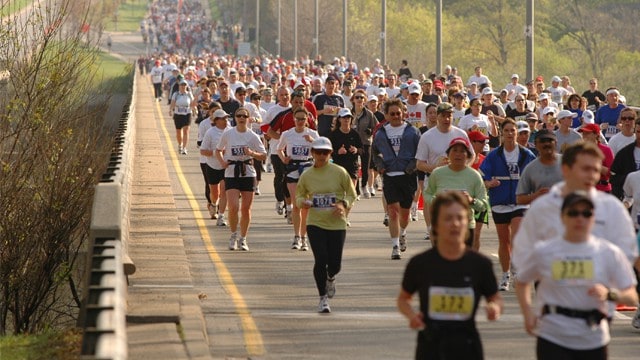 “Marathon” is a hard word to hear right now, given the recent terrorist attacks in Boston. On Monday, excited runners and spectators converged upon the legendary run’s finish line, expecting to happily finish or watch loved ones finish the iconic race. It’s horrible to think of all the people who were lost or grievously injured in the attack, but it’s also important to remember the best way to honor those people is to just keep running and attending large (and small) scale runs. Marathons are exceptional challenges that bring people together. They celebrate talent, athleticism and community – and the Mississauga Marathon is no different.

So while some runners and potential spectators might be a little wary, they should take comfort in the fact that, despite increased security at both the Mississauga and upcoming Toronto marathon, the threat of an attack in Canada is minimal (http://globalnews.ca/news/485763/public-safety-minister-vic-toews-condemns-boston-marathon-attacks/).

That said, Mississauga Marathon organizers Landmark Sport Group are meeting with Peel Police this Thursday to discuss unique or additional security measures that might be implemented at the event, which is set to run from May 4-5. Insauga.com will have more information on what runners and spectators can expect once the new security information becomes available.

For those who haven’t let the recent tragedy temper their enthusiasm for marathons, the Mississauga Marathon is an excellent opportunity for runners to stretch their hamstrings on fun 2ks or go all the way with the run’s scenic full marathon (42.2 kilometers). Oh – and it’s the marathon’s 10th anniversary, so there’s even more reason to show up and, if you’re not running, cheer on the brave souls braving the dicey spring weather.

“It [the Mississauga Marathon] was once known as the fastest growing marathon in Canada,” says Krystal Duz, an event coordinator with Landmark Sport Group. “We had 5,000 runners in our first year [in 2004] and we have over 10,000 runners now.”

The full marathon begins at Square One (City Centre Blvd. and Robert Speck, to be exact) and takes runners down Burnhamthorpe and Mississauga Road and Winston Churchill and Lakeshore Blvd., ending at Lakeshore’s Promenade Park (where all the event’s runs finish).

But the event won’t be all about running. Participants and spectators can also expect live entertainment, with GTA band Boomerang Band performing at Promenade Park on Saturday night from 6-9 pm and Toronto cover band Jen and the Men performing at the same location on Sunday between 8:30 am and 2 pm. There will also be an award ceremony on Sunday, where the fastest runners will be recognized for their prowess and given prizes (which have yet to be revealed).

For the runners, organizers are intent on creating a fun and motivating atmosphere.

“We try to get cheer stations along the routes and we’re getting [local radio station Fresh FM] to play music along the route. We also have aid stations every two kilometers with port-a-potties and water and Gatorade. Those are staffed by volunteers who are there to cheer on the runners as well,” says Duz.

The marathon is also a good opportunity for runners to raise money for local charities, as organizers have partnered with Scotiabank for the Scotiabank Charity Challenge.

Runners can click here (http://www.mississaugamarathon.com/charities.shtml) to learn how to fundraise for any of the 23 participating charitable organizations (which include United Way, the Mississauga Food Bank, and SickKids, to name a few).

And for Hazel-philes who believe no event is complete without the iconic mayor making an appearance, they’ll be able to see the city’s main matriarch at the starting point of both the main marathon and the Starbucks Coffee Hazel 5k (named after Hazel herself).

For those going to support friends or family running in one or more of the many races, Duz says the best vantage point is the finish line.

“Spectators can [line up] along the route, but I would recommend the finish line. Watching someone cross the finish line is something I can’t even describe,” she says.

And as to why Mississauga is the home of such a fast-growing marathon, Duz credits the city’s aesthetics.

“It’s one of the most beautiful routes.”

For more information on how to register and where to pick up race kits, visit http://www.mississaugamarathon.com/default.shtml

Updated security and road closure information will be added to this story as it becomes available.

Ben McCarty, Race Director of the Mississauga Marathon stated today, “We have met with Peel Regional Police, Peel Regional Paramedic Services and City of Mississauga officials in our ongoing effort to carefully review safety and emergency response plans to make sure that every aspect is considered to ensure the safety of participants, volunteers, spectators and the community.”

Elliott Kerr, President of Landmark Sport Group the organizers of the Mississauga Marathon adds, “We are deeply saddened by the tragedy at the Boston Marathon but have seen a powerful resolve to not let these horrific events rob us of our love for running whether it is Mississauga, Toronto, Chicago, London, New York or Boston.  At a time like this we are reminded of the spirit of humanity and resilience of our communities. We are proud of the passion and dedication of our runners to pursue their goals and follow their dreams.  The Mississauga Marathon will be a testament to the power within and that no matter the obstacle, we will prevail.”