Cooksville is currently undergoing a revitalization project known as Vision Cooksville that was launched by the city of Mississauga—together with residents’ input—in order to develop and plan for “a new Cooksville” that would be a more transit-oriented community suitable for pedestrian traffic. Ideally, it’ll transform Cooksville into the next destination hot spot, rather than just a place people in Mississauga pass through on their way to greener pastures like Port Credit.

But whatever the city feels like doing with its neighbourhoods, it is always going to run into certain interests, like the development industry. Their interests lie in building more high rise condominium development in areas like Cooksville where they see consumer demand. The Cooksville area also happens to be right alongside the Hurontario LRT corridor, so it’s no surprise that condo development applications have come forward to Mississauga’s Planning and Development Committee (PDC) for an area like Cooksville.

One of those applications presented to Mississauga City Council this week was from Eminence Living Inc. They requested the construction of a 28-storey, 282 unit apartment building on 45 Agnes Street in one of the quieter areas of the Cooksville neighbourhood just behind T.L. Kennedy Secondary School. As you can see below, this piece of land has been sitting pretty much empty and untouched for quite a number of years:

What Eminence is requesting to build is what has been dubbed “The Maze,” based on these conceptual artistic renderings. Judging from the building’s exterior design, one can most likely see the reasoning behind that particular moniker. 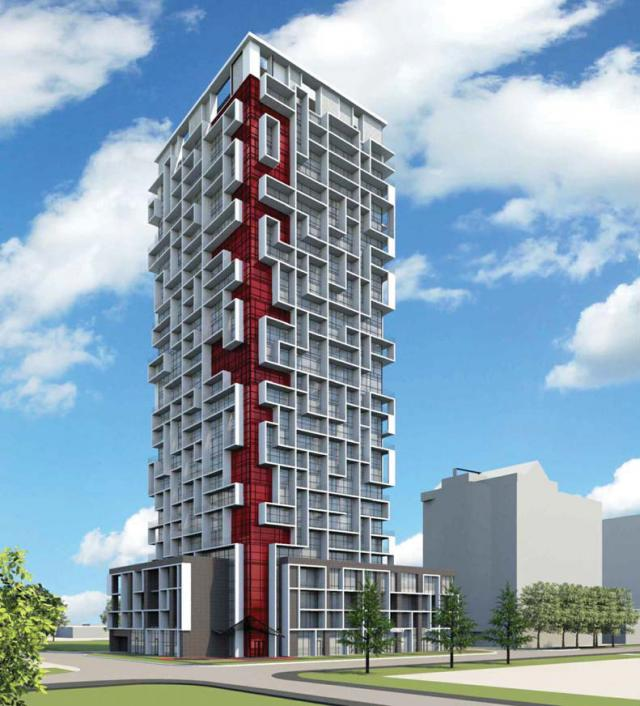 “The Maze” by Eminence Living Inc. 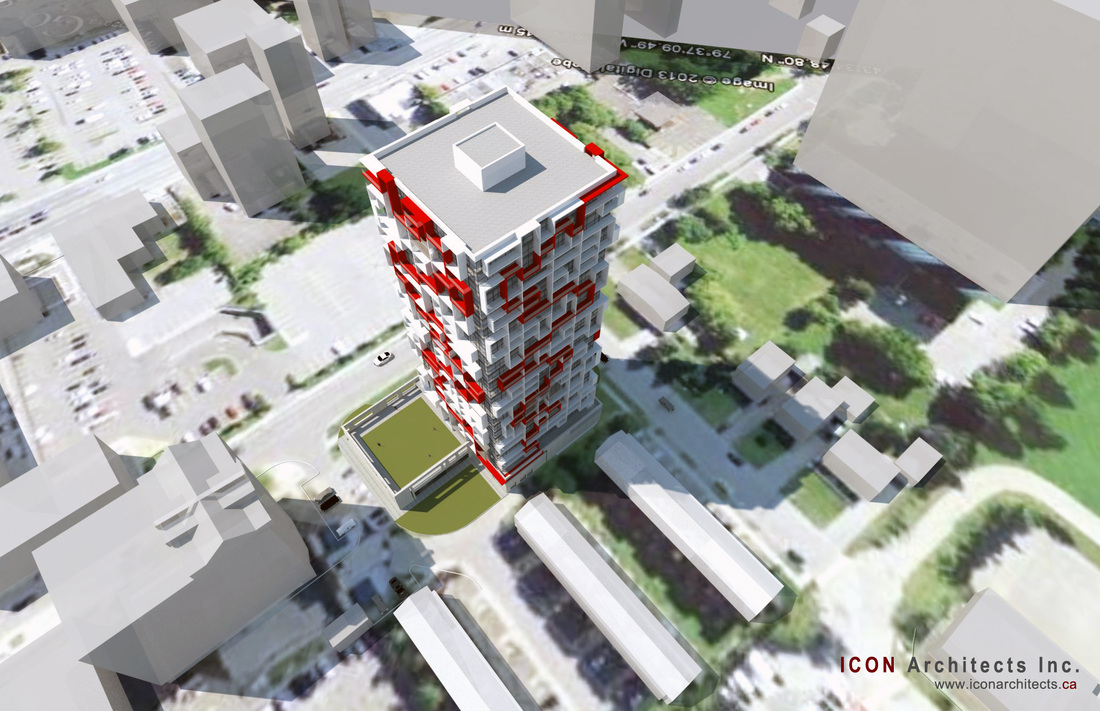 Another view of building with T.L Kennedy Secondary School shown behind property.

The Corporate Report presented to PDC explained that the land was originally zoned for a 25 storey high rise, so an amendment would be required to allow a 28 storey building as per Eminence’s application. A public meeting was held in late June of 2014 to present the application and hear residents’ concerns. But it seems some of those concerns needed some further hashing out as some people came forward at PDC to present certain issues they had with this development.

A man who identified himself Mohammed, who lives in one of the adjacent townhomes, raised concerns about safety and the presence of unsavoury people. He seemed to indicate that renters were more likely to do drugs and commit crimes in the neighbourhood than condo owners. Mohammed requested confirmation that “The Maze” was primarily going to be occupied by condo owners and not renters. From the looks of things, Mohammed’s concerns were based primarily on what kind of people would move in, rather than anything about the building itself.

Another woman who lived in one of the small houses on the other side of Cook Street raised concerns about the shadow of the building blocking the sunlight to her home. If you look at the conceptual drawings, you do see a rather large shadow casting itself over some of the smaller homes across the way. Some planners in the meeting answered that the curvature of the building would not affect existing residents’ access to sunlight.

Finally, a man raised the issue that people usually hear about when it comes to these kinds of developments: traffic concerns in the area. Staff answered that a traffic study was conducted and they concluded that the building does conform to the anticipated higher forms of alternative transportation modes that were coming into the Cooksville area, like LRT and increased MiWay services. The modified plan that Eminence presented does include up to five levels of underground parking, rather than slapping up more parking lots on the surface. There were also plans to put in temporary access points and realignments at 25 and 43 Agnes St during the construction period in case people were indeed worried about not being able to drive back into their homes.

Ward 7 Councillor Nando Iannicca responded to his residents’ remarks with his usual eloquence.

“If you’re concerned about this building coming into Cooksville today, please move out now,” said Iannicca. “Some people actually don’t plan to move in with cars; some may be moving in with no car at all because they would rather take transit and we’re looking to build a city.”

Admitting that Cooksville is getting a bit “old and tired,” the councillor thanked his colleagues for putting billions of dollars into the area. Finally, Iannicca also rejected the premise that renters tend to be more troublesome than condo owners, saying he had more break-ins once he moved into a detached home than when he was living in a condo.

What I was hearing was reminiscent of the gentrification argument you hear about in various examples of urban planning: an older neighbourhood that has been stagnant for years is suddenly receiving money and development, leaving existing residents feeling like they’re being pushed out in favour of a “different kind of resident.” Those with vested interests would rather have the area set on the journey to “great city building.”

You can read a little more on the downsides of gentrification here.

One of the principles of the Vision Cooksville report was to create a distinctive Cooksville identity. You might be asking yourself how does this condo building go about in doing that. Since this structure is called “The Maze” and its exterior resembles one as well, is there a metaphorical implication that, since Cooksville used to be a crossroads of sorts during earlier incarnations, The Maze means that there are many directions Cooksville can lead one to? A maze usually means confusion in going from Point A to Point B; I hope this building doesn’t reflect that Cooksville is somehow directionless!

I was surprised that at the end of the Iannicca soliloquy that there was little to no objectionable dissent from the people who attended PDC that evening, and there were at least over 30 people from the surrounding area in attendance. I wasn’t expecting residents to realistically change council’s mind from going ahead with this, but if you hear a politician basically say you that you should move out of your neighbourhood if you don’t like a building being there, well, some people might interpret those as fighting words.

In the end, city council approved of the application by a vote of 10 to one, with Ward 6 Councillor Ron Starr being the lone dissenter. Starr didn’t offer up any public speech as to why he voted no; the only question he asked was the identity of the primary owners of the land, who then walked up and identified themselves. Starr responded with a simple acknowledgement, nothing more. Starr told Insauga via email that he was not comfortable with the overall project, hence his reasoning for voting no.

One more point about Iannicca: It may sound to an average person that the person elected to represent and serve you doesn’t sound like he has time for you because he’s busy “building a city.” If Councillor Iannicca is gambling on having new residents that would end up supporting him for the great stuff he’s doing to revitalize Cooksville, that’s a big gamble to bank your political career on. Next year he is either going to have to run for reelection or retire, and he doesn’t sound like he’s doing the latter anytime soon.

Will Ward 7 residents remember this meeting and how seemingly Nando dismissed them? Or will this be forgotten?

Only time will tell whether he takes a shellacking at the polls.