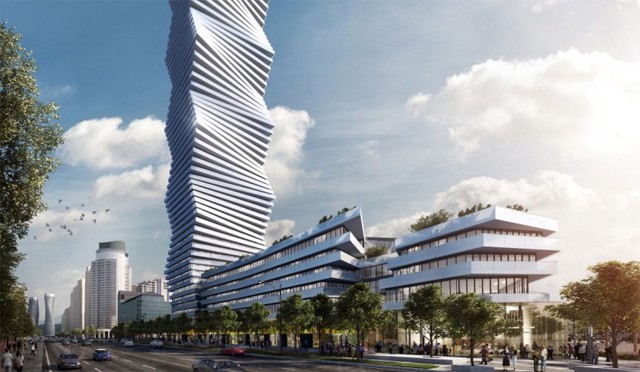 For the past few years, the Absolute Marilyn Monroe towers have been the stars of the Mississauga skyline. Curvaceous and sleek, they’ve imbued the city with unmatched visual vibrancy.

Now, it looks like they’re going to get some stylish company in the form of M City’s flagship building–a 60-storey tower that boasts a distinctly modern, zig zag-style look. The tower, the first of 10 proposed by developers, will be Mississauga’s tallest building, beating out the 56-storey Absolute tower by a fine four-storey margin.

You can see a mockup in the cover photo (courtesy of Brick Visuals) and it’s absolutely stunning–a standout architectural vision that’s supremely eye-catching and ultra-modern.

M City is the brainchild of the Rogers Real Estate Development Ltd., a private holding company owned by the Rogers family. It’s a massive $1.5 billion condo community that’s set to take shape right in the City Centre core.
It will be a a 10-tower, 15-acre, 4.3 million sq. ft. community that will feature over two acres of public parkland (we all know green space is a big deal).

You can see another mockup of the space (created in late 2016) below: The community is designed to fit into the city’s lofty Downtown 21 plan and is, for all intents and purposes, intended to further the city’s transformation from a semi-urban bedroom community to a richer, denser urban space.

Although the development was just announced last fall, it’s been in the works since 2007. Almost 10 years ago, Rogers Real Estate called on Urban Capital to help transform the long-held family asset (the Rogers family purchased the land in the 60s) into what they’re calling a “legacy community.”

So, how will it look? The newly announced tower is being designed by CORE Architects and it’s slated to “redefine Mississauga’s skyline and set the tone for the future phases.” According to the M City website, the amenity program developed by Cecconi-Simone for the building will feature a 14,000 square foot amenity terrace with an outdoor pool and ice skating rink.

The project should break ground soon–possibly by the end of the year.

If you can see yourself calling this development home, click here.