Striking Workers Urge People to Stay Away From Service Ontario 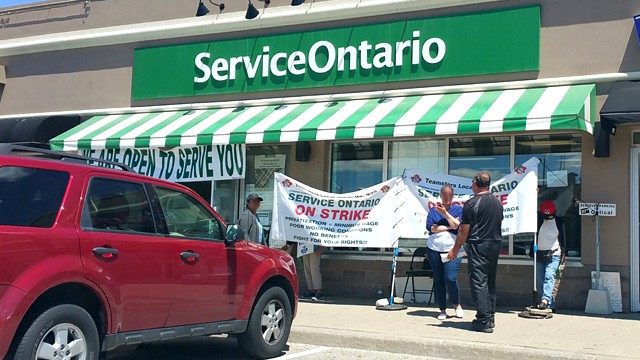 It looks like one of the privately operated offices for Service Ontario hasn’t been doing much to serve its employees, according to an article from the Mississauga News.

Six of its workers (making up half of the total staff) have been on strike since last week and recently set up a picket line outside the office, which is located at 5035 Hurontario St. near Eglinton Avenue.

Citizens trying to use the office’s services, such as renew their driver’s licenses and plate stickers, are being urged by strikers to go elsewhere.

The cause of the strike is due to lowered wages and poor working conditions.

When the office was originally operated by the provincial government, the workers were making about $20 an hour and had a pension and benefits. After the office was privatized, they began receiving minimum wage and all benefits were removed.

Labour talks are at a standstill. Wayne Franklin, spokesperson for the workers’ union, told The News that it’s been a difficult process.

He said the union is looking for a decent wage for the workers, some of them being single parents. The union’s last proposal was to increase payment from minimum wage to $13 per hour, but did not respond to any benefit demands.

The office is currently still open, with replacement workers taking the strikers’ places.

Meanwhile, an event called “The Rally to Save Our Service Ontario Centre” was planned for today from 12 to 1 p.m. outside the last government-run Service Ontario office in Mississauga, located at Westdale Mall.