Stories of Prison Breaks from Brampton’s Most Notorious Jail 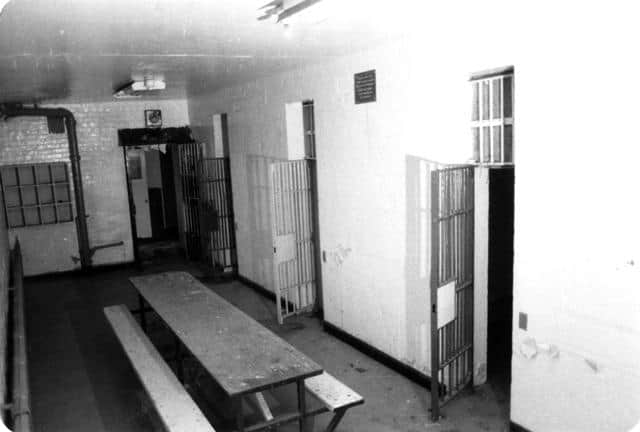 One of Brampton’s most interesting landmarks–a historical PAMA building that now acts as a museum–was once a decrepit and dilapidated jail that functioned as both a prison for dangerous offenders convicted of murder and down-on-their-luck transients who literally had nowhere else to go.

According to PAMA, both men and women served time in the prison for petty crimes and typically remained incarcerated there for less than two years.

The jail, which opened in January of 1867, remained a prison until 1977 and was converted into a museum in 1986 after being condemned in the early 80s. When the prison first opened, it didn’t have any electricity or running water and inmates had to sleep on straw mattresses.

Although the prison did receive some upgrades prior to closing (lights, toilets and a TV), it was infamous for its constant disrepair.

According to an article penned by Julie Middleton, the prison was prone to overcrowding and sorely lacked in proper plumbing (buckets were used in place of proper toilets).

In fact, Huey Newton, a co-founder of black rights group the Black Panthers, said that the prison was worse than any jail he’d seen in Cuba. He served five days in the facility in 1977 after being arrested upon leaving Cuba for charges in the U.S.

The prison was relatively small, boasting six modestly-sized cells. Although it did house some more prolific offenders (such as Newton), it was more of a transitional home of sorts for extremely vulnerable members of the growing Peel community. In terms of more notorious prisoners, the facility was the site of the 1909 execution of Stefan Swyryda, a Mississauga man convicted of murdering a 17-year-old European migrant worker during the course of what may have been a robbery.

According to Middleton’s article, inmates worked hard labour while serving time, helping in the kitchen and laundry room and breaking down rocks for roads. Although the conditions were brutal, the jail was seen, by some, as a preferable alternative to sleeping on the icy streets of the southern Ontario city. Although the building was far from adequate, it was heated during the colder months and inmates were provided for in terms of meals and medical attention.

For many people in need, the jail was the only option for shelter when temperatures dropped in the winter–especially since the facility preceded local poorhouses/homeless shelters (in fact, Middleton’s piece points out that Peel didn’t even have a hospital for some time).

But while some people were anxious to get into the prison because a tiny cell without a toilet was preferable to a night on the street in the dead of winter, others were desperate to get out.

According to a newspaper clipping from Nov. 19, 1906 (provided by PAMA), two prisoners–both charged with attempted murder–managed to escape the dilapidated structure.

Robert McDonald (known as “Scotty”) had been in prison for “some months” awaiting trial for a “murderous attack” on another man. The second prisoner, George Abbott, was recently imprisoned for an attempted murder at a home between Cooksville and Streetsville.

According to the article, the men were eating dinner in the south corridor prior to their escape. Between the room they were in and the jail yard, there were three doors, “two of which were left unlocked as they passed through; the third, an iron door locking with a spring lock, was not securely fastened.”

After the turnkey gave the men their dinner and left to eat his own, the unsupervised prisoners took advantage of the situation. When they opened the spring door and entered the yard, they noticed that a pump had been left unsecured. The pump and sucker, which were about 30 feet long, offered the men an opportunity to easily ascend the 20 foot wall.

An award for $50 was offered for the return of the escapees.

In 1948, other prisoners attempted to flee the confines of the jail.

According to a newspaper clipping provided by PAMA, two convicted “shopbreakers” were caught when “the noise of the bars being sawed was detected before the getaway was fried.”

The unsuccessful prospective escape artists were Edward Everson and Roderick Morissette, two men who had just been convicted of breaking and entering and theft.

Although their escape attempt seems clumsy (if only for its incredible obviousness), they actually did make some headway. According to the article, one bar of the cell was completely sawed through and several others were partially cut. The prison’s governor later found hacksaws and other blades that had been smuggled into the jail. The two men were handcuffed together when they were brought forward for sentencing and guards were placed at all courtroom entrances.

In May of 1951, three prisoners managed to escape by overpowering a turnkey named Ted Hiscock. According to the newspaper clipping, Jack Neville, Jack Rowen and Herbert Baird, “dashed down Brampton’s main street, stole two trucks, abandoned the second truck and tramped through four miles of bush before falling exhausted into the arms of Provincial Police ten miles east of here.”

So while it seems the prison was good enough for some, others couldn’t wait to get out–even if their frantic journeys led them right back into the police’s arms.