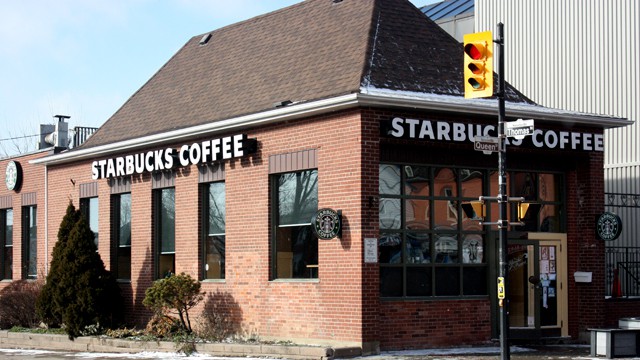 Although restaurants can start opening their patios on June 24, it does appear that some quick-service hotspots will not be reopening as physical distancing restriction are lifted.

Those who love gourmet coffee might be sad to hear that the Starbucks near South Common Mall (2116 Burnhamthorpe Rd. W.) appears to be closed for good.

The store, which no longer boasts any Starbucks signage, appears to have been removed from the location finder on the official Starbucks website.

While it’s not clear if the permanent closure is elated to the COVID-19 pandemic, Starbucks–which is slowly rolling out dine-in and patio service across Canada where it’s been permitted to do so–has announced plans to shutter dozens of locations in Canada.

Earlier this month, the Canadian Press learned that the Seattle-based chain is restructuring its company-operated business in Canada under a two-year plan. The brand is planning to close up to 200 coffee shops across Canada as it responds to changes in consumer habits in the COVID-19 pandemic.

“As our business recovery continues, we are now laying the foundation for a more transformational phase — ‘restore and build resilience’ — enabling us to accelerate the transformation of our business,” the company explained to shareholders.

Starbucks said it typically closes about 100 company-operated stores each year in North America, mainly due to leases expiring. The latest round of closures would surpass that figure in Canada alone.

Some of the Canadian stores up for closure will be “repositioned,” the company said, which suggests they could either move to a new area or change format.

The company has been experimenting with locations that are pick-up only coffee shops. The first Canadian Starbucks store using the new format launched in January in Toronto.

With files from David Friend, The Canadian Press