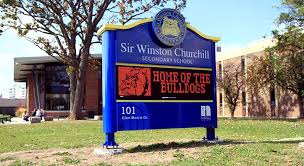 Hundreds of students from Sir Winston Churchill High School in St. Catharines walked out of school Friday for a rally to protest sexual violence at their school.

With signs saying, ‘Why won’t you Protect me,’ No means No,’ ‘Silence is Violence’ and ‘End Rape Culture,’ the students were protesting several acts of sexual assault they say were not reported on.

Anny Jean Brumeel, one of the organizers of the event, said the student complaints have not been taken seriously “until now” and added that she reported an incident herself to school principal Ann Gilmore.

A second protest happened that afternoon at Thorold Secondary School.