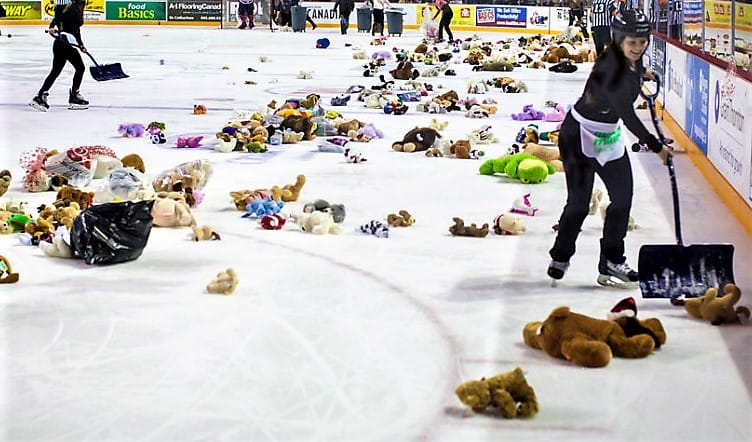 They got the shovels out, scooping up the stuffed toys during a previous year of the Niagara IceDogs Teddy Bear Toss promotion. All the collected bears will go to young patients at Niagara hospitals. (Photo: Niagara IceDogs)

Oddly, it was raining harder inside the Meridian Centre on Saturday night (November 26) than it was outside the arena.

While the outside rain wouldn’t start until just before midnight, it was raining teddy bears inside the St. Catharines arena at 12:09 of the first period when Niagara IceDogs player Kevin He scored the first goal in a 6-5 win over the North Bay Battalion.

Suddenly, the ice surface was covered with the stuffed toys as part of the team’s annual Teddy Bear Toss. 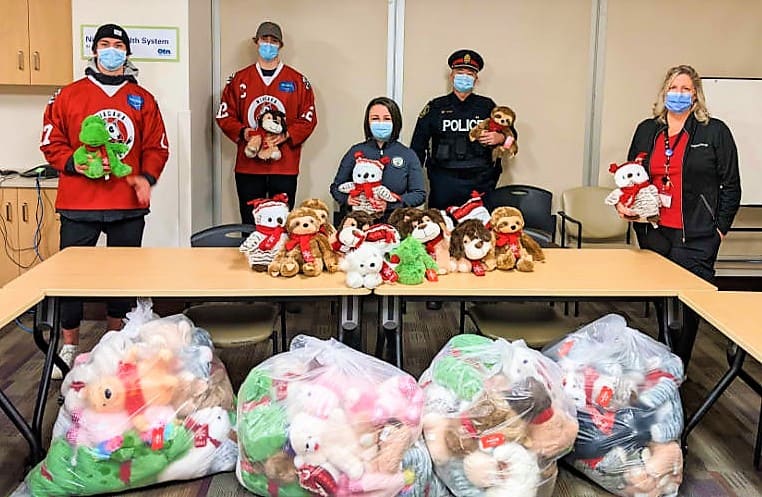 During the 2021-22 season after the Teddy Bear Toss, IceDogs players Cameron Butler and
Cameron Peters made a special delivery to Niagara Health.

While the team hasn’t announced the final teddy bear count, it is expected to be in the neighbourhood of 3,000 – all of which will go to the Niagara Health’s St. Catharines General Hospital sometime this week.

Prior to the game, the team announced, “Bring as many teddy bears as you would like, and toss them on the ice when the IceDogs score their first goal of the game. All bears collected will be donated to Victim Services and the Niagara Health System.”

Here’s what the 2018 Niagara IceDogs Teddy Bear Toss looked like as it happened.