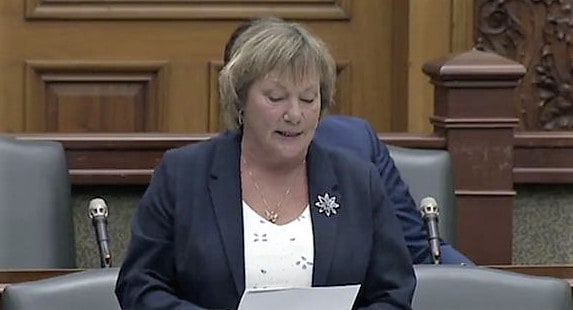 St. Catharines MPP Jennie Stevens held the Ford government’s feet to the fire during a spirited back-and-forth about the lack of support for autistic children in Ontario at Queen’s Park.

One of the first acts of the Ford government after winning the June 2018 election were cuts to autistic programs, a move that caused outrage from the families affected and others who saw it as an attack directed at the most vulnerable members of the community.

The government’s ongoing response has been that they will be expanding services and doubling the funding under their forthcoming new Ontario Autism Program.

“Families of children with autism are more worried than ever after the government admitted they won’t have a fully functioning Ontario Autism Program until 2022. That’s not governing, that’s yet another election promise. Ontario needs a well-funded and truly needs-based program and (autistic) children can’t wait for it.”

When Conservative Jeremy Roberts, Parliamentary Assistant to the Minister of Community and Social Services, replied, talking about the work and funding that’s going into the new program, Stevens stepped it up.

“I’d like to see the government invest in the 50,000 children that have autism that have been waiting for (programs),” she said, calling out what many see as a government stall.

“Families who have children with autism are now more worried than ever before after the government admitted they wouldn’t have a fully functioning Ontario Autism Program until 2022. People in Niagara are tired of hearing election promises to fix problems in 2024 or cynical policy reversals for a vote grab while we still have big gaps for families in Ontario.”

She finally asked, “Premier, will you fix the problem and finally be transparent on wait-times and timelines for families (with autistic children)?”

At that point, all Roberts could do was throw it back to autism waiting lists under the previous Kathleen Wynne government.