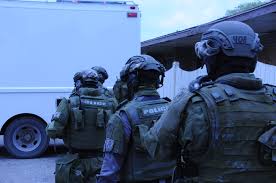 A St. Catharines man who allegedly sexual assaulted an underage youth in Burlington was charged on Friday.

Police say the victim was lured and groomed online before the two met in Edmonton, where she was sexually assaulted with photos and video of the offences posted online later.

The alleged offences, which occurred over a period of several years from approximately 2012 to 2014, took place in Burlington, St. Catharines and Edmonton.

The ALERT ICE unit believes other victims in those communities exist.

He’s since been transported to Alberta and has been charged with sexual assault, assault, sexual exploitation and making child pornography.

Anderson appeared in Calgary court on May 4 and was released on bail.

The investigation, which dates back to 2018, remains ongoing.

Any potential victims, witnesses or anyone with information about this investigation is asked to call the Niagara Regional Police Service at (905)-329-8354, ext. 1009128 or anonymously at cypertip.ca.