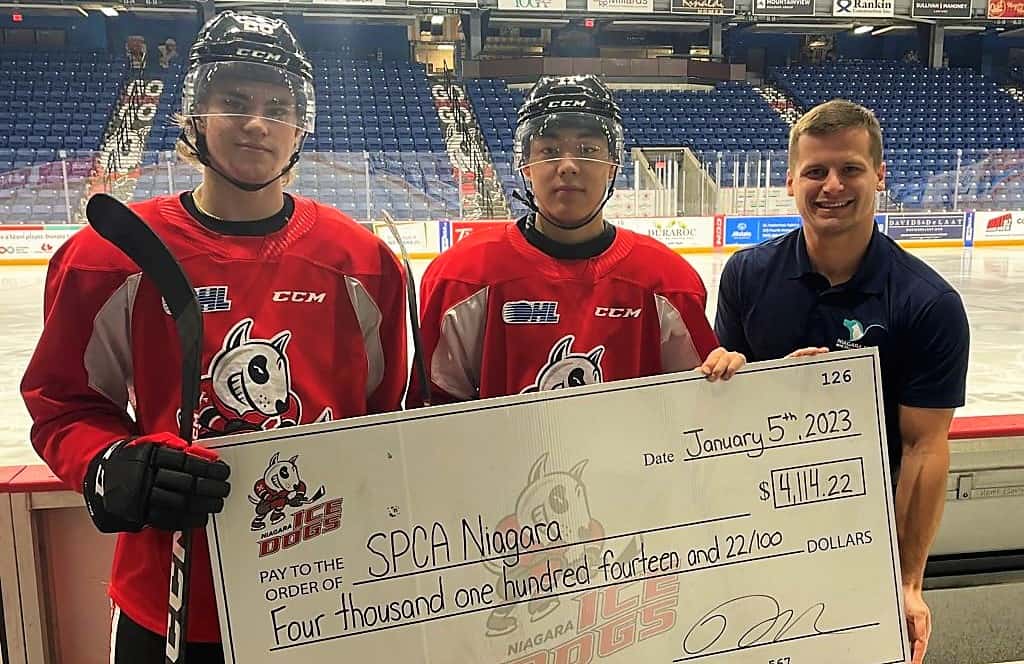 Members of the IceDogs and a rep for the Niagara SPCA hold up a cheque to the organization from proceeds during a December game. (Photo: Niagara IceDogs)

The Niagara IceDogs’ Throwback 60’s Night on December 8 saw a lot more than just bell-bottoms and tie-died t-shirts in the stands.

It was also a fundraiser for the Niagara SPCA and yesterday (January 5), the OHL hockey club presented a cheque for $4,114.22 to the animal organization.

Although the IceDogs lost a shoot-out thriller to the Kingston Frontenancs in that December game, the 4,000 fans in the stands made sure the Niagara SPCA was a winner on the night.

Proceeds were raised through specialty game-worn themed jerseys that were auctioned live post-game with the help of Luke Pasmore from Luke’s Auctions and local sports figure Rod Mawhood.

Kevin He’s jersey was a hot commodity again, selling for $775, Daniel Michaud’s sold for $525, while David Jesus and Bones both saw theirs sell for $400 each.

The game, which was dedicated to the Niagara SPCA and Humane Society to help raise funds for their programs, featured a mobile cat adoption centre in front of the box office, an SPCA information booth and a ceremonial puck drop with a director from the non-profit.

The Niagara SPCA and Humane Society is a non-profit charity that operates animal centers in Niagara Falls, Welland and Port Colborne providing shelter for homeless animals and adopting them to caring families.

Each year, the shelter’s financial resources are stretched to meet the demand for their services, fundraising endeavours and donations are vitally essential to sustain their efforts as they do not receive any government funding.

This donation from the IceDogs will allow the SPCA and Humane Society to help animals and pet owners across the Niagara Region and beyond.