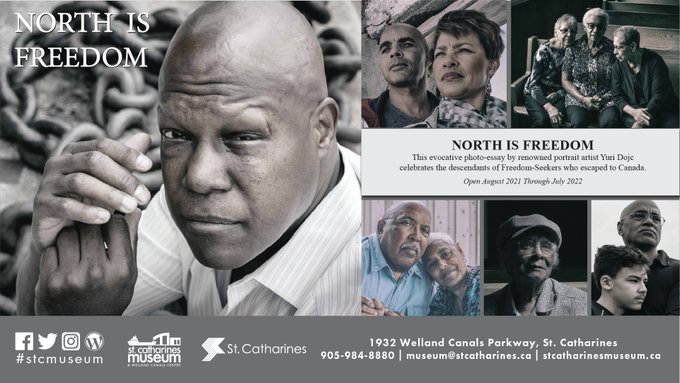 The descendants of the Freedom Seekers who fled slavery in America on the Underground Railroad to Canada in the mid-1800s will be highlighted in a special photo exhibition in the St. Catharines Museum and Welland Canals Centre starting on August 1.

The exhibit called “North is Freedom: The Legacy of the Underground Railroad” was pulled together by Canadian photographer Yuri Dojc and it celebrates the descendants of freedom seekers who escaped slavery in the United States in the years before the American Civil War.

The St. Catharines Museum and Welland Canals Centre has partnered with the Central Ontario Network for Black History (CONBH) to keep this exhibit with the local community until July 15, 2022.

Back in the days of the Underground Railroad, some 30,000 men, women and children fled north to freedom, settling from the Canadian Maritimes to as far west as the Manitoba border.

Some arrived alone, while others found their way to Canada with the help of a clandestine network of “conductors” and “stations”, known as the Underground Railroad. Many came to what is now Ontario, to places such as Windsor, Chatham, Buxton, the Niagara Peninsula (including the City of St. Catharine), Owen Sound, and larger cities like Hamilton and Toronto.

Some 150 years later, Dojc’s work features 24 images celebrating the history of descendants and their ancestors’ courage. Black and white, young and old, those highlighted are the descendants of once-enslaved Africans who have contributed to the growth of this country.

Kathleen Powell, the City’s supervisor of historical services, said, “The story of the Underground Railroad and of freedom seekers is an integral part of our community’s story and the descendants of these brave individuals have helped shape our city in so many important ways.”

She added, “We are so pleased to partner with the Central Ontario Network for Black History to host this compelling and thought-provoking exhibit featuring amazing stories of courage and perseverance.”

Once open, the exhibit will be available for viewing to all visitors to the Museum during operating hours. The St. Catharines Museum and Welland Canals Centre is open to the public seven days a week, with some adjusted hours due to COVID-19. Admission to the Museum is by donation.