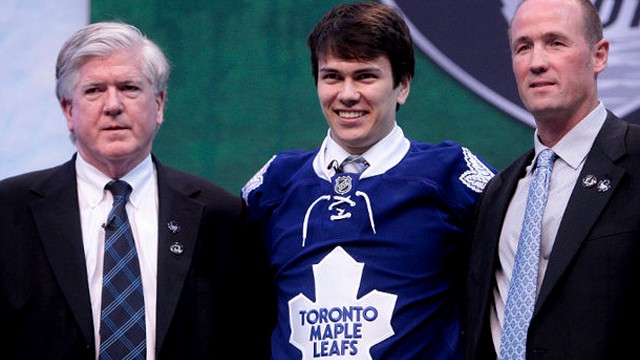 We recently caught up with Toronto Maple Leafs 2011 first round draft pick and Mississauga Steelheads captain Stuart Percy. Find out what this lifelong Leaf fan had to say about the day he got drafted, how his dad helped mold him into the player he is today and his favourite restaurant in Port Credit. And check out the Quick Facts video to see what “STUing” is all about.

Being a lifelong Leaf fan, what were the first thoughts that ran through your head once you heard the Leafs call your name at the draft?
I don’t really remember much. I remember hearing my name called and saying the team first and then saying my name and me getting up and hugging my dad and all my family. Then trying to get down there as soon as possible and up on stage. It’s kind of a moment that you think you would remember a whole lot about, but at that moment, I didn’t really remember anything.

What was your first thought when you got on stage with Burke?
It was cool. That is one thing I really remember. I got up on stage and they gave me the jersey and I asked if there was a hat. Burke said that we don’t do hats; we like to see your face for the pictures. And after he joked about it, they gave me a hat. That is something I will remember on stage at the draft.

You are a lifelong Leaf fan right?
Ya!

Now that it’s had its time to sink in, do you feel more pressure in the Steelhead change room to step it up mentally and physically?
Ya, for sure. Being the captain, I have to bring the intensity to the rink every day. I think that I have been doing a better job this year than last year.

Having been here for the past 3 years, what do you think of the fans in Mississauga?
I really like them. The fans that do come out support us, ,they are really enthusiastic, they really love the game and they love all the players. We might not get the numbers likeLondonorKitchener, but they are Mississauga fans and are great quality fans. They have been great for the 4 years that I’ve been here.

What are some of the things that you will remember the most about playing hockey in Mississauga?
The Memorial Cup sticks out the most because we hosted it and it was a great season for our team. We won the Hamilton Spectator Trophy and we unfortunately lost in the OHL final, but we went back to the Memorial Cup finals.

Who is the best hockey player you’ve played against?
I think Tyler Seguin, Taylor Hall and Kadri played in my first year in the OHL. Those guys stick out the most in the OHL. I haven’t gotten to play too much with the NHL guys, but being on the ice with Kessel, Lupul, Grabovski, those guys are special players as well.

How did it feel being on the ice with the NHLers?
They are really good! Especially for me, coming from the Memorial Cup team. After I was drafted and went to camp, you know, you realize you had a good team and we worked really well together. And then you go up there and you see how good guys really are at being a pro hockey player, so it’s really exciting to think about and hopefully, one day, I can be as good as them.

Who’s the best player you’ve ever teamed up with?
Ryan Nugent-Hopkins. I got to play with him at the under-18 Ivan Hlinka Tournament for Team Canada and the top prospects game in Toronto during my draft year. He is a very special player and everyone already saw that last year when he put up a point a game in the NHL as an 18- year old.

What’s a daily training routine for a Leaf first rounder and captain of the Steelheads?
Usually, for the guys that don’t go to high school, we are at the rink at 10am and we work out for about an hour and a half. Then we get a break and eat lunch, and we are back on the ice at 1:30 when all the high school guys come in.  We are back on the ice for a couple of hours, and then, we are back at home getting ready for the next day.

In the OHL, you get to work out hard at the beginning of the week and then play all your games on the weekend. There are long tough days, especially Monday, Tuesday and Wednesdays.

What is a reasonable timeline that you have given yourself to crack that Leaf Line-up?
You always hope to be there as soon as possible. You see guys like Jake Gardiner who steps in and plays right away. Hopefully I’ll be able to get my feet wet by making the Marlies next year and hopefully get a few good experiences in the AHL and hopefully, in 2 to 3 more years, I’ll be an NHLer.

What do you think you have to do mentally and physically to get you more ready for the big show?
Just being a pro everyday. That is one thing that I am focusing on this year. Realizing that this is my job now. I’m a hockey player. I have to do everything right to give myself the best opportunity. Steven Staios, he works in player development with the Leafs, and he has given me a lot of good advice to cover off every little aspect to give myself the best shot to make it. We are working together now, and it’s been great to work with him. Hopefully, it will also help me propel the process a little faster.

Who’s the coolest Leaf you met so far?
There are a lot of cool guys that come up and talk to me. I know Gardiner well; Coburn and Kadri, and John Michael Liles. I remember Dion Phaneuf sat with all the junior guys at camp at the Leafs opening dinner last year. I thought that was a great job, with him being the captain and talking to the young guys and making me feel welcome.

When you’re not studying or playing hockey, what do you enjoy doing?  Are you an outdoorsy person or are you more gizmos and gadgets?
I’m not a video game guy, and here inMississauga, we [as a team] usually do Tuesday cheap movie night and we are usually at the mall doing mall things and meals. I read a couple of books here and there and watch some tv.

What’s the last movie you saw?
We saw Paranornal Activity 4 on Tuesday.

Was it good?
Ya, it was like every other Paranormal Activity.

What do you like best about Mississauga?
I like everything about Mississauga. I’m by Port Credit, HWY10/Lakeshore, and it’s such a great place around there. I usually like to go for walks and eat at local restaurants. My alone time down there is peaceful and restful. As well as going out to the mall with the guys, going to movies, go-karts, Toonie Tuesday at Playdium. Overall, it’s been a great place to play hockey the past 3 years!

Any advice that you can give to a young hockey player rising up the ranks like you did?
For me, I just tried to have fun with it. At the end of the day, you just have to go out and have fun, and that is the one thing my DAD says to me when I’m going through a rough time. When I put my mind and focus on that, that’s when I get my game back.

Any advice you want to give to hockey parents?
My parents have been really great to me. My dad’s been great. One thing him and I went through was that every hockey season, since I was 9. I had to improve 5 things that I needed to add to my game. And that is one thing that I’m still doing to this day. I think that one, you should sit down with your son to try and add 5 things to their game every year, so that when they are 16-17, they will have most of the tools required to be a good hockey player.

Can I ask you what they are?
What was it…haha. This year was more the mental and emotional part of the game. This year, I have focused on being more emotionally invested in games. Sometimes, I can look too relaxed out there, and that will get me more engaged in the game and get me jumping more.