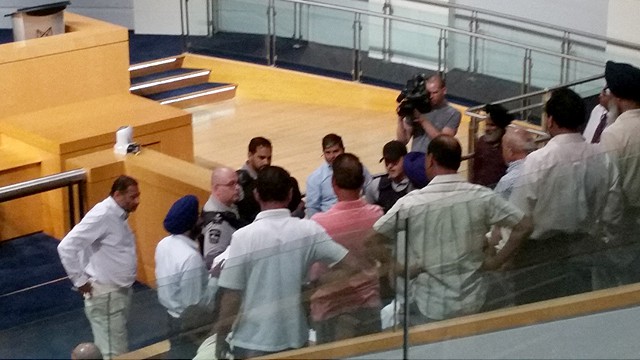 I came to the Mississauga City Council chamber this morning (June 27, 2016) to observe the latest Uber Pilot Program Committee to gather more information. Although another large contingent of gentlemen from the taxi industry filled the council chambers, I did not think things would escalate so quickly into chaos.

At one point, as I moved towards the elevator, two Peel Regional Police officers emerged from the elevator to make their way to council chambers.

The spark that lit the fuse apparently was when Chris Schafer, the TNC representative from Uber, raised concerns about having his industry undergo the same safety checks, background checks and other standards that the taxi industry has to go under, favouring different standards perhaps because of the different ways Uber operates. That prompted Karam Punian, representative for the taxi industry on PVAC (remember they are separate from this committee meeting on the pilot), to start shouting at the committee. Why should the TNCs be allowed to operate under one set of rules and the taxi drivers have to operate under another, was the underlying sentiment.

I spoke with some gentlemen who were there just observing. They were not taxi drivers, but they agreed that TNCs shouldn’t operate under special rules. How can kids who just got their driving license be allowed to drive people around for monetary compensation alongside people who have been doing it as their livelihood for decades, for an industry that dates back 100 years?, one of them said to me.

You can see from the pictures that the industry sat in council chambers as a bloc, and they all rose up to shout down the committee as Mr. Punian was approached by security to be removed at the behest of Councillor Ron Starr, the chair of the committee. That obviously didn’t sit well with the audience, and the rowdiness didn’t end after Councillor Starr called for a five minute recess, then eventually moved the meeting somewhere else to avoid the chaos that erupted. 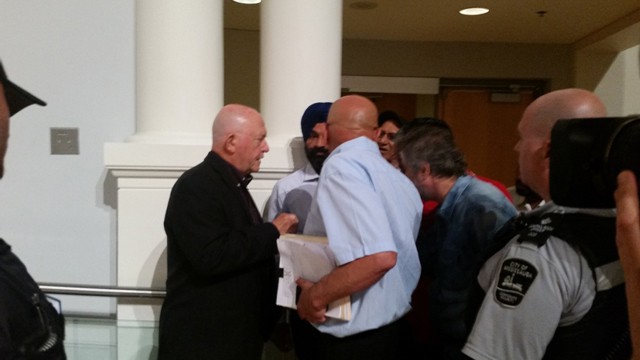 Shouts of “Bonnie Crombie, SHAME SHAME!” began emerging from the bloc of angry cabbies. I also heard some shouts of ‘criminal’ apparently implying that the entire committee, especially Mayor Crombie who is calling for the pilot for TNCs, is engaging basically in criminal behaviour by capitulating to Uber. If you’ve been inside council, there is an upper level where the elected council members emerge from their private offices. As Mayor Crombie walked upstairs to get back to her office, she was being heckled and shouted at by the people below. It really was akin to angry mobs cutting loose on the people in power. 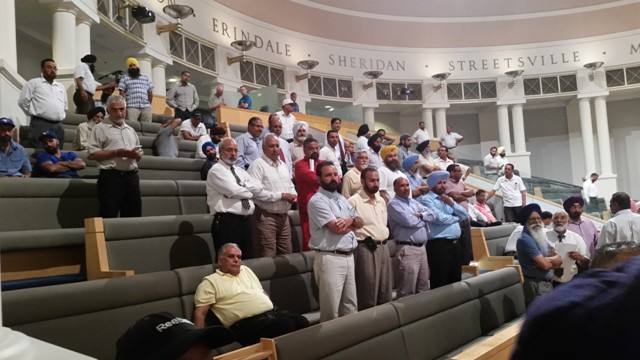 The taxi industry is adamant that TNCs cannot legitimately do the job of driving people around on the level that they’ve been doing it for years, hence it’s an illegal operation. That’s the red line they’ve drawn. Not sure where things go from here, but if things continue the way they are this won’t be the last time this committee ends in chaos.