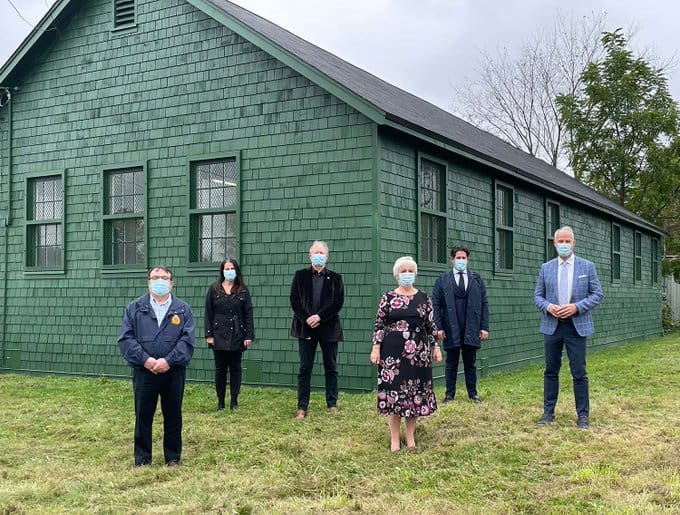 The South Field Heritage Conservation District includes the former Canteen and Stores Buildings – which just underwent a $300,000 restoration project – the No. 10 Building (home to the No. 420 Wing) and Airmen’s Park.

“In addition to being structures of historical significance, these buildings symbolize our city’s resilience and strength during our most challenging moments in time,” said Oshawa Mayor Dan Carter. “This designation honours those who bravely answered the call to duty for their country and their tremendous commitment to service.”

The former Canteen and Stores Buildings and the No. 10 Building all operated as part of the No. 20 Elementary Flight Training School (E.F.T.S.) during World War II. The Canteen Building served as the canteen for the No. 20 E.F.T.S. from 1941 to 1947, after which it was converted into a classroom and office space for the Ontario Regiment.

The Canteen Building work was completed last month and included restoration of the existing windows, siding, doors, roof and interior floor, and the rebuilding of the radio wing.

“The South Field Heritage Conservation District opens a window into Oshawa’s rich history during the Second World War when the Oshawa Executive Airport and surrounding lands served as a key training ground for Allied pilots,” said Councillor Tito-Dante Marimpietri, Ward 2 Regional and City Councillor. “Through this designation, we pay tribute to our military past by preserving this area for future generations to come.”

Highlights of the South Field Heritage Conservation District area include the three buildings which display construction methods and materials representative of construction during the Second World War, as well as several plaques, mementos and activities – including the Canadair Mark V Sabre Jet in Airmen’s Park – which have direct associations to Canada’s military and aeronautical history, in particular Canada’s contribution to the war effort through the training of Allied forces at the No. 20 E.T.F.S.

The South Field also represents an important contextual display of the Oshawa Executive Airport’s history and a historical snapshot of a different period in Oshawa’s own history.