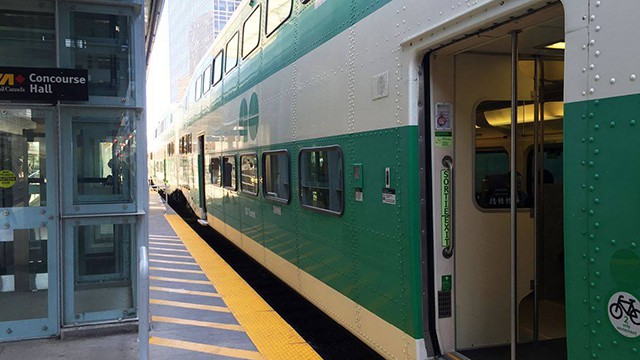 Do you regularly take the GO train in and out of Mississauga? If you’re like so many other GTA commuters, you know that the one thing that makes the relaxing morning/afternoon commute just a little extra fun is the music coming from your headphones.

So what would you say if you found out that there are two Spotify playlists aimed at making your commute a little more lively?

“With the launch of two new music playlists powered by Spotify—GO Pop and GO Chill—GO travelers can now stream music by artists like P!nk, Justin Timberlake, Meghan Trainor, ZAYN, Camila Cabello and more on the GO Pop playlist – or John Mayer, James Arthur, John Legend and  Ruth B among others on the GO Chill playlist,” Metrolinx said in a statement.

The partnership announcement came during a live performance by Cold Creek County in Union Station.

Customers and fans alike enjoyed a four-song set by the popular Canadian act.

GO Pop and GO Chill are handpicked to appeal to a variety of musical tastes and simultaneously designed to flow smoothly,” Metrolinx says.

“Both playlists are to be refreshed weekly. Any Spotify users can stream Go Pop and Go Chill now or download the playlists for offline listening with a Spotify premium membership.”

To listen to the playlists, go to GO Pop & GO Chill.