Someone Like You: A Mississauga Author’s Debut Novel Available on Amazon 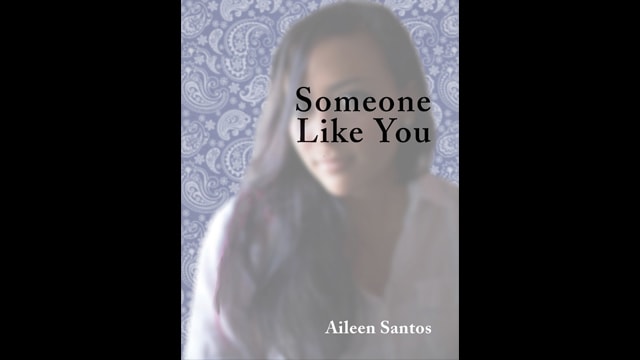 When Aileen Santos began reading an excerpt from her debut novel, Someone Like You, at an intimate and cozy launch party in Hamilton back in May, the mood changed. The passages were ominous and disquieting and Santos sounded appropriately somber (but not nervous) when she described the insidious and escalating abuse the protagonist was experiencing at the hands of her strict, cruel and overbearing father.

The crowd in the Hess Village-area CIRCA gallery was completely silent as Santos read the excerpt. It was difficult to listen to. It was raw and terrifying. It was uncomfortable. The worst part came when Santos described the main character pleading with her mother for help, only to be ignored entirely.

Someone Like You is a heavy and, at times, seemingly personal inaugural novel that offers readers a compelling and uncompromising slice of life tale about abuse, falling in love, falling out of love, depression, loneliness, fear and forgiveness. Recently published by Two Wolves Press and available for sale on the publishing company’s website, the book has an appealing rough-around-the-edges quality. It feels like a debut novel, like the first step of many on an author’s path to mastering her storytelling voice.

Although it’s fiction, it borrows heavily from the author’s experiences and is mostly set in Mississauga — the city Santos and her family settled in after leaving the Philippines when she was a child.

“It is fiction, but writers write a little bit of what they know,” Santos says. “Some is exaggerated and some is completely made up. It’s imagination unleashed. There are similarities [between me and the protagonist, Vanessa]. I am a teacher, I went to McMaster University, and I lived in Asia for a year.”

The launch, an intimate event held in an appropriately creative venue, felt incredibly special. Not at all stuffy or tainted with the air of pretension one might expect to sniff at a literary affair, the gathering absolutely radiated — cliché thought it may sound — good energy. The entire experience was moving. Everyone had gathered to support and celebrate a growing writer’s monumental accomplishment.

Publishing a novel isn’t easy, especially for someone with two children, two pets, a home and a full-time career.

“It took me officially four years when I started doing it consciously. I wrote the excerpt from the reading in 2007,” she says. “[As for writing a novel], it was all very organic. I was in journalism and my undergrad was women’s studies and religion at McMaster. After that, I was doing community service jobs and I took a postgrad journalism program at Humber. I got a job after a year working at the desk at 299 Queen St, it was Chum TV at the time. Journalism wasn’t fulfilling. I’m more of an introvert. I like making connections, I like relationships. I like to sit back and listen to people. When I write a story, I get inspiration from what I’m going through or people’s stories.”

The novel’s main character, Vanessa Soares, bears a striking resemblance to Santos (even some of the visual descriptions in the novel match up). Soares, a young mother, is the daughter of Filipino immigrants. She grows up in Mississauga, attends McMaster University in Hamilton, spends a year teaching in South Korea and marries her high school sweetheart — all things Santos herself did.

“There are similarities, but it’s not autobiography,” Santos says. “The abuse and first love, those are universal. Other women have gone through them. It’s inspired by other people’s lives and my own life and women I find amazing.”

Although the story is initially centered on a lost and brooding Vanessa, a young mother on maternity leave suffering from baby blues, a stale marriage and a fading sense of purpose, her mother’s story becomes important as the novel progresses. When the story begins, the mother-daughter relationship is strained by silence and indifference. The two women almost feel like strangers, connected only by Soares’ infant son.

As Vanessa withdraws deeper into rose-coloured fantasies about her first love, the reader learns more about Maria, an emotionally and sometimes physically battered wife who left the Philippines (and an appallingly abusive family situation) behind to start a new life in Canada with her angry, philandering and sometimes violent husband.

While it’s still hard to forgive Maria’s distance from her daughter (perhaps even impossible), she becomes easier to, at the very least, understand.

“[Whether or not to forgive Maria] is up to the interpretation of the reader,” Santos says. “Women have complicated relationships with their mothers and sisters.”

The other central theme is romantic love and the depiction is, to be clear, not quite so romantic. Vanessa, bored in her long-term relationship with husband Curtis, pines for her first love, John. John was Vanessa’s first boyfriend and the boy she risked her father’s heinous wrath to see during her tumultuous high school years.

It is very apparent to the reader that John and Vanessa’s relationship is one-sided. That truth is never apparent to Vanessa, even after John behaves insensitively during an intimate encounter and turns cold on her.

Although Vanessa and Maria’s personal struggles are devastating and compelling, the story really comes to life when it lets readers see John and Vanessa’s fraught relationship from a distance. Santos explores the all too familiar scenario of a young person conflating sex with love and opportunism for devotion. The reader always knows who John is and, interestingly enough, Vanessa never does.

“There was a wonderful book [Student of Weather by Elizabeth Hay] where a single mom pined for the father of her child,” Santos says. “I just remember seeing her as a strong woman who kept pining for a man who wasn’t interested, but it didn’t diminish her strength as a woman. The men in this book didn’t matter — the men were plain, their names were plain. They could be any man you had an experience with. This was a story for women. It was about the strength of women.”

Although the novel borrows from the author’s real life, it is ultimately a work of fiction. That said, Santos admits it’s hard not to feel vulnerable when telling a challenging and emotional story.

“Writing can be dangerous and truth telling and it can make you feel vulnerable. People I worked with didn’t know I was writing a book. I hesitate to tell my students.”

She also said that it’s good to have a strong support network during the writing process.

“You have to have a strong relationship. I can read parts to my partner and he’s been supportive, but some people can’t publish because the people they live with feel threatened.”

But although it can be hard to release a novel with nuggets of universal truth and parallels to real life, Santos says it’s worth it.

“Writing is part therapy and I can’t stop,” she says. “I try to do well, but my rebelliousness is in my writing. You can’t let people dictate what you write if you’re not telling secrets. If there are good intentions and a purpose, you can’t stop it. It’s a gift. It’s a privilege to get these words on paper. If people love you then they love you and they’ll get over it or learn where you’re coming from.”

Someone Like You is now available on Amazon for $21.95.