Some Troubling Numbers Regarding Home Ownership in Mississauga

At a time when one major report has officially indicated that it’s quickly becoming cheaper to own a home rather than rent one, it’s interesting to note that—according to another report—home ownership rates are declining across Canada.

A recent report by international real estate portal Point2Homes indicates that homeownership rates in Canada are declining for the first time in over 45 years, with 11 out of 13 provinces seeing drops.

Point2Homes says that, according to the 2016 Statistics Canada results, five years was enough for the percentage of homeowners to decrease in 88 of Canada’s 100 most populous cities, in some cases by as much as 7 per cent. 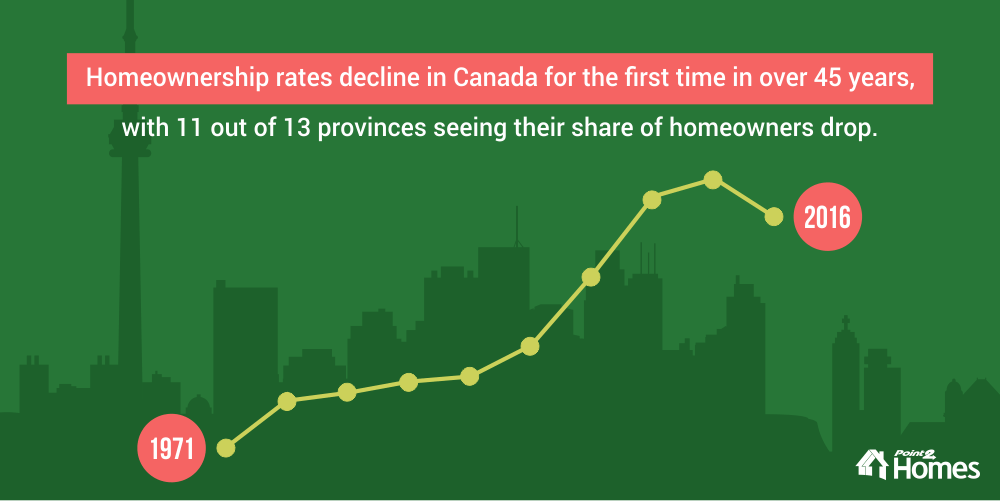 The report finds that in 2016, the share of homeowners decreased in 17 of the 20 cities that posted the most significant increases in homeownership rates up until 2011.

Interestingly enough, the highest homeownership rates can be found in Peel.

Point2Homes says that, at 90.8 per cent, Caledon has the highest homeownership rate of all the cities included in its analysis.

Montreal posts the lowest percentage of homeowners at 37 per cent. 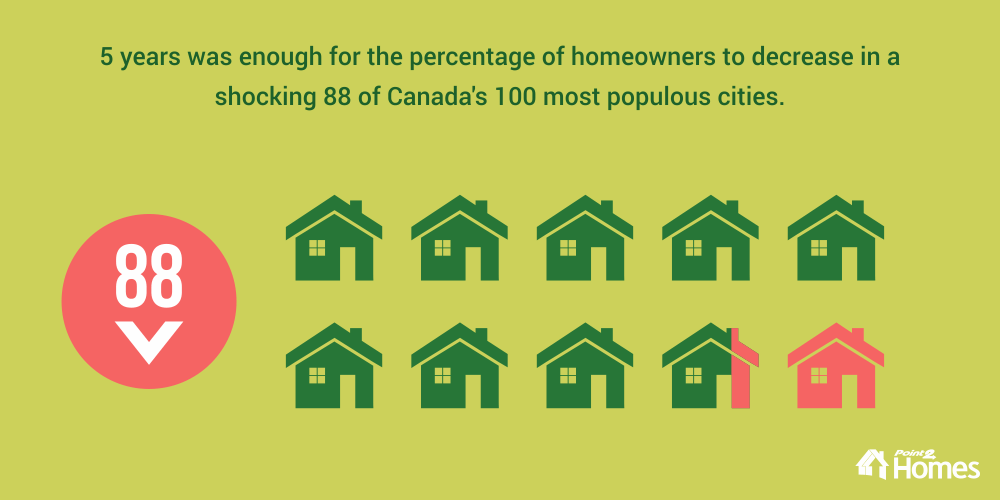 “Canada is predominantly a nation of homeowners. The majority of Canadians own their dwelling, with only 32 per cent of the total population resorting to renting, according to Statistics Canada,” Point2Homes says.

In Brampton, the story is different. Homeownership rates have actually climbed 3.9 per cent, going from 77 per cent in 2001 to 82 per cent in 2011. Now, rates sit at 80 per cent (higher than Peel counterpart Mississauga).

So, what’s gone wrong other than sky-high home prices in some of Canada’s most expensive cities?

“The collapse of oil prices and the country’s heavy reliance on exports to its Asian partner pushed Canada into a recession. The ensuing economic deceleration affected wages, hence lowering people’s purchasing power. Home prices, however, kept going up, leading to the decline in homeownership rates revealed by the 2016 Statcan numbers,” the report reads.

And while rent is expensive, more people were pushed into the rental market as the economy became more challenging.

Point2Homes says 4.6 million Canadians were renting their home at the time of the last Census, taking the proportion of households that rent from 31 per cent in 2011 to 32.2 per cent in 2016.

That said, homeownership is still the norm in Canada, as owners outnumber renters more than two-to-one.

The report says that while Montreal, Victoria and Vancouver have long been renter-dominated, none of Canada’s 100 most populous cities switched from owner-majority to renter-majority between 2011 and 2016, according to Statcan.

The report says the cases that stand out are Airdrie, AB and Milton. Despite a significant growth in population (46 per cent and 32 per cent respectively), the share of homeowners in these cities went down.

In some cities, homeownership rates have actually risen.

Point2Homes says that since 2001, homeowners became the majority population in four of the cities included in its analysis; Quebec City, Sherbrooke, Saint -Jerome and New Westminster, BC. As for what’s driving this, Point2Home says affordable condos are a factor.

Naturally, Toronto and Vancouver are also high on the list of cities with the lowest share of homeowners.

However, their presence in this ranking is mostly due to economic factors, the report says.

“Given they are two of the country’s most important financial hubs, people mostly come here for the substantial business and job opportunities and opt for the flexibility renting affords them. Moreover, the prohibitive home prices in these cities also represent a major impediment to would-be homeowners.”

“No fewer than 37 of Canada’s 100 biggest cities have seen their homeownership rates go down compared to 2001, and demand for rental housing is starting to outpace homeownership for the first time in decades, as reported by the Canadian Rental Housing Index,” says Point2Homes.

“Only time will tell if this was just a bump in the road to the increasing trend in homeownership that started in the early 1970’s or is the beginning of a decline initiated by the economic events after 2011.”