Some Residents Upset About Major Land Re-Development Plan in Mississauga

Back in the beginning of May, Mississauga Councillor Jim Tovey confirmed the development project that was going to take place on the old Imperial Oil site in Port Credit. It was announced afterwards that a public town hall would take place later this month to give more details to resident of Mississauga about this development proposal.

First to recap, this is the parcel of land in question, in proportion to Port Credit in Mississauga. 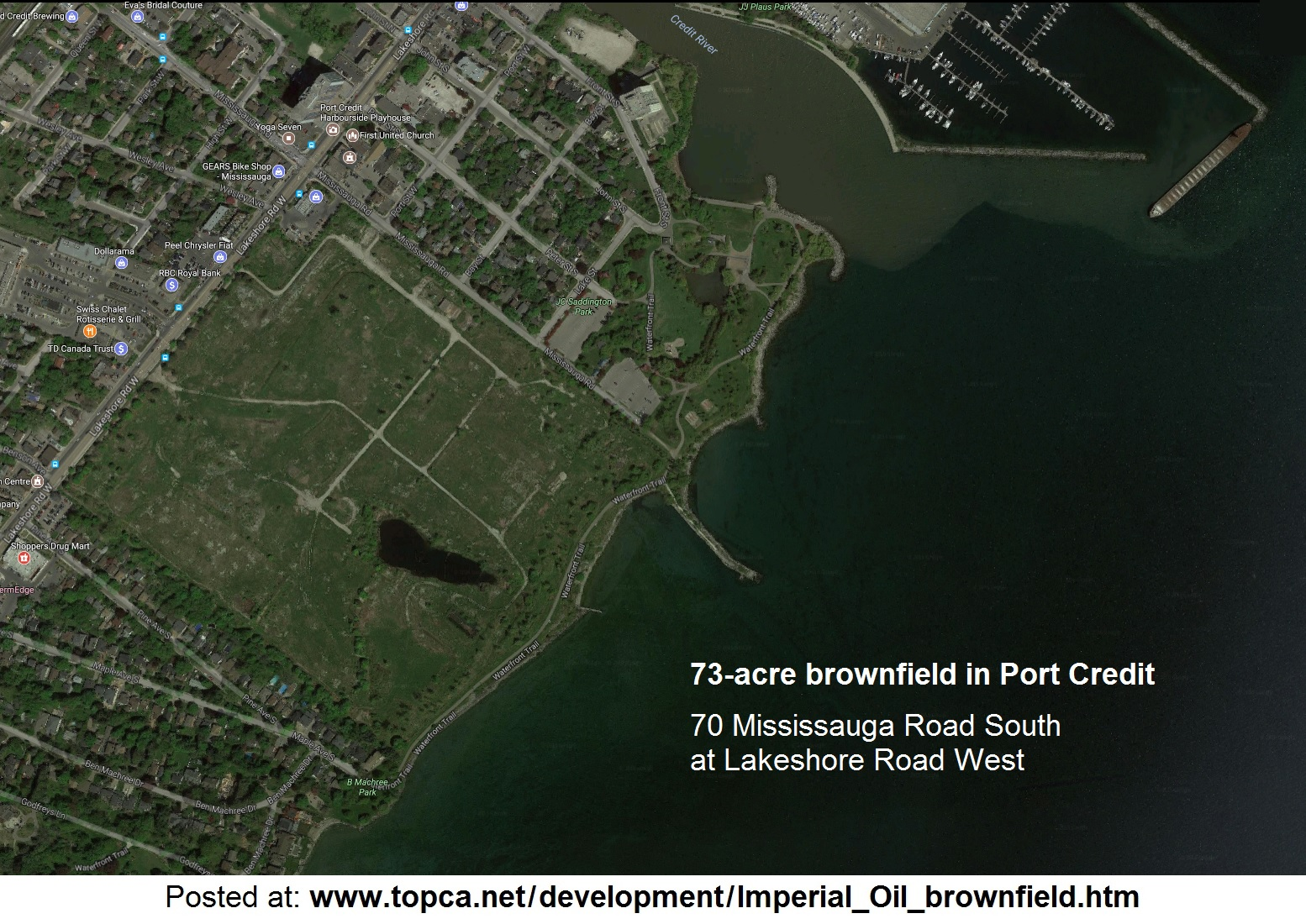 The town hall took place last week at Clarke Memorial Hall in Port Credit, which sits just right next to the Imperial Oil lands. Before the meeting began, I had a brief conversation with a young woman who just moved to the Toronto area from Singapore. She was there with her aunt who wanted to attend the meeting. She told me she was very surprised that this kind of public meeting regarding a development on property would even take place, let alone allow people to give input. In Singapore, there really isn’t any public input; when the government decides to put up a development, it just happens. 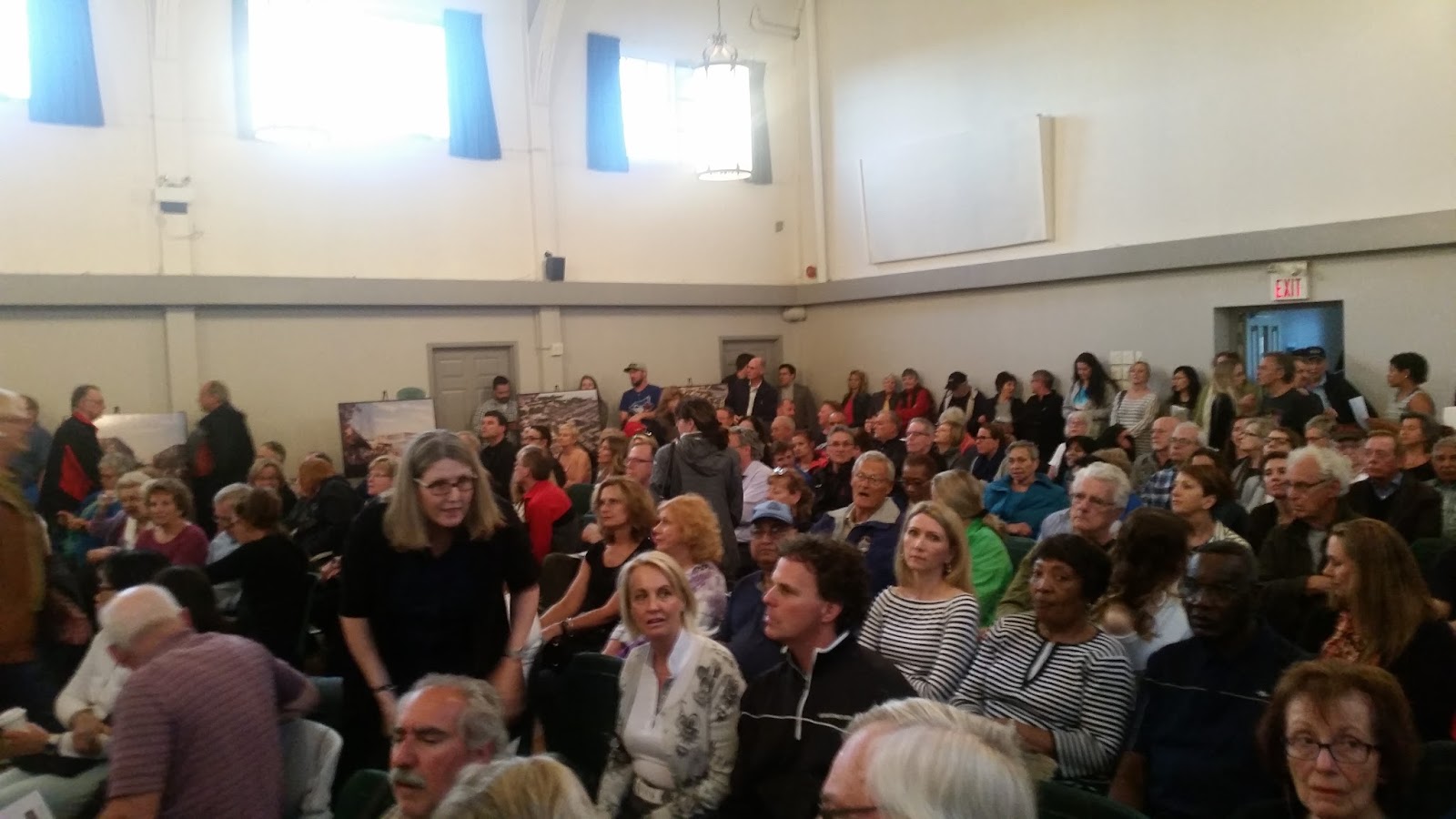 As you can see not only do public meetings in Port Credit take place, they are very well attended, so much so that extra chairs had to be laid down on some space off to the side of the front stage, and even still there were people left standing in the back of the room. I’m positive that this is not the prevailing view of the entire crowd of attendees, but I spent two hours sitting next to an elderly man who basically was NIMBYism personified; he literally said NO to every single proposal that was being outlined during the presentation.

Now I’m sure that not every person in attendance at this meeting was against the development outright like the man I was sitting next to, and obviously all of Port Credit’s residents were not in the room. But these were the people who came out, so how else would people gauge the reactions from residents unless it’s through people who took the time to come and respond? One interesting picture that was displayed kind of sums up the attitudes of Port Credit in relation to the rest of Mississauga. 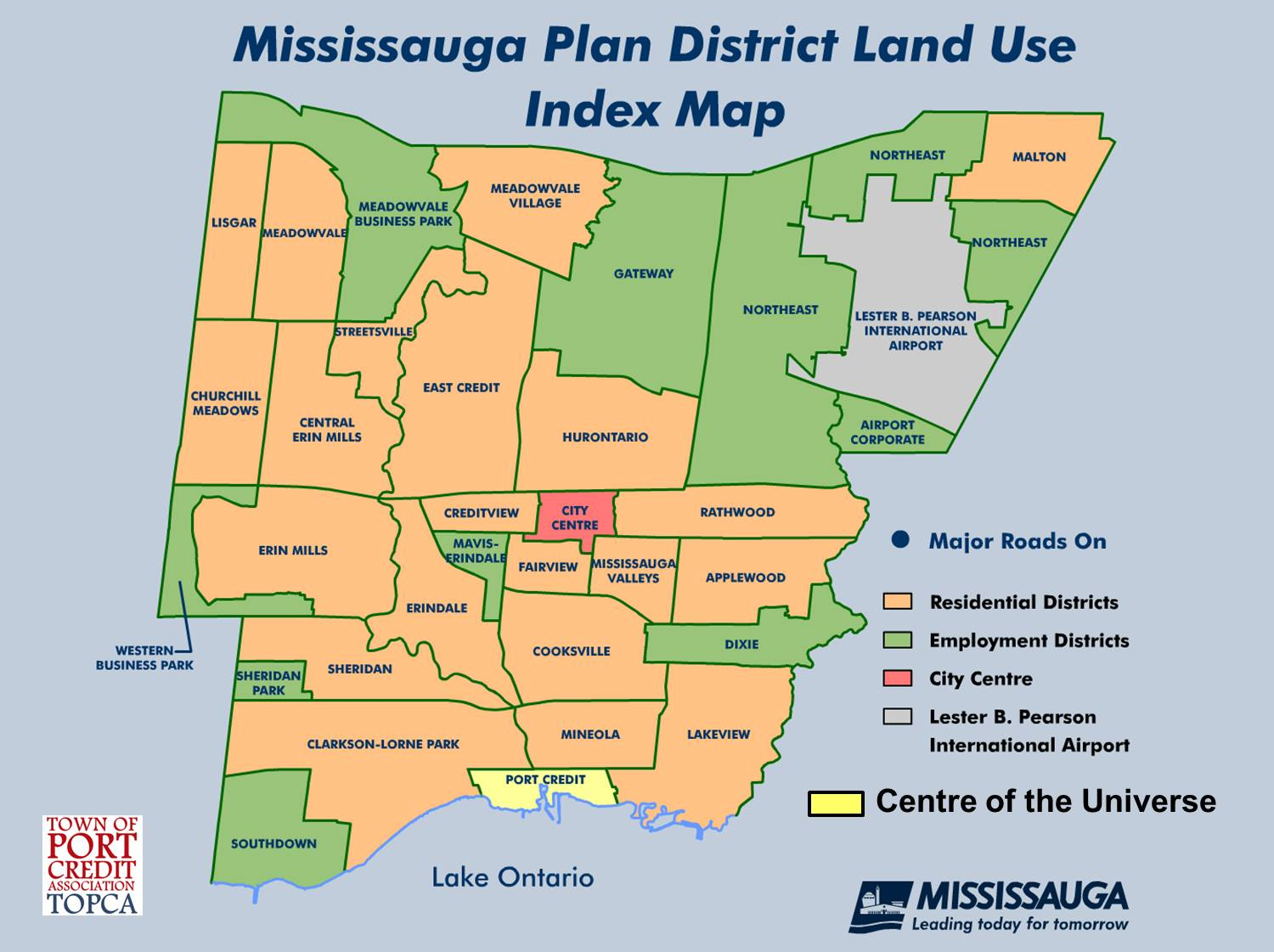 I doubt something like this would make it on the projection screen inside City Council chambers.

As outlined by one of the presenters, this video sums up what the whole Imperial Oil plan, now known as West Village, is all about:

One interesting point of note is that the West Village property is about 73 acres. Just to give you an idea of how big this land is, two doctored images were shown, demonstrating that the land was big enough to fit the property surrounding the Eiffel Tower in Paris, France, or most of Square One.

One of the presenters, Pino Di Mascio from Urban Strategies, also outlined the five principles that West Village is supposed to focus on based on the Inspiration Port Credit Master Plan: 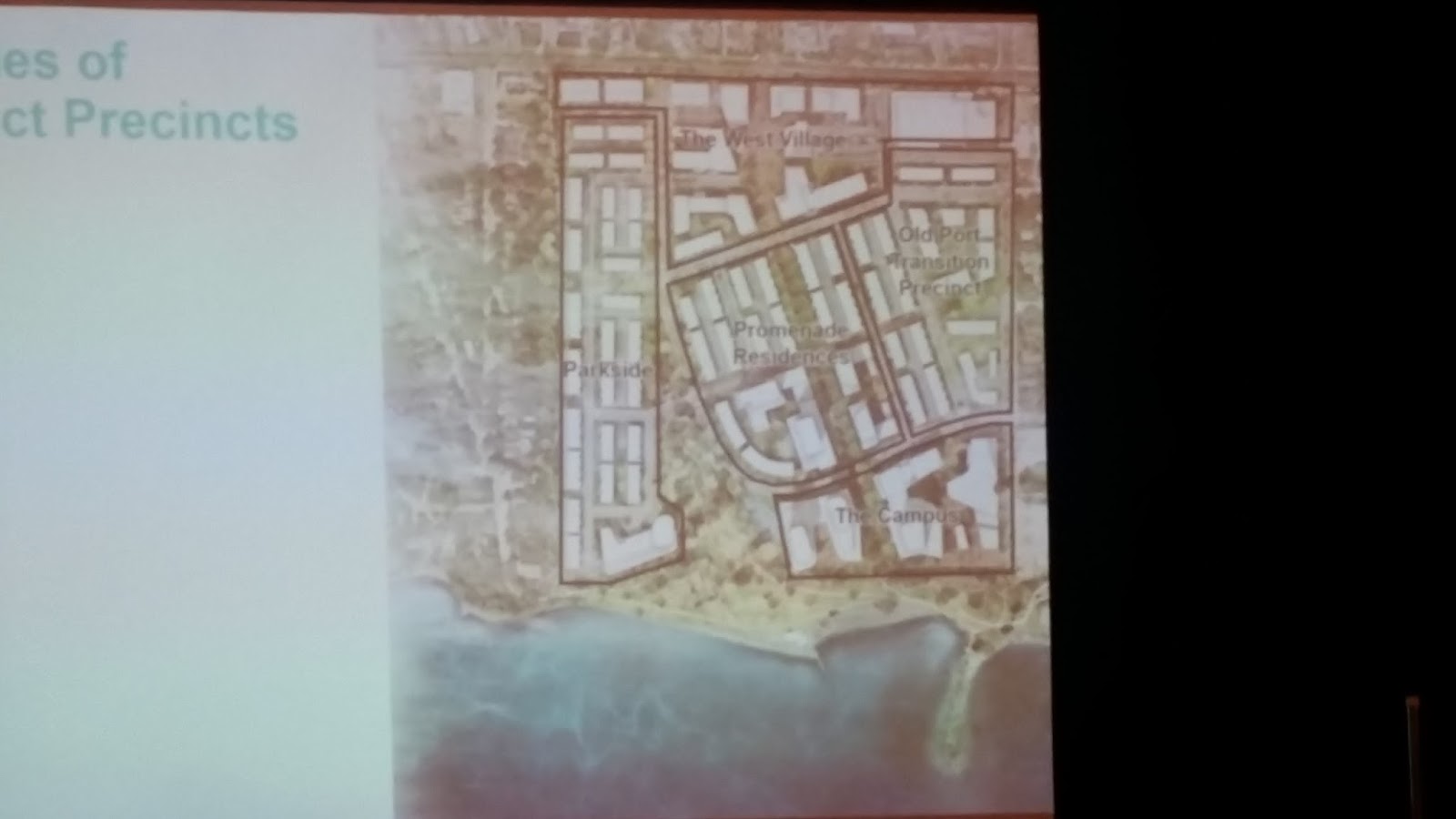 Di Mascio outlined a point that undoubtedly had some in attendance cringing. He mentioned that there was an emphasis on building more low to mid-rise residential buildings, but the caveat being that there will be five high rise towers between 17 to 24 storeys located in one area of the lands, particularly close to the waterfront. This was apparently the take away; allow more mid to low-rise developments that traditionally fit the Port Credit mode, while allowing some high rise residential buildings focused in one area.

If you watch the video posted on this article, those high rises are the cluster that resemble diamonds that remind me of the new Ryerson Student Centre in downtown Toronto. I don’t think having the condos is a major problem; most people in the room weren’t against them but the prevailing view seemed to be that they should be closer to Lakeshore Road.

Another resident asked if the height restrictions can be capped at 14 storeys, and move them to the centre of the lands. Attendees in the room sounded concerned that putting high rise condos by the lake would mean a trend towards the plethora of condominiums that dot the Toronto waterfront, although Di Mascio insists that their vision will be nothing like the Toronto waterfront.

Some people brought up the issue of wild animals now inhabiting the property. With the Imperial Oil lands being vacant for at least 10 years now, the notion of wildlife moving in as nature kind of retook the former industrial site isn’t that far off. But Councillor Tovey made an interesting point during his concluding remarks; if this site is contaminated as many people claimed and an Environmental Assessment and soil remediation are required, then why would people think animals would be living there? Animals have an instinctiveness within their DNA to detect whether a habitat is suitable or not, do they not? They would not deliberately live in a place where they could sense the land was contaminated.

Finally, for those of you who think the site needs more land set aside as park land, the Parkland By-Law for Mississauga is a minimum of five per cent; West Village has 16 per cent of land allocated for park land.

What was striking to me in this meeting was some of the dynamics surrounding certain personalities of the Port Credit Residents Association. Dorothy Tomiuk, whose LinkedIn profile lists her as “Citizen Activist,” was the moderator for the meeting. When people got up to ask questions at the microphone, there was a very tense moment when Tomiuk cut off the questions after four or five people asked a few questions and made some remarks.

Yes, Tomiuk did say that the previous person before the woman in the yellow dress was to be the last questioner, but that woman in yellow was literally the only person standing in the line, so there would have been little harm in allowing her to speak. The video didn’t show it, but Ms. Tomiuk literally just took the microphone out of that other lady’s hand, to the chorus of boos heard in the background.

In the end, it’s much better to have something rather than nothing on this piece of land that Imperial Oil had for years that has been sitting empty all this time. I honestly don’t think a good chunk of people in attendance that night, including the man who was just spewing NIMBYism sitting next to me, will be around long enough to reap its benefits. Frankly, it’s hard to get people anywhere to think long term about how this benefits people down the road who aren’t living in Port Credit yet, because people are very caught on on how changes will affect them directly..right now.

However this West Village development turns out, it’s going to have to be diversified enough that it caters to people from all age groups, and housing has to be affordable enough for people to live in it. If you’re a retired couple, do you really need to live in a detached house with a two car garage anymore? That might not be popular to hear, but it’s the impending reality of a growing city like Mississauga.

5 unbuilt projects that could have changed...
Top 5 Chicken on the Rocks in Mississauga
Five fun things to do this weekend that are...
Top 5 chicken sandwiches in Mississauga
5 fun ways to make the most out of your...
END_OF_DOCUMENT_TOKEN_TO_BE_REPLACED